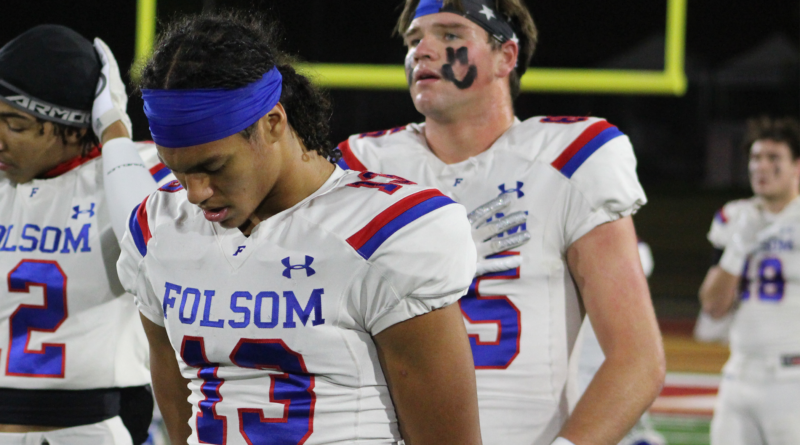 From Kimball quarterback Nicholas Coronado to Stockton Lincoln defensive back Jomarion Briggs, there were many standout performers in Sac-Joaquin Section high school football this season.

Coronado was the only quarterback in the state to throw for over 4,000 yards this season (4,315). He also tossed a state leading 56 touchdown passes compared to only five interceptions. Coronado led Kimball to a 10-2 record and the Division 4 playoffs.

Nichelson led the Section in rushing yards with 2,231. He also rushed for 36 touchdowns, which was good for second place in the Section, but he finished with the overall Section TD lead (44) because he caught seven scores. As a linebacker, Nichelson forced three fumbles and had a pick-six. Manteca won the Division 3 championship this season.

Taylor, nicknamed “Ponyboy”, rushed for 2,128 yards and 38 touchdowns for the Division 2 champion Raiders.

The St. Mary’s coaching staff tried to get the ball in Marshall’s hands as much as possible this season and it paid off as the Rams went 10-3, won the Tri-City Athletic League and made the Division 1 semifinals. Marshall finished the season with 563 receiving yards and five touchdowns, but that doesn’t tell the story. He’d line up in the backfield at times and catch a lot of backwards passes which led to him ending the year with 982 rushing yards and 11 rushing touchdowns. The UCLA commit also returned a kick and a punt for a TD this season.

Flores had a terrific junior season catching 81 passes for 1,157 yards and 11 touchdowns for the Division 1 champion Bulldogs.

Lyons is one of the top recruits nationally in the 2023 class. This season, he caught 42 passes for 646 yards and seven touchdowns.

Pale has received scholarship offers from the majority of schools in the Pac-12. He’s established himself as one of the top linemen not only in the Section, but in the state.

Noa had a strong junior season for Grant Union and has received scholarship offers from Cal and Fresno State.

Standing at 6-foot-8 and weighing 300 pounds, King helped lead Union Mine to a Sierra Valley Conference League championship this season.

Simien signed with Fresno State on the first day of the early signing period. He was named the the All-Central California Conference Lineman of the Year.

Piland is committed to Air Force. This season he made 43 tackles and had eight tackles for loss.

Finau had 11 sacks this season. He’s committed to Cal Poly.

Mercado led all defensive linemen in the Section in sacks this season with 14. In total, he had 31 tackles for loss.

Tremain finished third in the Section with 152 tackles this season. Sixteen of them came behind the line of scrimmage.

Loureiro led the Section in sacks this season with 18.

Crocket led the Section in tackles with 166. He also recovered four fumbles.

Aldrich led the Section in interceptions with 11. The next closest player on the interception list snagged eight.

Sampson was a two way standout for Capital Christian. As a running back, he rushed for 677 yards and seven touchdowns. He also caught 29 passes for 429 yards and four TD’s. On defense, Sampson used his speed to make 58 tackles and intercept one pass.

Patu will emerge as a big time recruit in his next two seasons of high school football. He’s a skilled receiver who hauled in 23 passes for 429 yards and eight touchdowns on offense this fall. On defense, he made 28 tackles, intercepted two passes and forced two fumbles.

McGriff was one of the top players for a Jesuit team that came the closest to knocking off Folsom in the Section playoffs this season (the Marauders fell 22-21 to Folsom in the Division 1 semifinals). McGriff intercepted three passes on defense and made 23 tackles in 2021. He was a stud on offense as well rushing for 879 yards and 13 touchdowns. McGriff also caught four touchdowns.

Briggs is a Fresno State signee. He intercepted five passes this year.

Till made a Section high eight field goals including a 43 yarder this fall. He went 23 for 25 on PAT’s.

Verdugo averaged 39 yards per punt and had the most punting yards in the Section this season with 1,520. He pinned opponents inside their 20-yard line 11 times this fall, which was good for second in the Section.

Soares returned two punts for touchdowns this season. He was also a very effective kick returner, averaging 25 yards per return.