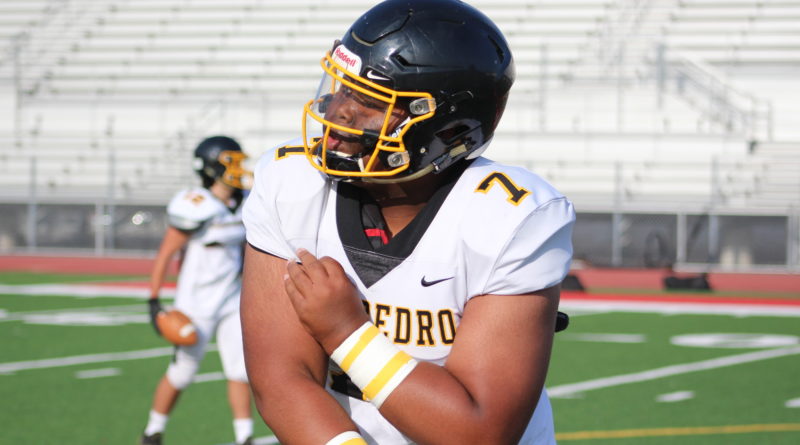 Jackson established himself as QB1 in the LA City Section this season. He completed 63.8% of his passes for 2,280 yards, 32 touchdowns and only two interceptions.

Anoh was named the Western League Player of the Year after rushing for 1,419 yards and 21 touchdowns to lead Palisades to an 11-1 record and one of the best seasons in school history. Anoh averaged a first down every time he carried the ball finishing the year at 10.6 yards per rush.

Collins led the Section in rushing yards with 2,492. He also scored the longest touchdown run in the City Section this season when he rushed for a 98-yard score against Arleta in the Division 1 playoffs. Collins finished the season with 26 touchdowns averaging 11.3 yards per carry. The senior also played defensive back for the Hunters and tipped away a pass against Franklin in the first round of the playoffs to secure an overtime win for Canoga Park. Few players, if any, had a bigger impact on their team than Collins did for Canoga Park this fall.

Boardingham put together a tremendous season for the Open Division champion Patriots. He rushed for five touchdowns and also caught 43 passes for 836 yards and 15 scores. Defensively, he made 67 tackles with eight coming for loss. He also returned a fumble he recovered for a score. On special teams, Boardingham punted for Birmingham pinning opponents inside their 20-yard line five times. Boardingham also returned two punts for touchdowns this season.

Ceballos led the City Section in receiving yards and touchdowns this season with 1,504 and 19 respectively. He was the only City wide out to average over 100 receiving yards per game (136.7).

In the absence of a truly great tight end in the City this season, we’re honoring a third wide receiver. Sarmiento did it all for San Pedro this year. He caught 35 passes for 612 yards and 12 scores. He also rushed for two touchdowns. On defense he made 19 tackles and he also returned a kickoff for a score on special teams.

Rivera established himself as the top two way lineman in the LA City Section this season. He’s a stud on the offensive line and on the defensive line, he made 62 tackles with 14 coming for loss.

Brown was named the Western League Offensive Lineman of the Year this fall. He was a major part of the Yankees 9-4 season. Hamilton finished as runners up in Division 2.

Williams was the top offensive lineman for one of the top rushing attacks in the City this season.

Anguiano was a top offensive lineman in LA City football this fall.

Kensinger showed he’s a legit college prospect in his senior season. Whether he lined up at defensive end or tight end, he made numerous game-winning plays for Venice this year. After recording 103 tackles with 18.5 tackles for loss, Kensinger was named the Western League Defensive Player of the Year.

As s the leader of Banning’s defense this fall, Ah-kiong made 51 tackles with 11 coming for loss. On offense, he produced punishing hits as a full back as well.

One of the biggest surprises of the fall was South Gate winning an outright Eastern League title. Following the Rams triumph, Abarca was named the Eastern League Defensive Player of the Year.

Barnes was a bruiser as a linebacker and running back this season. He made 85 tackles with 11 coming for loss in addition to forcing two fumbles and recovering one. On offense, Barnes had a habit of running defenders over. He finished the season with 845 rushing yards and 11 TD’s.

Duran put Arleta on his back this season. At linebacker, he made 53 tackles on the year, but it was his play at running back that really helped him clinch an All-City spot. Duran was one of only two LA City running backs to finish the season with over 200 yards per game. He ended the year with 2,218 rushing yards and a City Section high 31 touchdowns.

Villalobos led the City Section in tackles (156) and tackles for loss (33) this season.

Williams led the City Section with ten interceptions this season. He was voted the Coliseum League Player of the Year.

Waters is the only sophomore to make our All-City team. In Birmingham’s 24-14 Open Division championship win over San Pedro, he caught a 25-yard TD, had an impressive strip and fumble recovery on a San Pedro receiver and multiple pass breakups. Overall, Waters caught 19 passes for 346 yards and seven touchdowns on offense this season. On defense, he made 32 tackles, had one interception and forced two fumbles. He looks like the next great City Section football player.

Rattay is another two way standout. This season for a Lincoln team that went undefeated in the regular season, he snagged seven interceptions and made 51 tackles. On offense, he caught 32 passes for 716 yards and 13 touchdowns.

Ferrero was the best kicker in the City this year. He made a Section high nine field goals and 50 PAT’s.

Vergara had a great season as a punter averaging 39.9 yards per punt, which led the Section. As a kicker he made all 40 PAT’s he kicked.

Jackson was the most dangerous return man in the Section this fall. He returned a whopping four kickoffs for touchdowns and also brought back a punt for a TD.

Described by head coach Aldo Parral as a “Swiss army knife”, Andrade-Miranda did everything for Roosevelt this season as a running back, linebacker and special teams player.