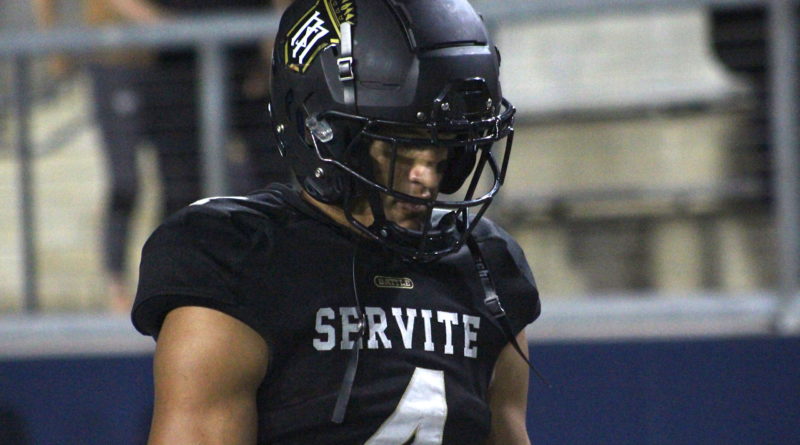 After a 56-12 win over Orange Lutheran in September, Servite head coach Troy Thomas called Tetairoa McMillan a “once in a career type of guy”. That’s how special the Friars’ senior has been this fall.

McMillan caught 88 passes for 1,302 yards and 18 touchdowns this fall. But what separated him from the rest of the Player of the Year candidates was his play on defense. Lining up as a defensive back for the first time in his career, McMillan snagged eight interceptions and made 35 tackles. He played so well on defense that some scouts think that defensive back may be his best position in college.

He also took a different approach off the field this fall.

McMillan is soft spoken, but before the season began Thomas hinted that he expected his star receiver to be more of a leader.

“TMac is leading now,” Thomas said in August. “He’s been a quiet kid and now I really like what he’s doing leadership wise. I feel really good about that. It’s going to make a big difference with our program and on our team.”

It ended up making a world of difference as Servite finished this season 10-3 and advanced to the CIF Southern Section championship game for the first time since 2010.

McMillan caught a touchdown in nine of Servite’s 10 regular season games. His best offensive performance of the year came against Orange Lutheran when he caught nine passes for 219 yards and four touchdowns, including one that went for a 72-yard score. Defensively, McMillan made a one-handed interception in that game as well.

In Servite’s 46-37 regular season loss to Mater Dei, McMillan had another monster game while battling one of the nation’s top defenses. He caught 15 passes for 167 yards and two touchdowns going up against 2022 Monarch corner and Cal commit Cameron Sidney, another 2021 SBLive California All-State selection.

McMillan’s best defensive performance of the year came in the first round of the Division 1 Southern Section playoffs against Santa Margarita. He intercepted three passes that night including one he returned for a touchdown which helped clinch a 34-3 win.

In Servite’s 27-7 loss to Mater Dei in the Southern Section championship, McMillan was the best player on the field. The Monarchs played suffocating defense in the game and the Friars only managed to complete 10 passes. McMillan caught eight of them for 67 yards and a touchdown. He also snagged an interception in the game, which was one of only six picks Mater Dei quarterback Elijah Brown threw this season.

McMillan is scheduled to sign his National Letter of Intent on the first day of the early signing period on Wednesday. He’s a longtime Oregon commit, but with the Ducks’ coaching change other schools are pushing hard to secure his signature.