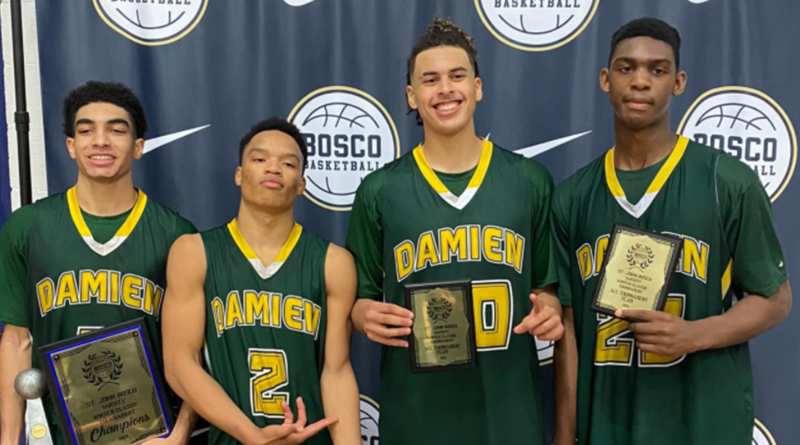 The winter 2021-22 California high school boys basketball season started on Nov. 15. Here’s a look at the top teams in the Southern Section a month into the year. SBLive’s Southern Section high school boys basketball rankings are compiled by SBLive California reporter Connor Morrissette and will be released every Monday throughout the spring 2021 season.

The Huskies lost to Texas power Duncanville 75-70 at the Thanksgiving Hoopfest showcase at Dickie’s Arena in Fort Worth, Texas in November, which is their only loss on the year. Corona Centennial has beaten Sheldon and No. 19 Notre Dame Sherman Oaks so far this season.

The Wolverines won the 2021 Rose City Round Ball Classic Championship at Maranatha High School two weeks ago, but dropped their first game of the year at Hoophall West to Mountain Pointe (Phoenix, Ariz.) 59-54 last week.

Damien has beaten No. 8 Riverside Poly and No. 9 St. John Bosco this season.

Mater Dei’s lone loss this came against Chicago (Ill.) Simeon 66-50 in a game that was close for three quarters. Mater Dei’s beaten No. 15 Etiwanda and Edison this season.

St. Bernard is playing like an Open Division team in the Southern Section. The Vikings beat No. 11 Bishop Montgomery 54-44 in the Westchester Tournament Championship. Darius Carr won Tournament MVP after scoring 30 points in the title game.

St. John Bosco advanced to the championship game of their Winter Classic tournament last week, but then fell in the title game 67-47 to No. 4 Damien.

Bishop Montgomery lost their first game of the season 54-44 to No. 6 St. Bernard two weeks ago, but the Knights have won seven blowouts outside of that defeat.

Crossroads beat No. 22 St. Anthony 69-57 on Nov. 19 and then fell to No. 3 Harvard-Westlake 61-53 on Nov. 20. Last week, they won the Beverly Hill High School tournament after beating West Ranch and Santa Clarita Christian.

Despite a close defeat to No. 24 Foothill, JSerra has started the year strong and moves to No. 13 thanks to wins over No. 15 Etiwanda and Tesoro.

Going into last week, Etiwanda had beaten all six of their opponents by double digits, but they then fell to No. 5 Mater Dei and No. 13 JSerra.

Colony is off to a 7-0 start with their best wins coming against Mission Bay and San Clemente.

Santa Margarita has won all nine of its games in blowout fashion to begin the year.

Serra’s 79-70 win over No. 19 Notre Dame last week propelled the Cavaliers into this week’s rankings.

The Knights two losses this season have come against No. 2 Corona Centennial and No. 18 Serra Gardena. Notre Dame has beaten No. 20 Heritage Christian and Compton so far this season.

Heritage Christian’s lone loss this season came against No. 19 Notre Dame 61-53 on November 18th. Since then, the Warriors have beaten San Marcos and Alemany.

Fairmont Prep is in COVID protocol, but in their two most recent games, they fell to No. 4 Damien and beat No. 22 St. Anthony.

The Saints have beaten St. Monica, Campbell Hall, Inglewood and Beckman so far this season and lost to No. 17 Crossroads 69-57 and No. 21 Fairmont Prep 61-46.

Village Christian beat a good St. Francis team earlier this year and they hung tough with No. 6 St. Bernard in a 63-60 overtime defeat two weeks ago. This past week, Village Christian fell to No. 3 Harvard-Westlake 78-40.

Foothill upset No. 13 JSerra last week 69-64 but then followed up that performance with a 62-52 loss to Edison.

Canyon returns to the rankings this week. They’ve lost to No. 8 Riverside Poly in overtime and Lakewood this season, but beaten Hillcrest and Sonora.