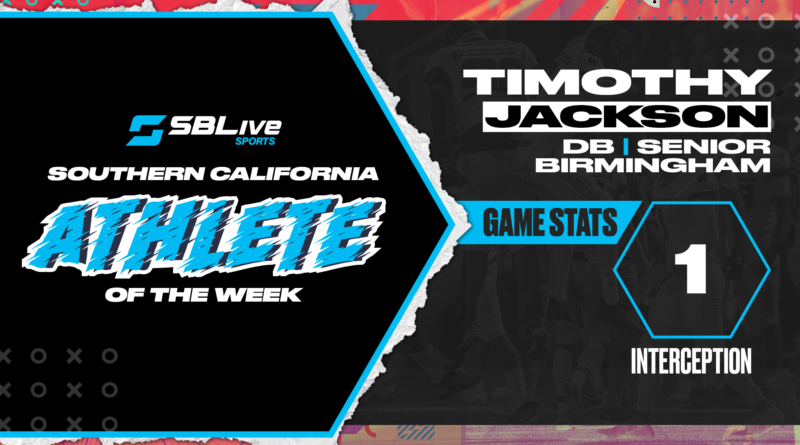 Congratulations to Birmingham defensive back Timothy Jackson for being voted SBLive’s Southern California High School Athlete of the Week for Nov. 29-Dec. 5!

The senior intercepted a his eight pass of the season on Saturday night, sealing the 42-35 win over Patrick Henry.

Jackson received 52.21% of the vote, beating out Birmingham QB David Jordan-Oliveros who finished second with 42.89%. Patrick Henry QB Malachai Ghitman finished third with 0.95% and Mater Dei Catholic WR Jerry McClure finished fourth with 0.74%. There were over 18,000 votes tallied this week!

We are currently accepting Southern California Athlete of the Week nominations. If you would like to nominate an athlete, please email sblive-social@scorebooklive.com or message us on Twitter or Instagram at @sbliveca.

Jackson rushed for 229 yards and three touchdowns in Friday’s shootout with Cathedral Catholic.

McClure caught six passes for 124 yards and a touchdown against Helix on Friday.

Leatherwood was 18 of 26 for 438 yards and five touchdowns to help the Falcons take down Valencia on Saturday night.

Lawlor caught six passes for 218 yards and three touchdowns against Valencia. He also tossed a 30-yard touchdown pass in the 45-38 win.

Wenger caught seven passes for 163 yards and a touchdown against Valencia.

Moten had two interceptions including the game-winner in the end zone as time expired.

Denmark rushed for three touchdowns against Venice on Friday night.

Ghitman passed for 219 yards and three touchdowns while leading a comeback against Birmingham. He also rushed for 66 yards.

Lux rushed for 144 yards and two touchdowns against Birmingham on Saturday.

Jordan-Oliveros passed for 209 yards and a touchdown and also scored twice on the ground against Patrick Henry.

Barnes rushed for 127 yards and scored the game-winning touchdown against Patrick Henry on Saturday night.

Dupleasis had 184 all-purpose yards and two touchdowns against Palo Verde Valley on Friday.

Sousa had 164 total yards and three touchdowns in a 21-9 win against Serrano.