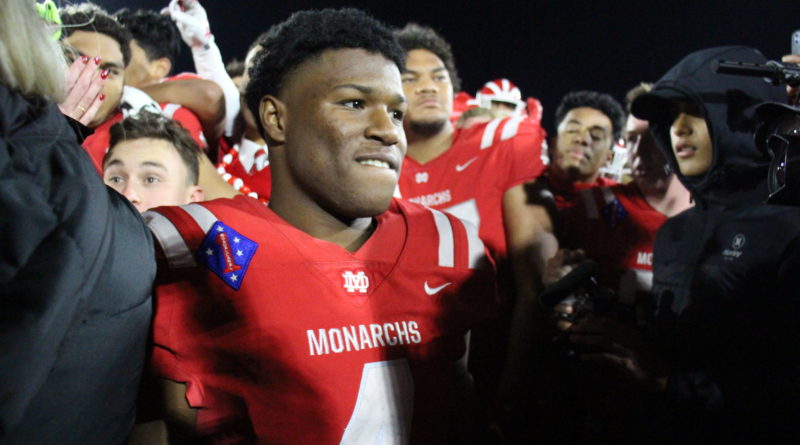 MISSION VIEJO, Calif. — Patrick Walsh has won 171 games as head coach at San Mateo Serra, and as a high school football player at Concord De La Salle he rushed for over 4,000 yards. He has played and coached against some of the best teams in California high school football history. Despite all of that, prior to Saturday night he’d never encountered anything close to what Mater Dei did defensively in their 44-7 CIF Open Division state championship victory.

At the half, Mater Dei led 24-0. The Monarchs dominant defensive performance was the driving force behind the school’s third state title.

Here are three observations from No. 1 Mater Dei’s impressive victory:

Sophomore quarterback Elijah Brown threw one of his best passes of the season when he connected with senior receiver Cooper Barkate on a 78-yard bomb, which put the Monarchs up 7-0 with 5:29 to play in the first quarter.

“I just put it out there for him to go get it and the rest is history,” Elijah Brown said.

Senior running back Raleek Brown, a USC commit, added three touchdowns on the ground in the win. His first came on a one-yard run, which made the score 21-0 Mater Dei with 1:31 left in the first quarter. Raleek Brown’s two other scores came on runs of two and 15 yards.

In 2017, Mater Dei took down De La Salle 52-21 to complete a 15-0 state championship season and on Saturday night the Monarchs clinched another perfect year against Serra. Mater Dei finishes the season 12-0 following their victory. Serra ends off at 11-2.

Mater Dei head coach Bruce Rollinson has been under the spotlight after the OC Register released a detailed report that revealed a lawsuit has been filed against Mater Dei for an alleged hazing incident stemming from a locker room fight in February.

After Mater Dei won the Division 1 Southern Section championship over Servite two weeks ago, Rollinson spoke to the media, but on Saturday night he did not.

Initially, Mater Dei players were instructed not to spoke with the media as well, but eventually school administrators allowed Elijah Brown and senior receiver CJ Willians to talk to reporters.

When asked how the Monarchs have “been able to focus and play so well despite the controversy” Williams responded: “I think it’s just the competitive nature of this team. I think we’ve all just bought in so much and we’re so dang close. We don’t want to let the person next to us down…We don’t want to let Coach Rollinson down.”

Before the game, a Mater Dei administrator said “I don’t know” after being asked if Rollinson was coaching his last game at the school.