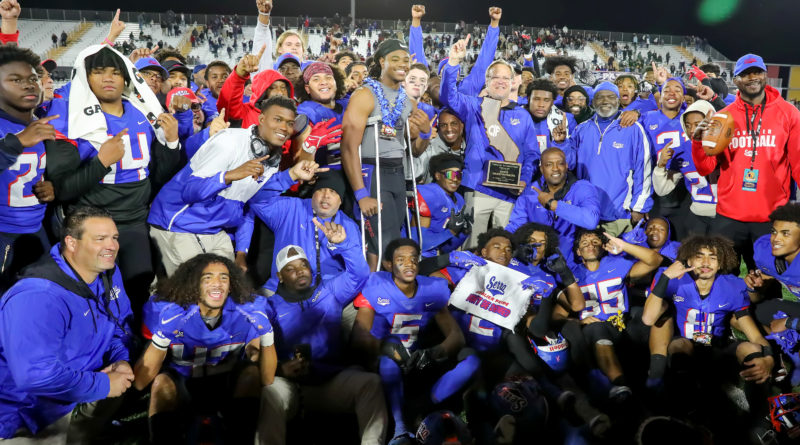 MISSION VIEJO­ – In yet another showing of defensive dominance, resilience, and clutch play, Serra (Gardena) held on to defeat Liberty (Bakersfield) 21-16 in the CIF 1-A State finals on Saturday at Saddleback College.

As has been the case with essentially all of Serra’s playoff wins, this game was a true defensive duel.

Liberty opened the scoring on a short field goal with 5:36 left in the first quarter. Serra, as it’s done many times this postseason, tightened up its defense in the red zone after a slow march by the opposing offense to hold off a touchdown.

The Cavaliers found the end zone first with 1:32 left in the first quarter on a rushing touchdown by Troy Crozier via a reverse from Cincere Rhaney. It was set up by a long first down on a Matthew Coleman catch from Maalik Murphy on third and 20 deep in Liberty territory, and it gave them a 7-3 lead.

However, that would be their only score of the first half, and Liberty would respond. The Patriots took a 9-7 lead going into halftime when Carson Woods took a keeper 39 yards to the house with 1:58 left in the second quarter. A botched PAT kept their lead at two points. Serra nearly retook the lead on the last play of the half as Maalik Murphy launched a Hail Mary into the end zone from midfield under duress, but it was intercepted by Luke Wattenbarger and returned some 60 yards after the buzzer sounded.

So, 9-7 was the score after a half, albeit not for a lack of good offense. The Patriots’ defensive front limited Serra’s running game very well for the whole evening, but it was their secondary that stole the show, blanketing Murphy’s targets and executing without any major lapses. The Cavaliers’ secondary was also locked-in and organized, and went the whole game without giving up the big play. However, it was their pass-rush that shined the brightest, as Woods had maybe half as much time and space to operate as Murphy.

The second half remained a defensive clinic. Maalik Murphy was able to lead a scoring drive capped off with a touchdown pass to Kai Honda that put Serra up 14-9 with 6:17 in the third quarter. And Liberty would never lead again.

Serra was on the verge of extending the lead early in the fourth quarter, as its offense was at a third and seven deep in Liberty territory. The Patriots blew up a draw play to end the drive and cool down their foe’s momentum a bit, but Serra responded by forcing a punt in turn. When the Cavs offense went back out, Murphy slung a 32-yard dart to Coleman from their 30 to get to Liberty’s 38. However, an emphatic sack following a play-action and scramble on third and two not only ended Serra’s drive, but ended Murphy’s night as well. He exited with 7:20 left in the game following a long injury timeout and had to be helped off the field, and did not return.

The waters were suddenly very perilous for Serra with their star signal caller injured, but the Cavs did not blink.

TRE’ HARRISON AND DAKODA FIELDS DO IT YET AGAIN

What do the Cavaliers’ CIFSS D3 title win against Apple Valley, bowl game win against Long Beach Poly, and state championship win against Liberty have in common? Serra freshman DB Tre’ Harrison recorded a fourth quarter interception in all three of them. In this one, it was a dramatic pick-six almost immediately after Serra’s ensuing punt following Murphy’s injury, which put them up 21-9.

“It’s honestly unbelievable,” said Harrison on what it feels like to step up in such a big way. “I didn’t even think I was going to be starting as a freshman, I thought I was just lucky to play. But my team helped me out throughout this entire season and pushed me through, and set me up in good position to make plays. All glory to God, and this is for you Dad.”

And on Liberty’s next drive, Dakoda Fields, another underclassman (sophomore), grabbed a fourth quarter interception for the second game in a row as well. That gave the Murphy-less Cavaliers the ball, to go with their 12-point lead, with about five minutes left in the game.

Woods regained his composure to lead a furious touchdown drive that he capped off with a touchdown run with 1:31 left in the game. A good PAT cut Liberty’s deficit to 21-16, but Serra recovered the following onside kick attempt to ice the game – and clinch a CIF 1-A state title.

If you’ve followed the Cavaliers over the last few years – or our coverage of them – you know that an unwieldy injury bug has been a constant theme since 2018. After their promising 2018 and 2019 campaigns were derailed by injuries, they finally got healthy in the spring season to win a Mission League co-title.

Heading into this fall, Serra suffered significant, in some cases season-ending, injuries to starters before the season even began. The Cavs started the season 1-3, with the third loss coming 14-0 against Warren when Murphy got injured early on and missed multiple games. They seemed doomed to see yet another promising season go to the wayside because of bad luck health-wise, but it didn’t end up that way.

“They’re resilient kids,” said Altenberg after the Apple Valley game. “When you only have 40 guys on your team, and 180 boys in the school, injuries are doubly impactful. This year, we’ve been able to overcome it because they happened early, we had a lot of new guys get reps early, and by the end, we were set to go.”

Not only did they have to overcome the loss of Murphy in crunch time – and Murphy celebrated postgame in crutches with a cast or wrap on one leg. But also, OG/IDL Marion Miller saw less time than usual as he’s been playing with a cast on one arm, and WR/DB Rodrick Pleasant, usually one of the fastest players in the state, has been playing hobbled, among a few other key Cavs. But the injury bug didn’t stop them from winning a CIFSS Division 3 championship and CIF 1-A state title before this senior class, which has been through so much, was gone.

“It’s been a while, 2012, since the last time we’ve been here, and I forgot how good this feels.” said Altenberg on Saturday. “We’ve been resilient, and this is just [another] instance of, one guy goes down, there’s a little bit of time left, and then we still make it happen. I’m so proud of the guys, the coaching staff, everybody, they’ve been so amazing.”

(All photos by Joe Bergman)