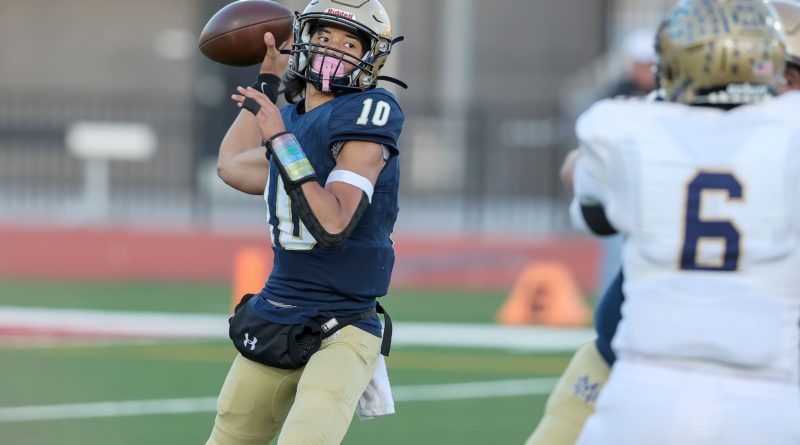 MISSION VIEJO, Calif. — There was no letdown from Mater Dei Catholic Friday night in their quest for an undefeated CIF State Championship. The Crusaders scored three touchdowns in the first nine minutes of the game and were able to hold off Central Catholic’s rushing attack for a 34-25 in the CIF D2-AA State Championship game.

Here are four takeaways from the game.

Mater Dei Catholic had their offense clicking from the opening snap on Friday, not facing a third down until the second half.

The Crusaders scored touchdowns on three of their first four possessions in the first half and had an 88-yard interception return for a touchdown by sophomore defensive back Isaiah Buxton.

“(Offensive coordinator Verlain Betofe) always preaches fast tempo and a fast-paced offense and if we jumped on them early it was gonna be hard for them to come back and that’s what we did,” junior running back Nico Mosley said.

Mosley rushed for a touchdown on each of the Crusaders’ first two drives of the game and added a third in the closing minutes of the third quarter.

“Everything goes through (quarterback Dominic Nankil) but the offensive line tonight was great, not just them but the running backs were picking up blitzes with some different and unique pressures and they handled it really well. When Dom’s on his feet, our guys are gonna go make plays,” Mater Dei Catholic head coach John Joyner said.

Central Catholic’s star senior running back Aiden Taylor continued his strong season on Friday night, rushing for two touchdowns including a 71-yard touchdown on the first drive of the second half but exited in the third quarter and wouldn’t return.

Taylor’s absence was crushing to the Raiders offense that revolves around a strong rushing attack and isn’t well suited for erasing second half deficits.

Fellow senior Julian Lopez performed admirably in the Taylor’s absence, scoring two touchdowns of his own but was unable to break any big plays in the second half.

Mater Dei Catholic was content with Central Catholic taking short yardage gains while chewing up clock in the second half. The Raiders finished off a 90-yard drive to cut the Mater Dei Catholic lead to 34-25 with 5:31 to play but their eight-minute drive left them without much room to get the ball back and score twice more.

Mater Dei Catholic’s defensive line comprised of six seniors stepped up in the second half as Central Catholic was forced to turn to their passing attack.

“Our defensive line is probably the most unsung group that we have,” Mater Dei Catholic head coach John Joyner said. “Luke Teskey, Joey Hiner, Jason Harden, Kenyon Lepisi those kids are phenomenal and then Frank Zhou and Josh Robinson off the bench, that’s six seniors. Everyone talks about our receivers; our defensive line has been our most consistent group we’ve had all year.”

Following Taylor’s injury, Central Catholic was able to only score on one of their final four drives, twice turning it over on downs deep in their own territory.

Mater Dei Catholic entered the season with high expectations and were able to navigate the season unbeaten while capturing all their goals along the way.

“I met with the seniors, and I asked them what their goals were,” John Joyner said. “It’s not my team, it’s not my year, it’s not my season. It’s about them and they said they wanted to win league, win CIF and win a state title. They wanted to go down as a team that gets remembered forever. It’s not my goals, it’s their goals and I’m gonna do everything I can to facilitate their goals.”

The Crusaders beat all eight regular season opponents by double digits and cruised through the San Diego Section Division 3 playoffs.

“We’re very accomplished and we’re very fortunate and blessed for the position we’re in and we couldn’t be prouder of our teammates,” junior running back Nico Mosley said.”

Mater Dei Catholic received their first test of the season last week against Helix in the Southern Region bowl game, stopping the Highlanders on a last-minute drive for a 24-21 win, preparing the Crusaders as they headed into Friday’s game.

“It’s a grind, a lot of things have to go your way,” John Joyner said of winning his second state championship with the Crusaders.

“There was a lot of doubters preseason,” Mosley said. “People didn’t believe what we were gonna be able to do but our team stayed solid to each other and worked hard in the offseason, we believed in each other, and the success is right here.”