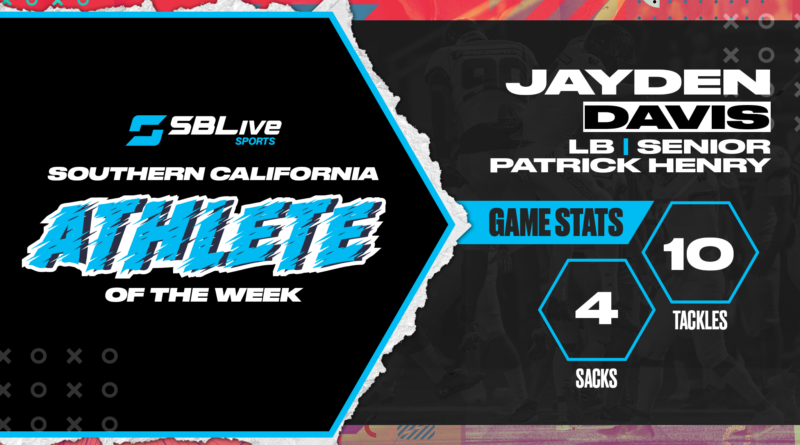 The senior had ten tackles and four sacks in Friday’s 49-21 win over University City.

Davis received 58.81% of the vote, beating out Newport Harbor WR Kashton Henjum who finished second with 17.57%. Serrano RB Rigo Cabral finished third with 12.49% and Venice RB Robert Lamar finished fourth with 6.12%. There were over 32,000 votes tallied this week!

Jones averaged 35.3 points in four games, leading Corona Centennial to a 3-1 record to start the season.

Ruff was 37 of 55 passing for 324 yards and five touchdowns in Friday’s loss to Colony.

Stahl reeled in ten passes for 112 yards and two touchdowns against Colony.

Brown had 162 rushing yards and a touchdown in Friday’s championship win over Servite.

Feinberg passed for 250 yards and four touchdowns against Hamilton on Saturday.

Zella passes for 249 yards and three touchdowns and also rushed for 75 yards and a touchdown against Newport Harbor.

Crawford passed for 101 yards and a touchdown and also rushed for 128 yards and two touchdowns against Compton.

Cabral rushed for 182 yards and a touchdown on 28 carries in Saturday’s win over Buena.

Washington rushed 45 times for 181 yards and four touchdowns to lead the Highlanders past Lincoln for the San Diego Section D1 Championship.

Robinson rushed for 178 yards and a touchdown against Helix on Saturday night.

Teskey had three sacks on Saturday, helping the Crusaders take down Ramona, 37-10, for the San Diego Section Division 3 Championship.

Macon rushed for 209 yards and two touchdowns on only 14 carries to beat Mission Bay for the San Diego Section Division 5 Championship.

Jackson caught five passes for 119 yards and a touchdown in a 36-9 win over Canoga Park.