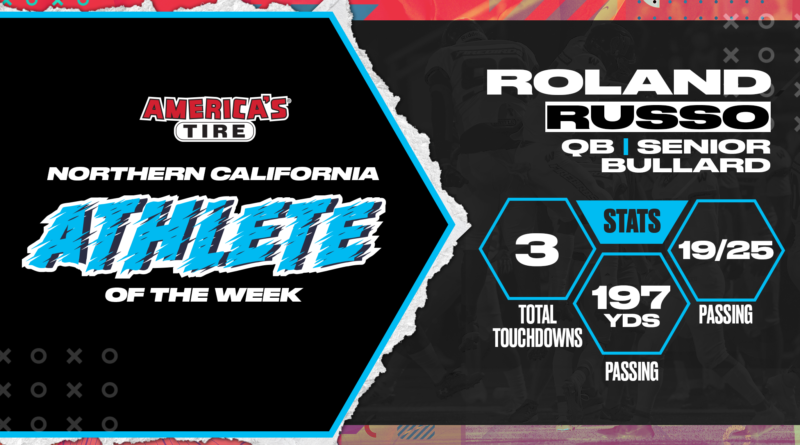 The senior helped lead the Knights over Bakersfield 45-21 by completing 19 of 25 passes for 197 yards and a touchdown, rushing for a TD, and catching for a TD on a trick play.

Russo received 53.38% of the vote, beating out Escalon S Tyler Medina who finished second with 39.06%. Central Valley Christian QB Max Bakker finished third with 6.31% and Stagg’s Jameelah Pharms finished fourth with 0.65%. There were over 37,000 votes tallied this week!

We are currently accepting America’s Tire Northern California Athlete of the Week nominations. If you would like to nominate an athlete, please email athleteoftheweek@scorebooklive.com or message us on Twitter or Instagram at @sbliveca.

Christian Aguilar, Pittsburg QB: Making his first ever start for the injured Jaden Rashada, Aguilar completed 21 of 26 passes for 266 yards and three touchdowns to lead the Pirates over Clayton Valley Charter 28-14.

Dante Antonini, St. Vincent de Paul ATH: Antonini led the Mustangs to a 54-32 victory against St. Helena by running for 99 yards and a touchdown on just seven carries, catching for 54 yards and a touchdown, both catching and rushing for one two-point conversion, and recording seven tackles (one for loss), an interception, and a forced fumble.

Jamai East, Vanden WR/DB: East dominated with three touchdown catches from Tre Dimes, a pick-six, and another interception in a 49-21 victory over Merced.

Kemauri Glenn, Wilcox RB: Glenn led the Chargers over Menlo School 54-20 by rushing just 11 times for 209 yards and four touchdowns, and also catching for 20 yards and a touchdown.

Aiden “Ponyboy” Taylor, Central Catholic RB/LB: Taylor ran for 98 yards, three touchdowns, and a pair of two-point conversions, and led the Raiders with 74 receiving yards and eight tackles in a 43-22 win versus Monterey Trail. Julian Lopez also ran for 148 yards and two TDs for Central Catholic.

Blake Nichelson, Manteca RB: Nichelson ran for 210 yards and two touchdowns, and caught for 24 yards to lead the Buffaloes to a 35-28 upset of Oakdale.

Isacc Davison, LeGrand RB/DB: Davison recorded an interception, 11 tackles (one for loss), and 84 rushing yards in a 35-12 win against Woodland Christian.

Beau Davis, Argonaut QB/LB: Davis ran for 70 yards and two touchdowns, threw for 112 yards and a touchdown, and led the Mustangs with 14 tackles to defeat Rosemont 31-20.

Christian Harris, Salesian FB/LB: Harris ran for 69 yards and a touchdown, and recorded a pick in a 28-26 win against Justin-Siena.

Chase Vehmeyer, Windsor QB: Vehmeyer threw for 161 yards and a touchdown and rushed for 107 yards and another TD as Windsor defeated Benicia 38-14. Nick Fa’agata added a touchdown catch and a pick-six for the Jaguars.