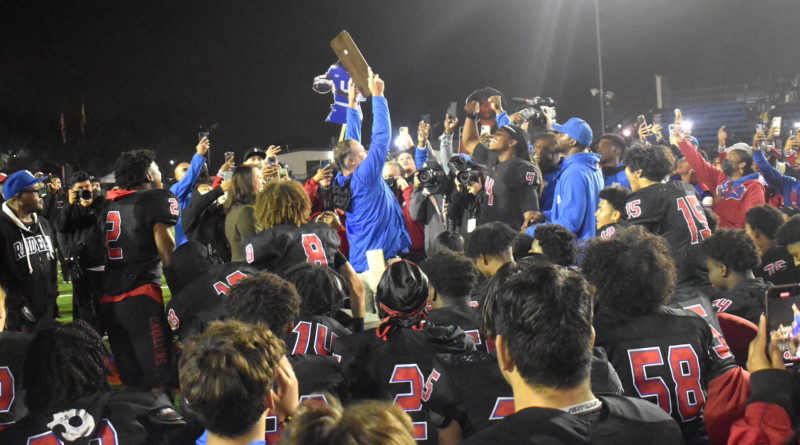 GARDENA– Serra defeated Long Beach Poly for the second time this season – in the non-league rivals’ third meeting of the 2021 calendar year – to win a CIF 1-A Southern Region championship.

Serra, which defeated Apple Valley 31-3 last week in the CIFSS Division 3 finals, will advance to the 1-A state title game next week against Liberty (Bakersfield). Here are three takeaways from the game:

IT COMES DOWN TO FOURTH QUARTER HEROICS

Every time these two southern L.A. County powerhouses go at it, strong defense is played and it comes down to the wire. It was the case in their spring debuts, when Poly won 27-21 in overtime on a Devin Samples touchdown run. It was the case when Serra avenged that loss to win a 28-27 nail-biter on Aug. 27 against the eventual CIFSS Division 4 champion. And it certainly was true Saturday night as well.

Serra opened the scoring with 9:34 left in the second quarter on a touchdown pass from Maalik Murphy to WR/RB Troy Crozier. Two minutes later, the Jackrabbits tied the game at seven on a touchdown strike from Shea Kuykendall to WR Jason Robinson Jr. 7-7 was the score until Murphy found RB Cincere Rhaney for a 37-yard touchdown with 8:31 left in the third quarter. The play had been set up by another long reception from Rhaney, who had bounced right back up after taking the hardest hit of the night at the end of the first catch. A Poly field goal with a little under four minutes to play in the third quarter cut Serra’s lead to 14-10.

For a while after that, it looked like 14-10 might be the final score. Poly forced a three-and-out after its ensuing kickoff and marched deep into Cavaliers territory, but Serra DB Dakoda Fields recorded an interception just outside the end zone with 11:10 left in the fourth quarter. The Jackrabbits forced a punt, the Cavs forced a turnover on downs, the Jackrabbits forced another punt, and then Kuykendall capped off a Poly nice drive with a touchdown pass to WR Titus Bordeaux. That gave the Jackrabbits their only lead of the night, 17-14, with 3:25 left in the game.

But Serra only needed 20 seconds to get the lead back on a score that Murphy read before the play even started. He dropped back in the pocket to let Crozier dart out past the opposing secondary, and lofted the pass up some 20 yards under pressure that Crozier caught and took 75 total yards to the house. A good PAT made the score 21-17.

Poly wasn’t done though, as DB Timmy Tuiagamoa returned the kickoff to Serra’s 32, and the Jackrabbits had nearly three minutes to work with. But as Serra’ defense held, Kuykendall was forced into a Hail Mary that was brought down by Cavaliers DB Tre’ Harrison. Harrison, a freshman, delivered an emphatic fourth quarter interception for the second straight game, as his pick last week against Apple Valley was the icing on the cake. Serra only needed to kneel the clock out to put the Jackrabbits’ championship season to bed.

Most of this game was a two-sided defensive clinic.

Long Beach Poly’s pass-rush gave Serra more problems than a lot of the Cavs’ previous foes. And other than Murphy’s two long completions to Rhaney and the one to Crozier, the Jackrabbits’ energetic defense executed without any miscues. Their secondary held tight on every single Serra go route, and Poly defended the run well without exception. CB Kylen Allen picked Murphy off early in the first quarter.

But the Cavaliers’ defense didn’t have any substantial blunders to point to. Kuykendall threw a lot of incomplete passes that were catchable and hit the receiver in the hands, but were still very well-guarded. The strong coverage in the secondary allowed Serra’s front seven to focus on keeping Samples in check. He ran for 92 yards and no touchdowns on 21 carries. Serra’s defense was even better in the red zone than in the rest of the field, and ended three Poly drives into the red zone with zero points.

“I [said] early on that our defense, they’re the ones that are going to win us this title,” said Cavs head coach Scott Altenberg after the game. “Now we’ve got two, and I think a lot of it’s the defense. We played okay on offense, but we gave away a lot. Defensively is what kept us in it.”

“The thing about our guys is that they just won’t stop. They play with such a high motor… They don’t have a five-star [player], they just have a lot of guys who get after it, and it’s really exciting.”

Despite the strong Jackrabbits defense, Murphy was able to complete 13 of 24 passes for 217 yards.

“I didn’t say anything beforehand because I didn’t want to jinx it, but it’s my 200th win,” said Altenberg after the game.

“That’s an exciting thing, and it’s [largely] because of this place. It’s this place, this team right here… I couldn’t be more excited.”