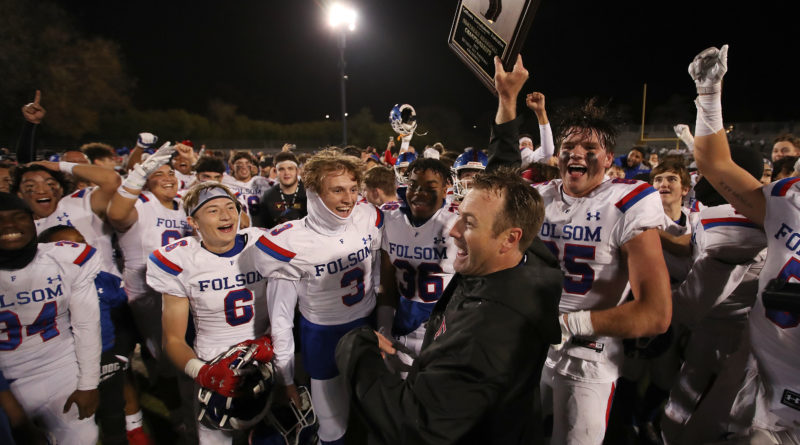 Overcoming an early 14-0 deficit, the Bulldogs scored 21 unanswered points and held on for a thrilling 28-27 victory over the Spartans on Friday night in the CIF NorCal 1-AA Regional championship game.

Folsom had lost its previous five meetings against De La Salle dating to the 2012 season.

The Bulldogs (11-3) will face Cathedral Catholic-San Diego in the 1-AA state championship game on Dec. 10 at Saddleback College. It will be Folsom’s fifth appearance in a state championship bowl game since 2010 – having won the previous four times.

Folsom senior quarterback Tyler Tremain accounted for four touchdowns, including a 3-yard run with 2:12 left in the fourth quarter, that gave the Bulldogs a 28-21 lead following the successful conversion kick.

But the Spartans responded quickly and pulled within 28-27 when quarterback Luke Dermon connected with receiver Ezekiel Berry for a 42-yard touchdown with 1:44 remaining. De La Salle went for the lead and was stopped short on a 2-point conversion attempt.

De La Salle had taken an early 14-0 lead in the first quarter following a 14-yard touchdown run by Charles Greer, which was set up by a successful on-side kick.

Folsom rallied behind Tremain who threw a 11-yard touchdown to receiver Austin McMillan to cut the deficit to 14-7 with 1:12 left in the opening quarter. Tremain followed with touchdown runs of 10 yards in the second quarter, and 15 yards in the third quarter that gave the Bulldogs their first lead of the game.

During one long stretch from the first quarter until the fourth quarter, De La Salle (10-3) was held scoreless on seven consecutive possessions before cornerback Ronald Pierce picked up a fumble and returned it 63 yards for a touchdown to tie the game at 21 with 8:45 remaining.

(All photos by Dennis Lee)