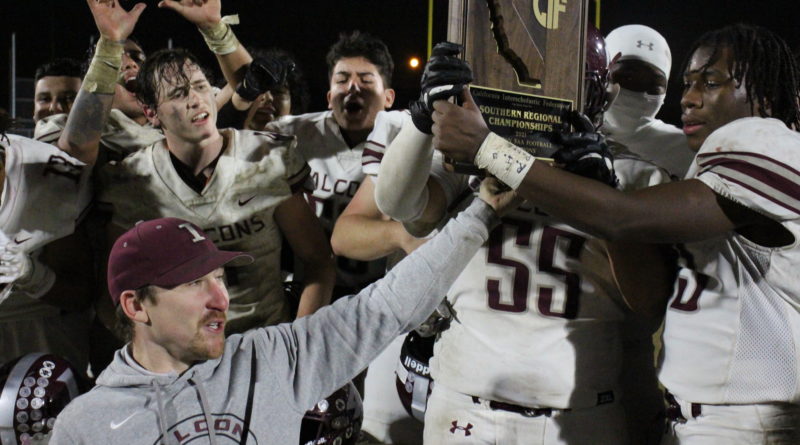 LOS ANGELES, Calif. — Football can be a cruel game.

A week after winning his first Section title in two decades, Venice head coach Angelo Gasca had to deal with heartbreak on Friday night as his Gondoliers team lost a last second thriller to Independence Bakersfield 19-14 in the Division 5-AA CIF State Southern Regional Bowl Game.

With 3:06 to play, Venice had the ball at their own three yard-line needing a touchdown to win. Gondoliers quarterback Paul Kessler marched Venice down the field despite not having any timeouts left and as the final seconds of the game ran out, he took a snap from the Independence seven yard-line and threw a pass over the middle and into the end zone. The ball hit Independence’s D’amonte Moten between the numbers and he made the catch after he’d jumped Rashawn Jackson’s route. The interception ended the game giving the Falcons a walk-off win and state championship berth.

“I’m very frustrated,” Gasca said postgame. “A lot of stuff happened out here that shouldn’t have happened. We gotta live with it…[I called] a slant, a wheel and an out [on the last play]. Paul threw it a little late, but we had to go to our best guy. Paul made some great plays on that last drive. We didn’t have any timeouts.”

Independence led 19-7 in the third quarter thanks to three rushing touchdowns from quarterback Ladon Denmark. Venice cut the deficit to 19-14 with 2:26 to play in the third quarter on a 57-yard pass from Kessler to Jamier Flowers, but the Gondoliers wouldn’t score again.

Below are three observation’s from Friday’s classic.

SCHILHABEL’S TRUST IN HIS DEFENSE PAYS OFF

Independence head coach Tyler Schilhabel elected to not use any timeouts on Venice’s final drive, even though the Gondoliers were moving the ball down the field and eventually got into the red zone. Venice didn’t have any timeouts, but on a couple of occasions Independence’s defense could potentially have used a breather or some time to regroup.

Even though it ended with a close call, Schilhabel trusting his defense ultimately proved to be the winning formula as speeding up Venice led to the last second interception.

“We had that confidence in our defense to either get a stop when we need to or get the turnover,” Schilhabel said. “Obviously we knew that was time for them to gut up and make a play. We didn’t call any timeouts because we felt confident that they were going to get it done, they were playing great all game. We trusted them to win us the game.”

WHY DIDN’T VENICE HAVE ANY TIMEOUTS?

The Gondoliers used a timeout early in the third quarter to figure out a substitution and then on their final drive, Gasca called the team’s last timeout after one of his offensive lineman had his helmet come off and on the next play the backup who came in to replace him was wearing No. 42, an ineligible number for a lineman, and Venice was whistled for a five-yard penalty. The call incensed Gasca and he used a timeout to get an explanation from the head official.

MOTEN IS PLAYER OF THE GAME

Even though Denmark rushed for the three scores, Moten intercepting the final pass was the play of the game, but that wasn’t his only significant contribution on the night. Earlier in the quarter he intercepted Kessler as well, which allowed Independence to run more of the clock down and force Venice to start their final drive from their own three yard-line after a punt. The two picks won the Falcons the game.

“The job’s not finished,” Moten said after the game.

Independence will play for the school’s first ever football state title next week on the road against San Marin.