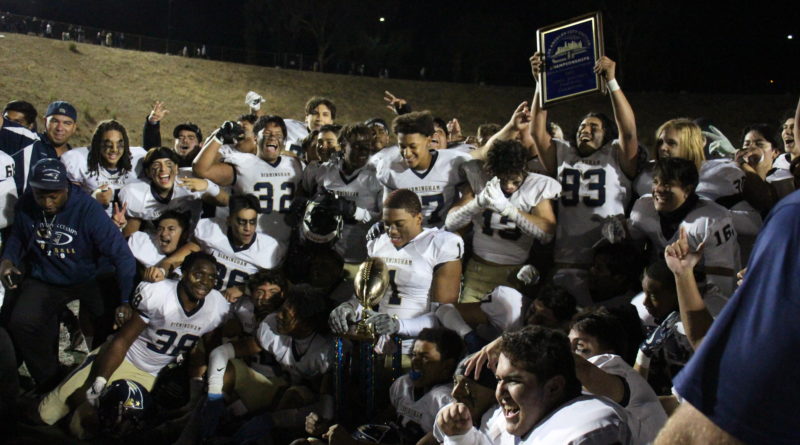 Here’s a complete preview of the Division 3–A Southern Region championship and state semifinal, a matchup of two section champions playing their best football at the right time of the season, Patrick Henry and Birmingham.

Patrick Henry dropped two of their first four games this season before embarking on their current eight-game winning streak. The Patriots offense has been dominant, scoring 42 points or more in seven of their past eight games, surpassing 64 points in three of those games. Patrick Henry’s run-first approach saw them go for over 400 yards on the ground in their Division 4 Championship win over University City.

Birmingham took their lumps early in the season, scheduling five straight Southern Section opponents and lost all five before taking on West Valley teams in the Los Angeles City Section. The strong schedule paid off for the Patriots in the second half of the schedule, leading to only 13 total points being allowed over their four league games. They then shutout Lincoln and Banning in the first two rounds of the playoffs before taking down San Pedro 24-14 in the City Section Open Division Championship.

Patrick Henry has relied heavily on senior running back Elijaih Lux this season. He’s coming off of a 350-yard, four-touchdown performance in the section championship and is closing in on 2,000 yards for the season while averaging just under 11 yards per carry. Junior Malachai Ghitman has been efficient at quarterback, tossing 24 touchdowns to only four interceptions. Nine different players have caught touchdowns for the Patriots led by Jeremiah Symington and Jonny Nelson, who have six each. Senior linebacker Jayden Davis has been heating up for Patrick Henry, collecting four sacks in each of his last two games.

Birmingham’s balanced offense is led by senior David Jordan-Oliveros at quarterback. He’s thrown 16 touchdown passes to seven interceptions and has scored twice on the ground. Birmingham’s best player, Arlis Boardingham, is a matchup nightmare at six-foot-five and can make plays all over the field. He’s caught 13 touchdowns, rushed for three touchdowns, and has 56 tackles and two sacks on defense. Timothy Jackson has been a playmaker in the back half of Birmingham’s defense, collecting 53 tackles and seven interceptions.

Patrick Henry and Birmingham both enter the game playing their best football in the second half of the season and have made big strides offensively. Patrick Henry’s Elijaih Lux makes one big run to deliver the home team the victory.