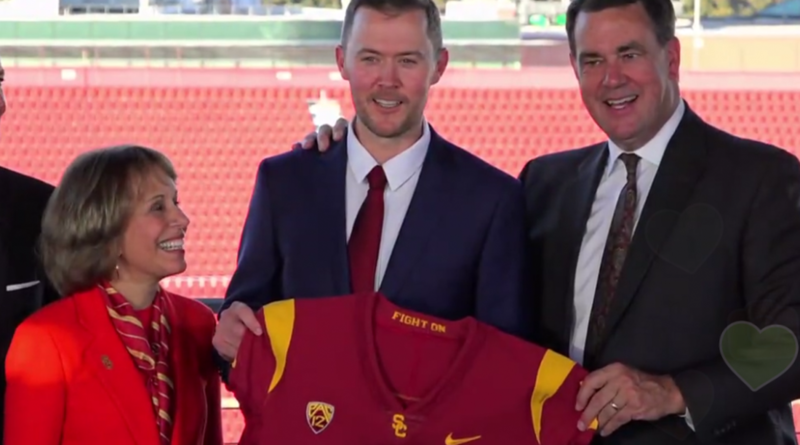 The recruiting pitch writes itself.

As long as Riley is in charge, the days of elite Southern California high school football players leaving the state for better opportunities elsewhere, especially at the quarterback position, are likely over.

Mater Dei (Santa Ana, Calif.) quarterback Bryce Young, a longtime USC pledge, signed with Alabama that day. Young was a consensus top five player in the country and even though he grew up in Pasadena and had been recruited by USC for years, the Trojans football program had fallen too far off to lockdown the current Heisman Trophy favorite.

“I had a great relationship with the USC coaches and I still do,” Young said in October of 2019 after flipping from USC to Alabama. “I have a tremendous amount of love and respect for them. It wasn’t an easy decision. It wasn’t something that happened quickly. It was a long process that took a lot of heart and prayer. I’ll always have love for USC.”

As if missing out on Young wasn’t bad enough, USC didn’t have a backup plan at the QB spot and ended up not signing one from the high school ranks that year, even though California’s crop of 2020 quarterbacks was exceptionally talented. St. John Bosco (Bellflower, Calif.) quarterback D.J. Uiagalelei signed with Clemson and Rancho Cucamonga (Calif.) signal caller CJ Stroud signed with Ohio State that year. Both Uiagalelei and Stroud are now full-time starters at their respective schools. 247Sports.com ranked the 2020 USC recruiting class dead last in the Pac-12. On all fronts, it was a nightmare.

In his introductory press conference on Monday, Riley told reporters that his staff “plans on building the best roster in the country” and that he understands that “a lot of the best [players] are right here [in California].”

“What a tremendous advantage for us,” he went on to say.

In recent years, California having some of the best high school football players in the country ended up being an advantage for schools outside of the Golden State. All of a sudden, Alabama and Clemson were snagging prospects that 10 or 20 years ago they wouldn’t have even considered recruiting. That’s how bad it had gotten at USC.

With Riley, USC now has a coach that’s a draw. And a massive one at that.

2023 Los Alamitos (Calif.) quarterback Malachi Nelson, one of the top QB’s in his class who had been committed to Oklahoma up until Riley left, told 247Sports.com recruiting analyst Greg Biggins on Sunday: “End of the day, I committed to Lincoln Riley. Don’t get me wrong, I loved Oklahoma but coach Riley is why I committed there.”

With all due respect to former USC head coach Clay Helton, were any recruits saying that about him?

“I just look at it like ‘how can we not do it?'” Riley said at Monday’s press conference. “How is it not going to work?”