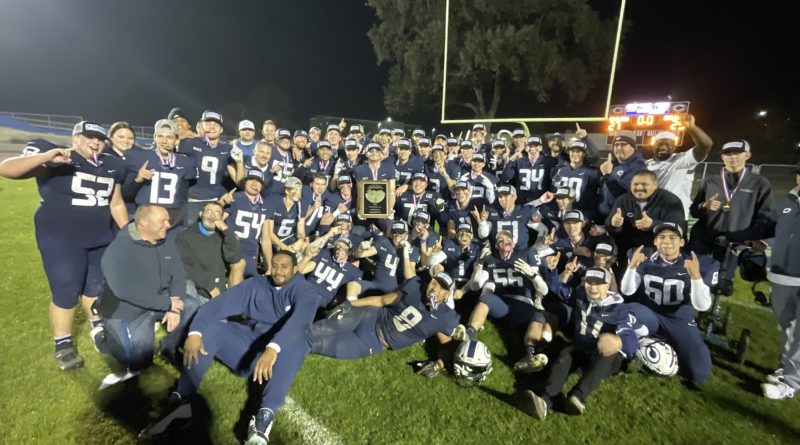 VISALIA, Calif. – Sophomore kicker Trent Koetsier, who was called up to the varsity roster at the beginning of the playoffs, kicked a game-winning 27-yard field goal as time expired to give Central Valley Christian a 27-25 victory over Bakersfield Christian in the Central Section Division III championship game Friday night.

“It’s awesome,” Koetsier said. “It’s crazy, I never thought I’d be kicking the game winner, but I did so it’s awesome.”

CVC took an early lead, taking the opening kickoff and moving down the field for a field goal. On the first play of the next drive, Bakersfield Christian struck on a 65-yard touchdown pass from Braden Waterman. Bakersfield Christian took a 7-3 lead into the second quarter before CVC’s Max Bakker threw a couple of touchdown passes, giving CVC an 18-10 lead at halftime. After another touchdown pass from Bakker in the third quarter, CVC took a 24-10 lead into the final quarter.

Braden Waterman connected on an 8-yard TD pass to Bryson Waterman to get Bakersfield Christian to within seven points at 24-17. After holding CVC and getting the ball back, Braden and Bryson connected on their second TD pass of the fourth quarter, this time from 14 yards out. On the ensuing two-point conversion, the Eagles ran a double reverse pass that worked to perfection to give Bakersfield Christian a 25-24 lead with 53 seconds left.

But CVC still had enough time to mount the game-winning drive, which culminated in Koetsier’s kick.

“Our kids believed and they trust him,” Hughes said of Koetsier. “He was on our JV team and just got called up for the playoffs, and hit two field goals including the game winner so I don’t know if it gets any better than that.”

The Cavaliers, now 10-4 on the season, move on to the CIF State playoffs. The brackets for CIF State will be announced Sunday afternoon.