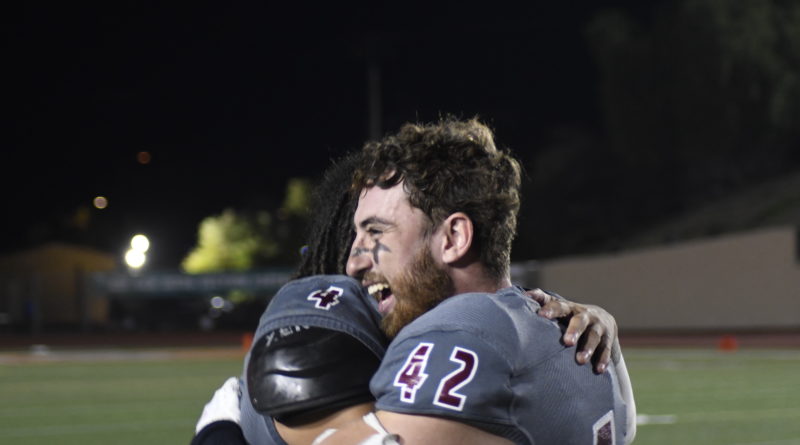 ESCONDIDO, Calif. — Despite only losing one game during the regular season, Scripps Ranch head coach Marlon Gardinera saw weaknesses in his defense for much of the season.

“We lost our captain in week three and our defense struggled for weeks and weeks,” Gardinera said earlier this week. “He’s back and it changes the prospective on the game and how many points you’ve gotta try and put up and what you’ve gotta do.”

The return of the defender that Gardinera spoke of, senior linebacker Dylan Stoney, paid dividends on Friday as the second-seeded Falcons shutout fourth-seeded La Jolla 42-0 in the San Diego Section Division 2 Championship game.

Below are three observations from Scripps Ranch’s win on Friday.

Scripps Ranch and La Jolla have now faced off five times since 2018, most recently in a week two battle that resulted in a Scripps Ranch one-point win and 103 total points being scored. The same could not be said on Friday as the Scripps Ranch defense attacked from the start, allowing La Jolla only one first down during the first half.

“They asked me the keys to the game, and I said defense,” Scripps Ranch head coach Marlon Gardinera said. “The quarterbacks are gonna do what they do, all three of them, including their backup. Whoever plays defense is gonna win the championship and that’s exactly what happened.”

Stratton, a Washington commit, missed the majority of the regular season with an injury and re-aggravated the injury in the Vikings’ first playoff game causing him to miss last week’s semifinal win over Mira Mesa. He threw only two passes in the second half before exiting in visible pain.

While the Vikings managed 108 passing yards between Stratton and backup Kevin Steel, they were held to zero rushing yards by a swarming Scripps Ranch defense.

“I’m so proud of our defense, first skunk of the season,” Scripps Ranch quarterback Jax Leatherwood said. “First time not allowing them to score a single point, it just feels great.”

Although the rosters look much different than they did in 2019, Friday’s game allowed Scripps Ranch a shot at redemption after La Jolla upset the Falcons, 17-10, in the 2019 Division 3 Championship game.

“This feels great,” senior running back Jalen Shaw said. “We really wanted to see them and get our redemption, it means a lot to everybody on this team and the teams before us.”

The Falcons entered the 2019 game a perfect 12-0 and had their eyes set on a possible state playoff run until the Vikings shut them out during the second half to seal the victory. Now they’ll get that opportunity next week.

“This is not the end of the rivalry, I’m still here another year,” Scripps Ranch junior quarterback Jax Leatherwood said. “This feels great, another one would feel even better.”

Leatherwood continued his excellent debut season for the Falcons by tossing two more touchdown passes in the championship game, giving him 43 on the season against only two interceptions.

Scripps Ranch senior running back Jalen Shaw ripped off a 25-yard gain on the first play of the game and didn’t stop there. He scored three first half touchdowns, from one, two, and four yards out and finished the game with 170 rushing yards.

“They had a light box because last time we played them it was a passing game,” Shaw said. “I just took every opportunity that I got and I went to work.”

In their week two matchup, Jax Leatherwood sliced up the La Jolla defense finishing with 363 passing yards and four touchdowns. On Friday the Vikings were determined not to let that happen again.

“They were scared that we were gonna throw it so they dropped guys into coverage and left the box empty,” Leatherwood said when asked what worked so well offensively.

Scripps Ranch turned the ball over on downs in the red zone on the opening drive of the game before responding with four straight touchdown drives to close out the first half.

“They left the box open,” Marlon Gardinera said. “They were determined not to let our quarterback beat them and they forgot about Jalen Shaw, if you forget about Jalen, you’re gonna pay the price.”