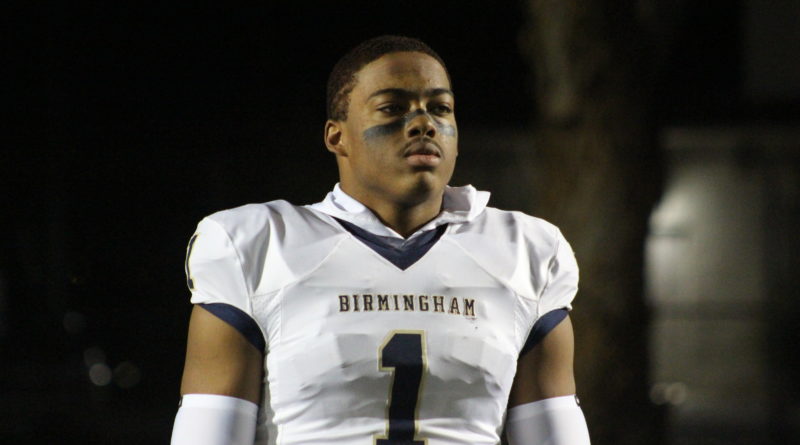 WOODLAND HILLS, Calif. — Jim Rose has had no problem getting his Birmingham team to buy in over the last three seasons.

“When you get rings the kids play a lot better,” he said after leading Birmingham to its second straight Open Division City title on Saturday night at Pierce College.

The Patriots led 14-0 over San Pedro at halftime and won 24-14. Below are three observations.

After both teams punted on their opening drives, Birmingham senior Delamonte Barnes broke off a 34-yard run before senior QB David Jordan-Oliveros hit sophomore Peyton Waters for a 25-yard touchdown on the Patriots’ second series.

Birmingham then forced a San Pedro punt before scoring again.

On the Patriots’ third drive, Jordan-Oliveros connected with junior Ace Acosta for a 34-yard pass play and then star senior Arlis Boardingham caught a pass on 4th-down and six, steamrolled over a tackler and scored a 41-yard touchdown.

Birmingham then stopped San Pedro a yard short on a 4th-down and 13 from their own 14-yard line late in the second quarter to go into halftime up 14-0.

In the second half, Waters stripped San Pedro receiver Kejuan Bullard after he had caught a pass and recovered the ball at the San Pedro 45-yard line. That play set up Boardingham’s second touchdown of the night on a jump ball throw from Jordan-Oliveros that Boardhingham somehow brought down in the far right corner of the end zone over a Pirates defensive back. The touchdown put Birmingham ahead 21-0 and even though San Pedro scored a touchdown on the last play of the third quarter and then a second in the fourth, the 21-0 lead was enough of a cushion to earn the victory.

“This feels super great,” Boardingham said after the Patriots took their final kneel down (more on that later). “I know our team could get it done. The o-line and the d-line and the coaching staff had a great game plan. It’s a spectacular moment.”

CONTROVERSY AT THE END

Leading 24-14 in the final seconds of the fourth quarter, Jordan-Oliveros took the last snap of the game but before he could kneel down, a San Pedro player jammed into his leg, which kept the quarterback down on the turf for several minutes while his teammates celebrated. The two teams almost got into a shoving match at midfield after the play, but cooler heads prevailed and the two squads were separated.

The near-scuffle caused the postgame trophy presentation to be canceled. Birmingham was given its trophy in the end zone away from San Pedro, instead of at midfield. Traditionally, the two championship teams come together at the 50-yard line after the game.

Rose took issue with how the final snap of the game unfolded.

“The game is over,” he said. “Let us take a knee and get out instead of almost getting our quarterback hurt. That was terrible.”

BIRMINGHAM HAS STATE TITLE ON ITS MIND

The Patriots started the season 0-5, but now have a chance at playing for a state title if they can win next week’s state bowl game. Rose scheduled five Southern Section opponents for Birmingham’s first five games of the year and even though the Patriots didn’t win one, playing that level of competition contributed to winning Saturday’s Section title, according to Rose.

“If your kids can learn from it and get better than its worth it,” he said.

In 2019, Birmingham beat Banning 27-20 in the Open Division title game, but then lost 51-23 in their state bowl game to Pacifica Oxnard so the Patriots didn’t qualify for the state championship.

“The 2019 team, the pinnacle was the City title since we hadn’t won one in so long,” Rose said. “Our seniors that played on that team have looked forward to going back and trying to win state.”

And they’ll now get that chance.

“That’s something we need to do and something I’m looking forward to,” Boardingham said when asked about the Patriots’ state title push.

State bowl game pairings will come out on Sunday.