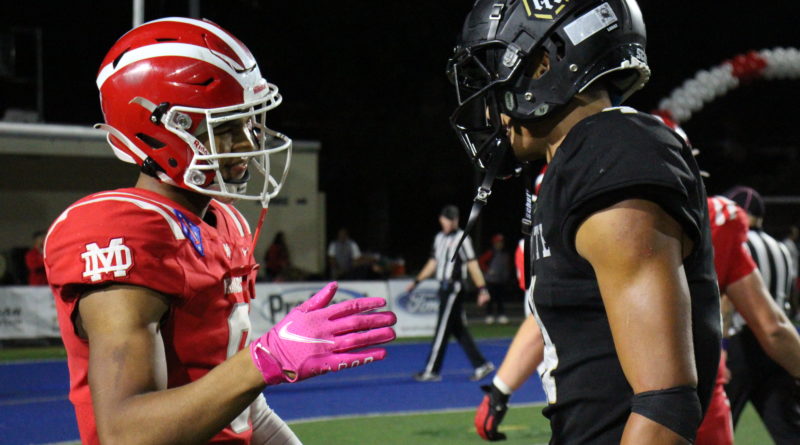 Mater Dei and Servite, the No. 1 and No. 8 teams in SBLive’s latest Power 25 national high school football rankings, face off in the Division 1 Southern Section championship game on Friday night in Long Beach, Calif.

Here are the five biggest storylines heading into the game:

WHAT WILL THE FALLOUT BE FROM THE OC REGISTER STORY ON HAZING?

According to a detailed report from the OC Register released Tuesday, a February locker room fight at Mater Dei High School between two football players that started as “Bodies” led Santa Ana PD to recommend that the District Attorney’s Office file felony battery charges against one of the players.

According to the story, Bodies are “an initiation or hazing ritual where players punch each other in the torso between the hips and shoulders until one of them surrenders.” In this case, the fight reportedly went too far, with one player getting punched several times in the face.

The two players are identified in the story as Player 1 and Player 2.

The District Attorney’s Office “does not intend to file charges in the case and views the altercation as mutual combat,” according to the OC Register

According to the OC Register, “Player 1’s family filed a lawsuit against Mater Dei High School and the Roman Catholic Diocese of Orange in Orange County Superior Court on Tuesday, Nov. 23. The suit alleges negligence, negligence per se-hazing in violation of the California penal code, negligent failure to warn, train or educate, intentional infliction of emotional distress.”

Player 2 is on Mater Dei’s 2021 team, according to the OC Register. It is unclear how the story will impact the game, but it is clearly the biggest storyline to monitor over the next few days.

WHAT DEFENSIVE ADJUSTMENTS WILL SERVITE MAKE?

The last time these two teams played in the regular season, Mater Dei won 46-37. Servite only forced Mater Dei to punt twice as Monarchs quarterback Elijah Brown completed 17 of 23 passes for 247 yards and a touchdown and Quincy Craig rushed for four touchdowns. Raleek Brown scored a touchdown of his own and finished the night with over 100 yards on the ground. Mater Dei put on an offensive clinic.

Friars head coach Troy Thomas works with Servite’s defense and couldn’t have been happy with how that side of the ball played back in October. What will he dial up differently this time around?

There is precedent for Servite coming out with a completely different game plan against a talented opponent in a rematch — just look at what happened last week (more on that below).

WHICH SERVITE OFFENSE WILL WE SEE?

To get to this week’s championship against Mater Dei, Servite needed to beat St. John Bosco in the semifinals, a team they had lost to 24-10 in the regular season. After having quarterback Noah Fifita throw 24 times in the first game, Servite offensive coordinator Sean Koelle dialed up only ten passes for Fifita in the rematch compared to a whopping 21 carries. The plan worked as Fifita rushed for 136 yards and three touchdowns in a 40-21 win.

So what does that mean for this week? With it all on film and against an opponent that’s better against the run, Servite can’t possibly call that many quarterback keepers again. When Servite first played Mater Dei this season, Fifita connected with star receiver Tetairoa McMillan 15 times for 167 yards and two touchdowns. Don’t expect McMillan to be a decoy on Friday like he was last week.

Servite’s offense played very well in the 46-37 October loss to Mater Dei, so there will most likely be some continuity from the game plan that night to the one on Friday. But it’s important to keep in mind that Koelle will certainly have a few tricks/surprises up his sleeve, like he did a week ago. Executing those surprises may end up being the difference in the game.

CAN ELIJAH BROWN GET BACK TO BEING CALM, COOL AND COLLECTED?

In last week’s 21-16 semifinal win over Corona Centennial and for the first time in his career, Brown finished the game with more interceptions than touchdowns (he had one pick and zero TD’s). Centennial managed to make Brown uncomfortable, which no team had done consistently in any of Brown’s previous 14 games as a starter. In the third quarter with a 14-9 lead, Brown scrambled left and attempted a shovel pass that was picked off by Huskies linebacker Jessee Schumacher. It was an uncharacteristic play from the usually calm, cool and collected signal caller.

Brown seemed a little sped up at times last week. The Huskies secondary is one of the best in the nation and the usual windows Brown has had to complete throws this season weren’t there. Corona Centennial also brought decent pressure throughout the night, but it seemed like the Huskies defensive backs bothered Mater Dei’s sophomore QB more so than the pressure, which he’d seen before in Trinity League games.

Brown completed 17 of 23 passes the last time Mater Dei played Servite and didn’t turn the ball over. For the most part, he was comfortable all night. If that continues on Friday, expect Mater Dei to win again. If Servite manages to make him uncomfortable, the Friars can certainly pull off the upset.

WHO WILL MAKE A GAME-WINNING PLAY?

Outside of the obvious of Fifita or McMillan for Servite and Elijah Brown, Raleek Brown and receiver CJ Williams for Mater Dei, who is the player we’ll be talking about years from now after Friday’s game?

Against Corona Centennial last week, Mater Dei linebacker David Bailey had a key strip sack which led to the Monarchs game-winning touchdown. Mason Graham made a similar play for Servite against St. John Bosco last week as well. Those two are prime candidates to make a game-winning play again.

When two teams this talented meet up, it could come down to a number of players though, which is why this championship rivalry showdown should be special.

Is it Friday yet?