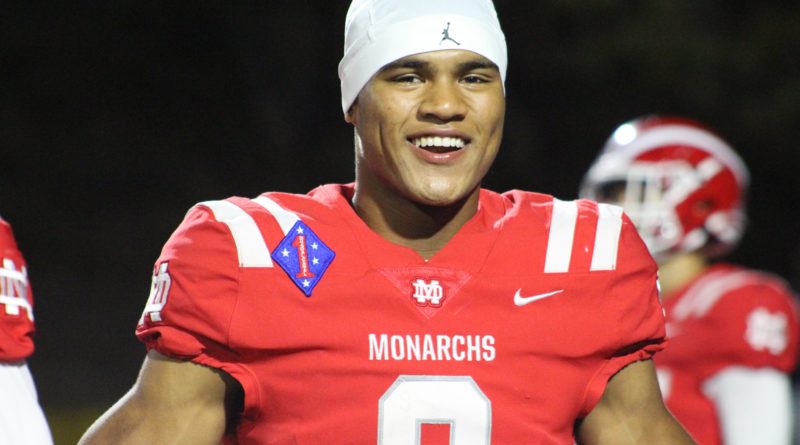 In a Top 10 national showdown scheduled for Friday night, No. 1 Mater Dei and No. 8 Servite will meet for the second time this season – and this time the Southern Section Division 1 championship is on the line.

Here’s a breakdown of all the college prospects who will be featured in Friday’s game. This includes all prospects who are nationally-ranked and/or have received D-I offers (per 247Sports). Both teams have many more players who will prove to be D-I prospects in the future, including numerous current impact players who aren’t listed in this post.

CB Domani Jackson: The longtime consensus 5-star prospect is out for the season with an injury, and he decommitted from USC on Nov. 14. He has some 40 offers of which Alabama is considered the favorite to land him.

RB Raleek Brown: A 5-star Oklahoma commit, Brown had over 3,000 rushing yards and nearly 1,500 receiving yards in his career before even starting his senior season. In just nine games this season, he’s run for 900 yards and 11 touchdowns, and caught for 179 yards this season. Brown California’s most highly-touted RB of the past few years, and is backing it up as a centerpiece of the top-ranked team in the country.

DE/LB David Bailey: Bailey is a high 4-star prospect with 13 offers (all Power-5), and can line up equally well at DE and LB. His 44 tackles, 17 tackles for loss, 13 sacks, four QB-hurries, and three forced fumbles are all team-highs.

WR CJ Williams: Williams, a high 4-star WR, committed to Notre Dame out of at least 49 offers. He leads the Monarchs with 43 catches for 721 yards and 11 touchdowns.

RB/DB Quincy Craig: A 3-star prospect with at least three D-1 offers, Craig has run for 85 yards and eight touchdowns, caught for 282 yards and three touchdowns, and totaled 14 tackles and three pass break-ups on defense.

CB Cameron Sidney: Sidney is a 3-star Cal commit with 34 tackles and a team-high 12 PBUs.

S Josh Hunter: Hunter, a 3-star San Diego State commit, is the reigning Trinity League Defensive Player of the Year. He’s second on the Monarchs with 43 tackles and has 2.5 tackles for loss, two interceptions, and three passes defensed.

DL Jacob Kongaika: Kongaika is a 3-star prospect with at least three D-1 offers, including UCLA. He’s third on the team with eight tackles for loss in just eight games.

K Chase Meyer: Meyer, one of the top kickers in the state, has numerous D-1 offers including USC. He averages over 64 yards per kickoff, and has made a whopping 111 straight PATs.

DL Sione Moa: Moa, a 3-star prospect, had 11 tackles last season in a win against Servite.

LB Leviticus Su’a: A 4-star recruit with a dozen offers, Su’a has 28 tackles, 4.5 tackles for loss, and four pass break-ups this season.

OG BJ Tolo: Tolo, a 3-star guard with multiple Power-5 offers, has been a factor at OL for the Monarchs since he was a freshman..

DE Ezra Funa: The 3-star EDGE prospect has made eight tackles, three TFLs, and a sack in four games.

WR Jack Ressler: Ressler has four catches for 266 yards and three touchdowns this season. He also has 11 offers, numerous of which are Power-5.

QB Elijah Brown: A 4-star prospect with five Power-5 offers, Brown has started since the first game of his high school career. In five games as a freshman, he threw for 973 yards and 15 touchdowns to just one pick on 69.2% completion. This season, he’s thrown for 2,228 yards and 27 touchdowns on 74.1% completion, good for a massive passer rating of 144.5, and run for a pair of TDs.

CB Zabien Brown: Brown has eight offers including Georgia and Alabama. He’s made 21 tackles and leads the Monarchs with three interceptions.

RB Jordon Davison: Davison already has 11 offers and has run for 188 yards and four touchdowns as a freshman.

WR Tetairoa McMillan: McMillan, a high 4-star Oregon commit, has caught for 1,235 yards and 17 touchdowns this season. He’s also emerged as one of the top safeties in SoCal, and has seven interceptions to his name.

TE Keyan Burnett: A 4-star Arizona commit at TE who can also play wideout, Burnett has caught for 574 yards and six touchdowns.

DT/OL Mason Graham: Graham is a 4-star Michigan commit and DL, and also one of the better O-linemen in the state. He’s recorded 61 tackles, 21 TFLs, 14 sacks, and two fumbles.

LB Jacob Manu: Yet another Arizona commit in the Friars’ senior class, the 3-star LB leads the team with 85 tackles, six of which came for loss.

LB/DL Maxx Silao: Silao haș missed all of 2021 with a back injury, but remains a versatile 3-star LB and Servite team captain.

DB Michael Hurst: Hurst, a 3-star S prospect who plays a lot of CB1 for the Friars, recently picked up his first D-1 offer from Portland State. He’s recorded 44 tackles and an interception this season.

WR Mikey Welsh: Welsh has caught for 513 yards and four touchdowns this season, and recently got his first offer from Drake.

OL Josiah Laban: Laban marks yet another Friar who picked up his first D-1 offer this month, coming from Morgan State.

LB Aden “Ace” Eckenwiler: Eckenwiler has 60 tackles and two interceptions this season, and is a 2-star prospect.

RB Houston Thomas: Thomas is a 2-star RB with 1,027 yards and 17 touchdowns rushing on the season, and he’s also a factor at DB (24 tackles, one interception).

DB Emmett Mosley: Mosley is a 4-star ATH prospect with eight offers including Georgia, Bama, LSU, and some Pac-12s. Currently a top-15 prospect in the entire sophomore class per 247Sports, he has two interceptions on the season as an important contributor in the defensive secondary.

LB Gage Burnett: Burnett has 36 tackles, five TFLs, two sacks, and an offer from Arizona as a sophomore.