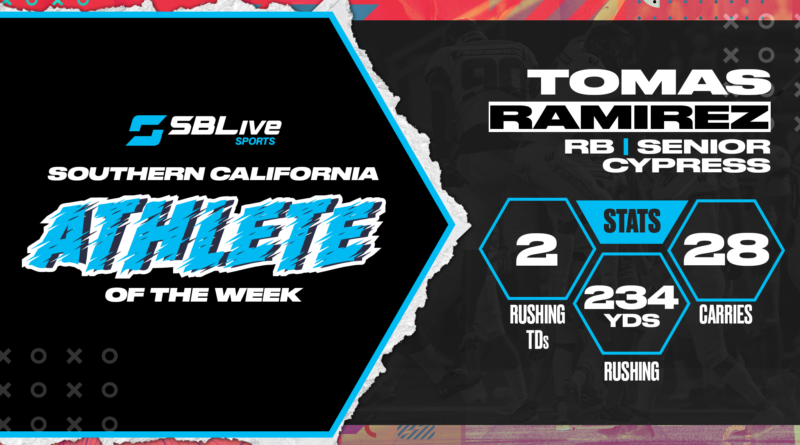 Congratulations to Cypress running back Tomas Ramirez for being voted SBLive’s Southern California High School Athlete of the Week for Nov. 8-14!

The senior had 28 carries for 234 yards and two touchdowns on Friday in a 24-6 win against Bonita.

Ramirez received 52.75% of the vote, beating out Patrick Henry RB Elijah Lux who finished second with 42.3%. Orange Lutheran QB Logan Gonzalez finished third with 1.85% and Pasadena WR Mekhi Fox finished fourth with 1.66%. There were over 55,000 votes tallied this week!

Elijah Brown, Mater Dei QB: Brown was 20 of 26 passing for 369 yards and six touchdowns in Friday’s win over Norco.

Ian Wilson, Silverado QB: Wilson was 11 of 14 passing for 315 yards and six touchdowns in Friday’s win over Elsinore.

Chance Mattson, Ramona WR/DB: Mattson caught three passes for 42 yards and a touchdown against West Hills, and also intercepted two passes, returning one for a touchdown on Friday.

Josiah Lamarque, Newport Harbor WR/DB: Lamarque caught five passes for 115 yards and four touchdowns against Santa Barbara. He also returned an interception for a touchdown in the win.

Tetairoa McMillan, Servite WR/DB: McMillan had seven catches for 100 yards and also had three interceptions, returning one 87 yards for a touchdown in the win over Santa Margarita.

Ryan Feinberg, El Camino Real QB: Feinberg was a perfect 14 of 14 passing for 200 yards while tossing four touchdowns against Jefferson.

Noa Keohuloa, Serra DB: Keohuloa had four tackles, a sack, and a 27-yard interception return for a touchdown against Foothill.