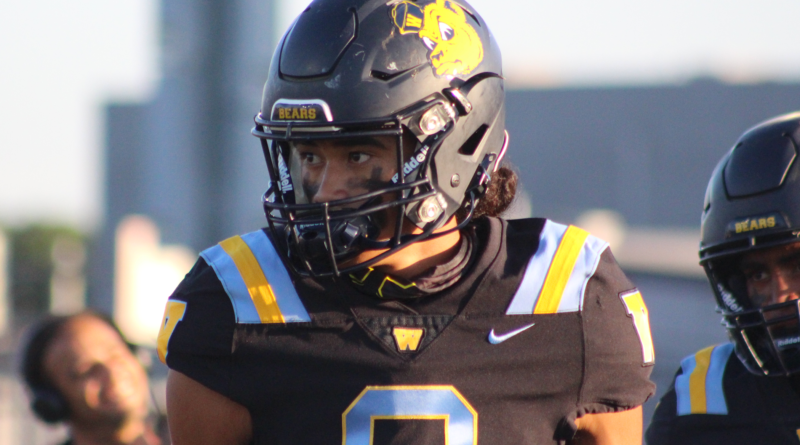 Class of 2023 Warren High School quarterback Nico Iamaleava is taking his second visit to the University of Alabama this weekend. He first visited Alabama last summer and shared his experience with SBLive.

He’d traveled over 2,000 miles with his son Nico, a blue chip 2023 quarterback prospect, to attend a football camp at the University of Alabama and the Crimson Tide coaches didn’t even know the position Nico played.

“I’m looking around and Nico is in a group with linemen and all of the other positions,” Nic recalls. “Then I see all of the quarterbacks in the end zone and Nico’s not there. At that point I’m getting a little upset.”

Nico remembers that moment too.

“Damn, they must think I’m a bum or something,” he thought to himself. “I didn’t know what was happening.”

Nic continued to watch and what he saw next made him even more frustrated. While all of the quarterbacks loosened up on the other end of the field, Nico was going through an obstacle course.

“He was doing somersaults, slides and shuffles,” Nic said.

That was the last straw. Nic marched over to the Alabama football liaison who had been helping them throughout their trip and demanded an answer.

“All of the quarterbacks are over there and you have my son in an obstacle course?” he asked angrily. “Why isn’t Nico over with those guys?”

Slightly embarrassed, the liaison went over to the coaches by the obstacle course to find out exactly what was going on. She returned to deliver Nic a message he’ll never forget.

“I’m so sorry, but Nick Saban is evaluating him,” she said.

“Then I see he has an entourage around him of ten guys and I didn’t see him,” Nic said. “Saban is following Nico around the whole obstacle course. That was the evaluation. They wanted to see if he’s 6-foot-6 and goofy or 6-foot-6 and an athlete. Then Nico started throwing and Saban’s right there on his hip.”

In a 20-minute span the camp went from disastrous to a dream come true. Saban liked what he saw and afterwards invited the Iamaleava’s into his office.

“That was intimidating,” Nic said.

Saban read through his evaluation of Nico before offering him a scholarship. Once the Alabama head coach had finished up, he asked if Nic or Nico had any questions.

“I said to him I can’t even really believe I’m here right now,” Nico said. “My dad clowned me a bit for my response. We were just shocked.”

IAMALEAVA WILL PLAY COLLEGE FOOTBALL WHEREVER HE WANTS

Nico and Nic, who is an assistant coach on the Warren High staff, are constantly in touch with coaches from Georgia, USC, UCLA, Ohio State, Ole Miss, Alabama, Clemson, Texas, Michigan St., Rutgers and Penn State. Iamaleava, who is 6-foot-6 and 205 pounds, had a terrific junior season, completing 162 of 272 passes for 2,244 yards, 33 touchdowns and one interception this fall.

Warren head coach Kevin Pearson remembers a year ago having to work to convince college coaches to offer Nico a scholarship since he didn’t have any film due to COVID-19 postponing the California high school football season to late spring 2021.

“Utah offered him sight unseen,” Pearson said. “A lot of coaches believed me … A UCLA coach called me in January and said I want you to know that we’re offering Nico and that he’s our first offer in 2023,” Pearson said. “[They told me] we’re going to build a recruiting class around him and I want you to convey that to the family.”

But some other schools waited.

“It was really hard to get USC to offer,” Pearson said. “I pressed them so hard and finally sent a text to [three of the coaches] and said, ‘look, this is the last time you’re going to hear from me about Nico.’ I’m not the type of coach to ask you to offer anybody. Who am I as a high school coach to tell you how to do your job? … Just get to know Nico. If you get to know him, you’re going to love him as a young man … Finally, the next week they offered.”

The USC offer came in mid-April and now seven months later, Nico has received a scholarship offer from just about every major program in the country.

Last season he rarely slid or went out of bounds during games – he was always seeking out contact.

“We’re now penalizing him for not doing those things in practice,” Nic said. “We make him do push ups.”

The transition has been tough for Nico because he’s been playing rough his whole life – like the time he tried to play organized basketball.

“In street ball, they don’t call anything,” Nico said. “There are no fouls. When I was 10, my dad put me in basketball and I had five fouls in my first game. I was done. There are too many fouls in basketball.”

After starting out as a scrum half in youth rugby, Nico really began focusing on playing quarterback and competing in volleyball at the age of 10. Rugby helped him decide on football and ultimately basketball and baseball just weren’t for him.

Six years later those choices were clearly the correct ones.

For some families the recruiting process can be overwhelming, but Nico and Nic are taking it all in stride. Last weekend, they went to UCLA before this weekend’s stop in Tuscaloosa.