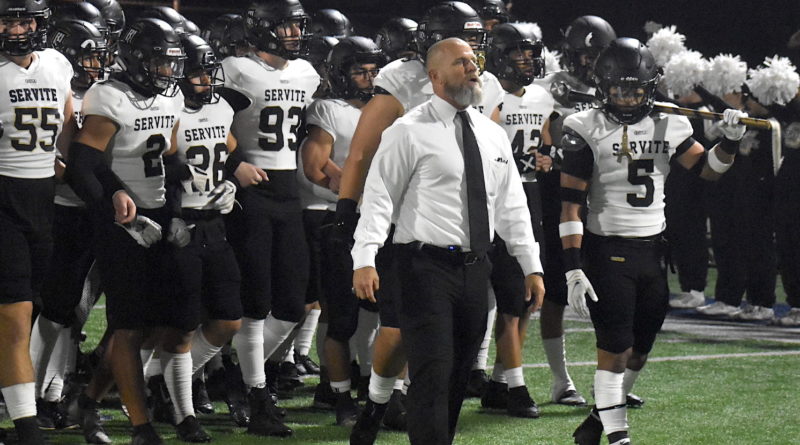 BELLFLOWER, Calif. – In the only game in the country featuring two Top-10 ranked teams – St. John Bosco came into the game ranked No. 4 and Servite No. 8 in the SBLive Power 25 – Servite stunned the Braves 40-21 to advance to the CIF Southern Section Division 1 finals.

With the win Servite put its stamp on CIFSS football history and now gets a rematch with No. 1 Mater Dei next week in the section championship game.

KNOWN FOR THEIR PASSING GAME, FRIARS DO IT ALMOST ENTIRELY WITH THE RUN

If you’re part of the Friar faithful, you may have seen this storyline in game coverage numerous times by now throughout 2021. With perhaps the most feared aerial attack in the country in its repertoire, Servite has now beaten a small handful of great defenses by primarily running the ball during the spring and fall seasons.

Never by running more than on Friday though, and never against as an elite of a defense.

The Friars only attempted eight passes this time, and QB Noah Fifita completed six of them for 47 yards. Everything else came from their run game. Fifita ran for 128 yards and three touchdowns, RB Houston Thomas ran for 134 yards and a TD, and WR Ethan Scaffidi ran for one TD for the Friars on the way to four times more points than they scored against Bosco last time out.

After that effort in league play, it was officially no stretch to say that the Braves’ defense was in the discussion for best in the country. Their coverage in the secondary was still blanketing, but Servite’s offensive strategy was entirely different, and it worked brilliantly.

The Friars have occasionally gone to some decisively non-spread rush-heavy offensive schemes for plays, minutes, or quarters at a time throughout the 2021 year. Essentially never have they spent the majority of a game away from a spread offense, although their win against Santa Margarita in the spring would be an anomalous counterexample, and it worked quite well in that game. This win was filled with designed run plays even though they remained in a spread offense for most of the game, which avoided overtly tipping off St. John Bosco’s defense about their game plan. Their power-esque running sets were generally effective when they went to them though.

“The game plan was to run to the ball,” said Thomas, son of head coach Troy Thomas. “My O-line did a great job, and Coach [Sean] Koelle did a great job getting the plays right.”

FIFITA OWNS THE 1ST QUARTER FOR SERVITE; THOMAS TAKES OVER JUST BEFORE THE 4TH

This match was a game of runs in more ways than one. The Friars primarily won via two decisive runs: to open and close the game.

Their start, through each team’s first two possessions, literally couldn’t have been better. They forced three-and-outs on both of Bosco’s first two drives. And each was followed by emphatic touchdown drives consisting of only runs, primarily by Fifita, who punched in both scores. By the time there was 2:54 left in the first quarter, Servite already led 14-0, possessed all the momentum on both sides of the ball, and offensively had only shown a couple of the tricks in its bag.

St. John Bosco quickly clawed its way back into the game. Rayshon Luke caught a 37-yard touchdown pass from Pierce Clarkson with 1:17 left in the first quarter, and Katin Houser tied it up at 14 with a touchdown strike to Chedon James with 5:11 left in the half. The Braves also held Servite scoreless for almost the entire rest of the first half, but Servite disrupted their momentum with a field goal to take the lead seconds before halftime.

The Friars opened up the second half on offense as they’d closed the third. They marched down into the Braves red zone, but good Bosco defense forced another short field goal that Lucas Gimenez scored. St. John Bosco would then take its only lead of the game after a 78-yard run by Rayshon Luke, which was followed up by a PAT to make it 21-20 with just over five minutes left in the third quarter. At that point, neither team owned the momentum battle.

That would be the last time the Braves would score though, and Servite finished the game on a 20-0 run. Thomas stole the show by rattling off a 71-yard touchdown run with 46 seconds left in the third, which gave Servite a 27-21 lead after a PAT. Then, early in the fourth quarter, he picked off Houser for the first interception of his career, and returned it roughly 25 yards to around SJB’s 20-yard line to set up Scaffidi’s touchdown. Vaka Amasio-Hansen recovered a Mason Graham strip-sack of Clarkson in Bosco’s red zone, Fifita quickly punched in another touchdown to extend the lead to 40-21, and the game was essentially over with nearly half a quarter remaining. Thomas added a few nice rushing gains in the fourth quarter to help burn the clock and secure the win.

Ever since the Friars played Bosco down to a one-point finish in league play in 2019, it was clear that they were the biggest threat of the era to the Trinity League and Southern Section hierarchies. The history they’ve been trying to topple? Both Mater Dei and St. John Bosco have made the Division 1 finals – and been undefeated against the rest of California – every season from 2016 onward. Additionally, no team since 2012 had knocked Bosco out of the playoffs out before the finals.

The Friars never broke through to beat St. John Bosco or Mater Dei in five total regular season matchups since that near-upset against the Braves in 2019. And this was their last chance while they still have their amazing 2022 senior class.

“We’ve been talking about the championship since our camp week in the summer,” said Houston Thomas after the game. “We want this bad, and we’re going to compete for it.”

BRAVES’ STREAKS ARE SNAPPED, BUT THEIR STATUS AS WORLD-CLASS IS SECURE

Any way you slice it, Bosco’s loss was historic for those aforementioned reasons. But the Braves were still a clear top-10 team in the country this season (if not top-five), and despite losing an outstanding senior class, they are guaranteed to be in the mix for national titles in the coming years. Their historic streaks got snapped, but St. John Bosco football is no less elite, or well-positioned for future success, than ever. This just wasn’t SJB’s season to go all the way.

THE SERVITE VS. MATER DEI REMATCH MIGHT BE EVEN BETTER THAN THE FIRST ONE

This rematch was of a regular season matchup that wasn’t even that exciting, and it was still a thrilling spectacle – and outstanding game until its last minutes. Well, Servite’s last game against Mater Dei was a 46-37 loss that, up until the last two minutes or so, was one of the most exciting heavyweight clashes in recent Southern Section memory. And, unlike St. John Bosco, Mater Dei is a fierce rival of Servite.

Well, get ready for that matchup – with everything on the line.