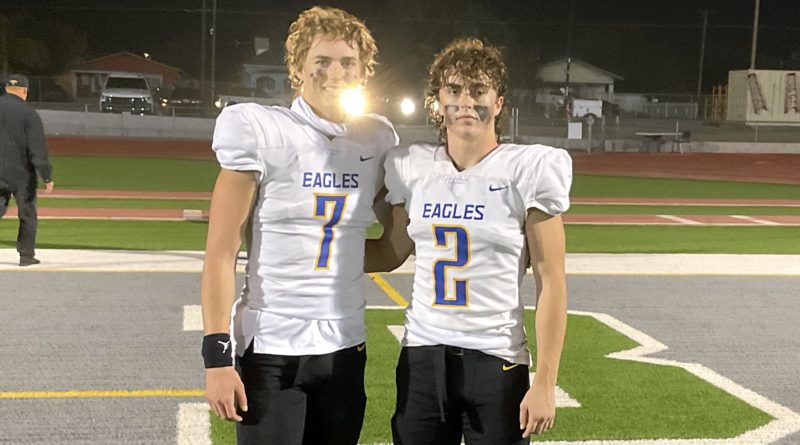 Bakersfield Christian (10-3) will play Central Valley Christian next Friday for the section championship.

Dinuba struck on their first offensive possession of the game, with the drive being capped off by a Sebastian Oliveira touchdown run. The Eagles then scored the next 21 points before Oliveira tacked on his second touchdown run of the half to make it 21-13 Bakersfield Christian at halftime.

The Eagles scored the first touchdown of the second half to go up 28-13 and start a string of back-and-forth scores that would see the game stay at an eight-point lead by Bakersfield Christian into the fourth quarter, with Dinuba getting as close as 35-27 before the Eagles added the final two touchdowns of the contest.

“First off, that is a great football team,” Bakersfield Christian head coach Darren Carr said of Dinuba. “Coming on the road two weeks in a row in adverse situations, we played really solid defense, but offensively we put points up on the board and got up early which was huge for us.”

Offensively, the Eagles were led by their quarterback Waterman, who has overcome a lot to be in this position.

“I’m really proud of him,” said Carr. “If you know his story, he’s battled through cancer for a year. He wants to play football and do well, he wants to succeed. He stays 30 to 45 minutes after practice throwing balls.”

The Eagles, who came into the D-III playoffs as the No. 7 seed, now travel to CVC in Visalia for their second matchup of the season with the Cavaliers. They lost the first one 30-24 way back on Aug. 20.

“It’s like we see those guys twice a year,” Carr said. “I think we played each other like 9 or 10 times in like 7 years, so it’s a rivalry for sure. We’ve got to travel to their place where we have not had success, so we need to lock in, do our job, and play good football.”