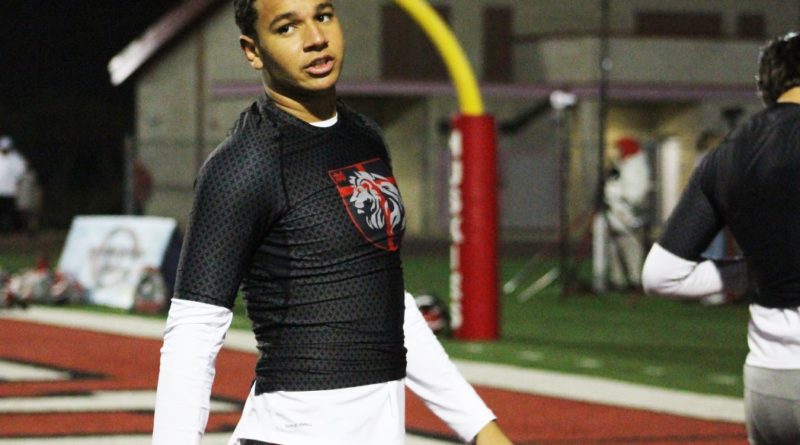 CORONA, Calif. — For the fifth year in a row (excluding 2020 because of COVID-19), Mater Dei football is headed to the upper-Division Southern Section championship. The Monarchs beat Corona Centennial on the road 21-16 to advance to the title game where they will face Servite after the Friars shockingly took down St. John Bosco 40-21 in the other D1 semifinal. Below are five observations from Mater Dei’s victory.

Mater Dei senior linebacker David Bailey and senior running back Raleek Brown played so well on Friday night that after the game Monarch head coach Bruce Rollinson lifted both of their arms with his own and presented them to the Mater Dei crowd.

From there, Mater Dei used Brown to run out the clock. On a third and four from the Monarch 20, Brown picked up five yards to clinch the game. He finished with two touchdown runs on the night.

The Huskies had the ball inside the Mater Dei 5-yard line twice on Friday and didn’t convert either opportunity into points. In the second quarter trailing 14-9, Conklin floated a beautifully lofted pass to Jayson Cortes on a fourth down and seven that Cortes hauled in and brought to the two yard line. On the next play, Centennial was called for a false start and then the Huskies couldn’t get into the end zone with their next four plays.

In the third quarter with the same score, Corona Centennial had first and goal from the Mater Dei three. They gained two yards on a Conklin rush on first down and then had two runs stuffed on second and third down before Carter came in on fourth down and threw an incomplete pass.

When asked if he wished he had kicked a field goal on one or both of those fourth downs, Centennial coach Matt Logan responded. “No. I didn’t think a field goal would help us on the first one and on the second one, we would’ve gone on to lose by two.”

For the first time in his high school career, Mater Dei sophomore quarterback Elijah Brown finished a game with more interceptions than touchdowns (he had one pick and zero TD’s). Centennial managed to make Brown uncomfortable, which no team had done consistently in any of Brown’s previous 14 games as a starter. In the third quarter with a 14-9 lead, Brown scrambled left and attempted a shovel pass that was picked off by Jessee Schumacher. It was an uncharacteristic play from the usually calm, cool and collected signal caller.

“I wouldn’t say Elijah was rattled, that’s a good secondary,” Rollinson said. “They have two four star corners and Elijah had a couple of throws that he probably wanted to get back, but they were doing a lot of stuff. They were moving the front around and had a great game plan on both sides of the ball.”

Mater Dei went on to turn Centennial over on downs on fourth and goal from the one so the interception wasn’t too costly.

Against arguably the best defense in the state, Conklin had a really strong showing. From his first pass, a perfectly timed slant to senior Nathan Jimenez, it was clear the junior was locked in. Conklin tossed a 13-yard touchdown to Jimenez later on Centennial’s first drive to tie the score 7-7. On multiple occasions he kept the Huskies offense on the field after converting on third downs in the game and he also set up Corona Centennial’s second touchdown with a beautiful 41-yard throw.

Conklin split Centennial’s offensive series with Carter, who struggled on the night. On Centennial’s first drive of the fourth quarter, Carter was called for two straight intentional grounding penalties that led to a Huskies punt. When asked about whether he considered sticking with Conklin in the fourth quarter instead of rotating his QB’s Logan responded: “It’s what we’ve done all year going back and forth with them. They both had their mistakes tonight and they both did some good things. They’ll learn from it and get better for next year. They’re both coming back.”

MATER DEI IS BACK IN THE ‘SHIP

The Mater Dei seniors don’t know what it feels like to not qualify for the title game, but this group will be desperate to win it all because Mater Dei’s last championship came in 2018, when this year’s seniors were freshmen. The Monarchs lost to St. John Bosco in 2019 in the D1 Southern Section title game and didn’t compete for a championship a year ago due to COVID-19.

“I’m very excited for the championship game,” Bailey said. “I know Coach Rollo is going to get us right.”