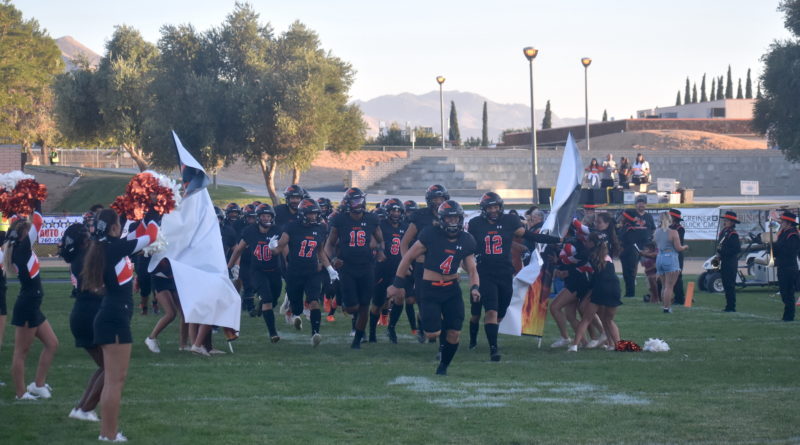 Apple Valley’s surging football program is no stranger to adversity. So if any team in the upper ranks of the Southern Section is wired to defy substantial odds this postseason, it should come as no surprise that the Sun Devils have proven to be that team. They’ve turned heads the past two weeks by knocking off Citrus Valley and Glendora to reach the Division 3 semifinals as major underdogs.

Before a world of adversity struck, they weren’t going to be any kind of underdog in Division 3 this postseason. (They also may have ended up in Division 2 instead.)

After highly competitive season-opening losses against Mission Viejo and Rancho Cucamonga this season, the Sun Devils proved to be the powerhouse they were hyped up to be from the third game of the season on. Their marquee win came on Sep. 3, 27-14 against eventual Southwestern League champion and Division 2 team, Murrieta Valley. Then they won their Bell Game against rival Victor Valley 59-0. Apple Valley would go on to win its next four games against non-league foe Silverado and league opponents Serrano, Sultana, and Hesperia by a combined score of 204-13.

Then, a lot changed during the week of Tuesday, Oct. 19. Lawrence Andrews III, a 14-year-old Apple Valley freshman who played on the junior varsity team, was killed in a hit-and-run, and six days would go by before the suspected driver was arrested and charged. Apple Valley received an outpouring of support from across SoCal, including many other football programs on social media throughout the High Desert and Inland Empire.

The Sun Devils’ winning streak was snapped that Friday, Oct. 22, in a major upset at the hands of Oak Hills. The Bulldogs, one of their biggest rivals, were widely expected to be one of the better teams in recent High Desert history coming into the season, and would live up to the billing. Apple Valley led 14-0 after the first quarter, but Oak Hills fought back to cut the deficit to 14-7 by halftime, and then seven Sun Devils suffered injuries in the third quarter, almost all on offense. By the end of it, Apple Valley was missing 13 starters. And Oak Hills, which had already started a strong comeback bid, went on to win 21-14.

“I’ve never seen anything like it in 20 years coaching,” said offensive coordinator Robert Meras on the slew of injuries.

One thing Apple Valley has had to deal with in the recent past, however, is the tragic death of an underclassman who was popular within the football program. Sophomore Oscar Fuentes died in an accident in April of 2015, which happened to be just a couple months after Matt Rohrbaugh took over as head coach. Under Rohrbaugh, who stepped away from the team for personal reasons during the summer of 2020, and Meras, Apple Valley began a long, steady rise to prominence. In the ensuing years, the substantial cultural shift in the program was largely attributed to the memory of Fuentes, and how the program and community rallied together in his memory. As a result, a tradition of leadership and unity has been passed down for a whole era of Sun Devils football.

“Next man up” mentality is something the Sun Devils not only talked about, but exemplified in the spring season, which was the program’s official coming-out party. In their short but monumentally successful season, they overcame the losses of four key seniors opting out, including Sacramento State commit WR Tyron Smith. Additionally, Meras applied the motto to Godfrey’s smooth transition as their new head coach when he took over for Rohrbaugh.

“The coaches here have always preached ‘next man up,’” said Meras in May. “If you preach it, stand by it, and stick to your guns without flinching, the kids will believe in it.”

Meras even found himself as the next man up against Glendora when Godfrey had to sit out due to contact tracing.

Now, the injury-plagued Sun Devils are in new territory – the CIFSS Division 3 semifinals. As the very bottom seed in the division, they won 21-16 against top-seeded Citrus Valley – which beat Oak Hills in the regular season – even though the roster was still substantially depleted from the Oak Hills game. And on Saturday, they defeated another D3 favorite, Glendora, 17-15, with 4-star Michigan commit QB Jayden Denegal and RB1 Kaleb Most still both out, and many active players dealing with more than just late-season wear-and-tear.

Denegal and Most are still week-to-week, and are continually more likely to return as the underdog Sun Devils keeping buying the two seniors time.

“[Dustin] Reynolds, Samajay [Andrews], and [Noah] Celie come to mind on offense. The O-line is playing very well and loves getting grimy in the trenches. The entire defensive play has been on point these last two games. They’re flying around making plays. Getting stops in key moments, creating turnovers and playing with desire.”

The Sun Devils’ vaunted defense features multiple national recruits in DB Isaiah Ojeda and LB Gavin Hambrick, and is furthermore deep with impact contributors. That includes multiple other serious D-1 prospects such as Reynolds, the reigning league DPOY, and DE Keenan Eck, who had a strip-sack and two more sacks against Glendora. That group, with defensive coordinator Nick Downing, has been one of the section’s better defenses all season, and is carrying a heavy load in this playoff run.

Keeping this campaign alive won’t get any easier as the weeks come for the Sun Devils, who face Roosevelt (Eastvale) this week. But don’t be surprised to see them continue overcoming adversity in what’s already been, by far and away, the most successful calendar year in program history.

One thought on “‘Resilient’ Apple Valley, now in the CIFSS Division 3 semifinals, is still shining in one of its darkest hours”