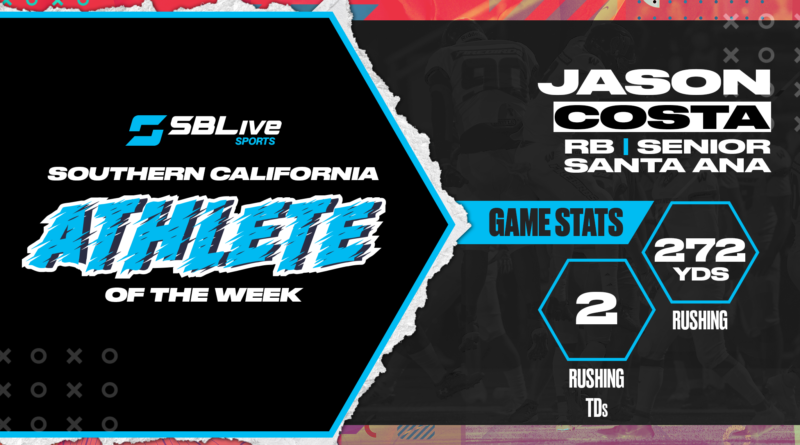 Congratulations to Santa Ana running back Jason Costa for being voted SBLive’s Southern California High School Athlete of the Week for Nov. 1-7!

The senior had 272 rushing yards and two touchdowns in Friday’s playoff win over Mayfair.

Costa received 36.81% of the vote, beating out Long Beach Poly WR Tyson Bordeaux who finished second with 30.75%. Roosevelt RB Jacquez Neal finished third with 18.31% and Norte Vista RB Eddie Allain finished fourth with 4.6%. There were over 106,000 votes tallied this week!

Elia Rubin, Marymount girls volleyball: Rubin led Marymount in kills in leading them to a 3-1 win over Mater Dei in the Southern Section Division 1 championship game.

Fabian Venegas, Sweetwater RB: Venegas rushed for 203 yards and three touchdowns on only ten carries against Valhalla. He also threw a 44-yard touchdown pass in the 73-6 win.

Jack Susank, Mission College Prep RB: Susank had 153 rushing yards and three touchdowns while also grabbing two interceptions on defense in a round one win over Lenore.

Jason Jones, Sierra Canyon RB: Jones had 315 total yards and three touchdowns to help the Trailblazers to a 42-35 win over JSerra.

Jamier Flowers, Venice ATH: Flowers caught six passes for 50 yards and a touchdown, had 50 yards rushing, and returned a kickoff 95 yards for a touchdown in Friday’s win over Kennedy.

Chad Sabal, Hawkins QB: Sabal passed for 164 yards and a touchdown and also rushed for 200 yards and two touchdowns against Wilson.

Troy Fletcher, Edison DB: Fletcher had five tackles and two interceptions including a pick-six against Murrieta Valley on Friday.

Eddie Allain, Norte Vista RB: Allain rushed for 259 yards and two touchdowns on only 16 carries in a two-point playoff win over Monrovia.

Anthony Luna, Western QB: Luna had 267 passing yards and five touchdowns to help the Pioneers get a road playoff win at Lompoc.