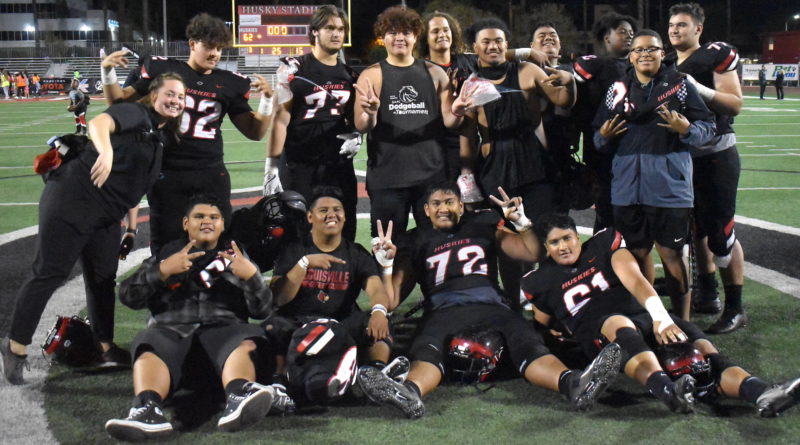 CORONA– Corona Centennial emphatically blew out Mission Viejo 62-16 on Friday, which was the first day of the CIF Southern Section Division 1 playoffs.

The game was not only a heavyweight quarterfinals matchup, but a long-awaited battle between California’s top two public school programs of the past decade. And, it proved to be another signature playoff win for the Huskies. Here are five takeaways from the game:

AS USUAL, HUSKIES DO IT BY COMMITTEE

While a couple players had individual standout nights for Centennial, it was a typical night of the Huskies getting contributions from just about everyone.

Izzy Carter threw touchdown passes to Malachi Riley and Demarieon Young, and ran for two touchdowns and over 100 yards in the first half alone. He ran or passed for three of Centennial’s first four touchdowns, and sparked them to grabbing early momentum.

Carson Conklin, who platoons at QB with Carter, threw a touchdown pass to Nathan Jimenez and had a long rushing touchdown as well. Jayson Cortes, Cornell Hatcher Jr., and Cameron Jones all added touchdown runs. Even with so many skill players getting in on the action, they played just about mistake-free.

Additionally, their devastating offensive line was, well, devastating. The Diablos defense came in with ridiculous totals of 89.5 tackles for loss and 47.5 sacks on the season. The Huskies’ O-line not only kept their QBs from getting touched almost unwaveringly, but created openings so large that Centennial literally jogged in two touchdowns from over 30 yards out. Their frenetic pace and organization, in addition to the skill position players helping with the blocking, demoralized an outstanding defense by early in the third quarter.

Defensively, Centennial didn’t force turnovers, but 16 points was the third-least Mission Viejo has been held to in a loss since 2014. While Mission Viejo’s offensive line was able to create sufficient pass protection for QB Kadin Semonza for a decent amount of the game, the front seven was swarming, and the Huskies’ loaded secondary blanketed its foes too much to allow many big-play attempts, let alone completions.

After Mission Viejo scored its second touchdown of the game with 9:19 left in the second quarter, the Huskies blocked the PAT, and allowed only a field goal for the rest of the game. They finished the contest on a 48-3 run.

Did this game get completely out of hand for the Diablos not long after halftime? Definitely. But the Diablos did spend almost half the game hanging with arguably a top-20 team in the country.

After the Huskies shredded their defense for a touchdown just 66 seconds into the game and then forced a three-and-out, Mission Viejo would immediately climb back into the game on both ends and cut the deficit to one point on a short rushing touchdown by Daniel Dominguez early in the second quarter. That came after a Kenny Manassero touchdown run late in the first that got them on the board.

For what it’s worth, the PAT would’ve tied the game at 14 had Centennial not blocked it, although it likely wouldn’t have made a difference based on how the rest of the game turned out. Still, the Diablos reminded everyone why they’re at least on this stage to begin with.

CENTENNIAL STILL THE TOP PUBLIC SCHOOL TEAM IN THE STATE

While these two streaks don’t get talked about, they’re nonetheless impressive: Centennial has made the Division 1 semifinals (or its equivalent in the prior playoff systems) every postseason since 2012, and hasn’t lost a first-round playoff game since the 90’s. That’s unreal consistency given what it takes in terms of national pedigree to be a Southern Section Division 1 title contender.

If you’ve heard us say it once, you’ve heard us say it a thousand times: Mission Viejo overachieved this season. After losing to San Clemente in the spring and losing a laundry list of key seniors, the young Diablos were widely projected as a Division 2 contender not only before the season, but for nearly half of it. Then, from their resounding 27-10 win against Sierra Canyon onward, it was clear that they’re a top-five team in the section. And they’ve done it with more underclassmen and fewer huge-name recruits than in many other seasons when they made the semifinals and were still ranked only a little higher.

While this is a tough way to go out for the seniors, everyone affiliated with the Diablos know they’ll be back even better next season.