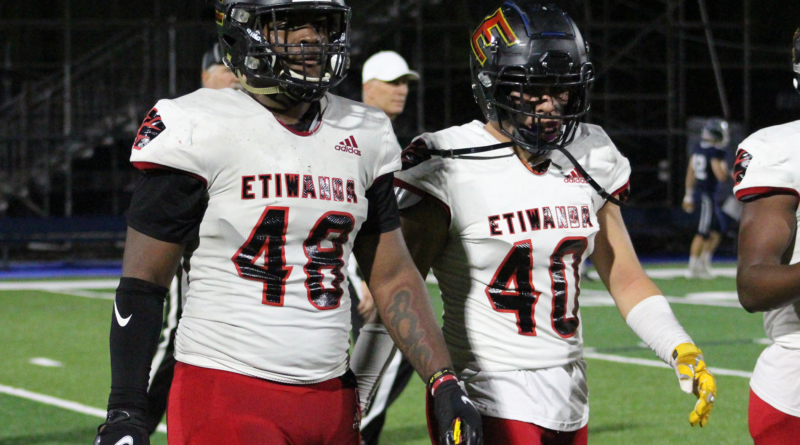 LOS ANGELES, Calif. — Etiwanda’s always been a basketball school, but it’s becoming a football one too. The Eagles went on the road and beat Loyola 28-21 to advance to the Division 3 Southern Section semifinals Friday night. Below are three observations.

ETIWANDA JUMPS OUT TO EARLY LEAD

After Loyola scored on their first possession courtesy of a 41-yard run from Tahj Owens, Etiwanda rattled off the next three touchdowns in the game to take a 21-7 lead. After Owens’ scamper, senior Etiwanda quarterback Zach Congalton led the Eagles on a lengthy TD drive that culminated in a one yard touchdown run from Saipeti Maiava Jr.

On the first play of the second quarter, senior linebacker Luke Toki intercepted Loyola quarterback Joe Tatum and returned the pick 70 yards for a touchdown. Then with 4:47 left in the first half, Congalton lofted a beautifully thrown 29-yard touchdown pass to senior receiver Norion Espadron making the score 21-7 Etiwanda.

“We had a bad first series, but after that I thought our defense responded and got after them a little bit,” Etiwanda head coach Nick Baiz said. “I’m proud of our guys.”

The Eagles defense made what ended up being one of the key plays in the game after their third touchdown when a swarm of Etiwanda defenders ripped the ball out of Loyola receiver Jacoby Kelly’s hand and Jayden Byrd recovered at the Etiwanda 20-yard line. That turnover didn’t lead to points for Etiwanda, but took potential points away from Loyola. At the half, Etiwanda led 21-7.

LOYOLA FIGHTS BACK IN THE FOURTH QUARTER

Etiwanda went ahead 28-7 with 4:22 to play in the third quarter when Congalton hit Jordan Williams on a short pass that he turned into a 30-yard touchdown. At that point, Loyola’s season looked over.

But the Cubs didn’t give up.

Midway through the fourth quarter, Jordan Hewitt intercepted Congalton and then Loyola marched down the field and scored on an Owens three yard run to make the game 28-14 with 7:43 to play. Loyola didn’t recover the ensuing onside kick, but their defense held and Etiwanda punted the ball back to Loyola minutes later. Once again, the Cubs marched down the field and Tatum connected with a wide open Peter Vanis with 2:44 to play. That touchdown made the score Etiwanda 28, Loyola 21.

The Cubs used all of their timeouts on the Eagles’ previous possession, so after failing to recover a second onside kick, one Etiwanda first down would end Loyola’s season.

But the Eagles couldn’t get it.

With 30 seconds to play, Etiwanda attempted to kill off the game on a fourth down and two from the Loyola 41. Congalton handed to Williams and he dashed to the right, fumbled, and Loyola’s Jackson Shea recovered.

The Cubs somehow had life.

Loyola’s hope quickly turned to despair though because on the next play of the game, Maiava Jr. intercepted Tatum to clinch the Etiwanda win.

“We knew they weren’t going to quit,” Baiz said. “They’re too good and well coached. They come from a class program. We just had to finish.”

ETIWANDA MOVES ON TO THE SEMI’S

With the win, Etiwanda stays perfect on the season at 12-0. The Eagles will host Gardena Serra in the semifinals.

Baiz is in his third season at Etiwanda. The year before he arrived at the school, the Eagles went 4-6. In his first season, they improved to 6-6 winning a playoff game. Now they’re undefeated and two wins away from a CIF championship.

“Our players have busted their tails ever since I got here,” Baiz said. “We have great assistant coaches. We have great players. We have great families and a great administration. I’m not shocked with what we’re doing, but two more wins would be nice.”