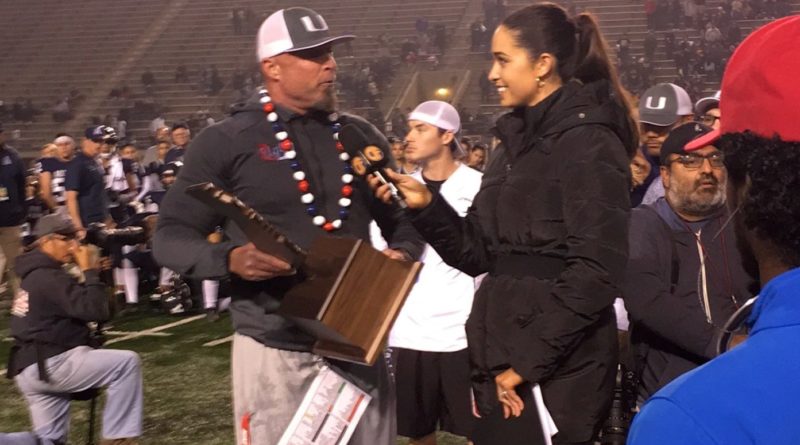 As all of Northern California high school football is now in the postseason, we’re asking the question: which coaches have helped their teams to overachieve during the 2021 fall season or improve dramatically from a year ago?

The list is not exhaustive, but here are 12 names to consider across the North Coast, Central Coast, and Sac-Joaquin Sections, in no order.

As it stands heading into the playoffs, the NorCal coach of the year has to start with Greg Calcagno, whose Lancers have taken the region by storm. Some coaches and other voices around the WCAL were predicting a huge year for Saint Francis, but nobody called their eruption as the undisputed best team in the Bay Area and top-ranked team in Northern California.

They made waves on Sep. 10 by ending De La Salle’s unbeaten streak of 318 games against Northern California competition (anywhere north of Kern County), which dated back 30 years. Since that was only its second game of the season, Saint Francis had not yet registered a major statement win as the juggernaut it’s been this season, which added a shock factor. But ending “the streak” turned out to be just the beginning. The Lancers would go on to sweep the West Catholic, with its closest call being a 41-27 victory against Valley Christian. In the last game of the season, they knocked off incumbent heavy favorite Serra 44-21 to cement it.

If Saint Francis runs the table through the state semifinals (regional bowl games), NorCal will have a clear coach of the year frontrunner.

Rocklin was widely pegged as one of the best teams in Northern California coming into the season, but to see unwavering dominance through such a tough schedule is rare. For a team to do it with a handful of key personnel banged up, most notably 2-star QB Kenny Lueth missing the second half of the season, is amazing. Finally, while he certainly inherited a powerhouse, Sam Pulino doing it in his first season as Rocklin’s head coach makes it even more impressive.

The Sierra Foothill League champion’s closest call this season was a 26-6 win over runner-up Granite Bay. The Thunder’s shocking 40-7 beatdown of Folsom was arguably its most lopsided victory of all of league play. Before SFL play started, Rocklin beat a formidable Capital Christian squad by 29 points. Pulino’s coach of the year resumé so far is spotless.

League titles and dominant seasons are not new for the Raiders under Roger Canepa, but Central Catholic was nearly untouchable this season on way to a VOL title. They went 6-6 in 2019 and had a ho-hum 3-2 spring campaign, so with a lot of roster holes to fill, not many people expected them to roll to the 9-1 tour de force that they have. There’s no specific narrative to attribute to Canepa’s candidacy this season, but with almost no established D-1 prospects on the roster, the Raiders beat St. Mary’s (Stockton) and San Ramon Valley before shutting down the wildly competitive Valley Oak League by double-digit margins of victory every game. Their only loss came by one score in non-league play to another team that turned heads this season: Bellarmine.

Whereas Central Catholic’s season was a VOL Goliath doing its best Goliath, Kimball’s was a case of a David turning into a near-Goliath itself. Kimball fell surprisingly lopsidedly (55-16) to the Raiders in the league title match, but the Jaguars otherwise proved themselves as a new force to be reckoned with in mid-lower divisions of the Sac-Joaquin Section. Technically the spring, in which Mike Kuhnlenz led them to a 3-2 finish, was the first winning season in school history. But something about 9-1 and a second place finish in one of the most competitive Valley Oak League races ever probably feels a lot more official. Grim inherited a significant group of talented returners in his first season at Kimball, but whatever he’s done to elevate them to prominence makes him a compelling COY candidate on a statewide basis.

Coming into the fall, Bellarmine hadn’t won four games since 2017, and hadn’t played .500 ball since its 7-5 campaign in 2016. In just his second season (and first calendar year) as the Bells’ head coach, Jalal Beauchman has them at 7-3. Bellarmine started the season with a head-turning 56-41 win against Menlo-Atherton, avenged losses from the spring season against more powerhouses in Central Catholic and Valley Christian, the latter of which beat them 36-0. They do have one large blemish on their record, a 20-13 upset loss against Sacred Heart Cathedral Prep, but their only others came against Saint Francis and Serra. Even with a bad loss in the mix, that’s still a regular season worthy of COY contention for Beauchman.

Windsor has been a solid program for a while, outperforming most of the rest of the North Bay relative to enrollment for years. Additionally, it appeared that Windsor was in store for a good season after the spring campaign. The Jaguars only went 2-3, but they beat Rancho Cotate, two losses came against Cardinal Newman, and one came impressively closely against Marin Catholic – and most of the core was juniors.

This fall though, the Jaguars have popped off more than anyone predicted. Former longtime Newman coach Paul Cronin took over after the spring season, and they’ve gone 8-1 with borderline-blowout wins over strong, underrated foes such as East Union, Montgomery, and Benicia. Their only loss came by one point in the last game of the regular season against another resurgent Sonoma County program: Rancho Cotate.

In 2017, Gehrig Hotaling inherited a Cougars program that 28-year head coach Ed Conroy had built into the clear second dog in the county. Since then, he’s kept them head and shoulders above the rest of Sonoma County, although they hadn’t been able to break through to the top yet coming into this season. The only exceptions during that time would be a non-league win against Newman in 2017 (which was followed by a league loss to Newman shortly thereafter) and a loss to Windsor this past spring. The Cougars also made a state title game in 2019.

This fall, Rancho didn’t get anymore hype than usual coming into the season, as a lot of the local spotlight was on Cronin’s move to Windsor, and Newman still remaining the incumbent alpha. Furthermore, the Cougars have inexperienced underclassmen up and down the roster at key positions. But this fall would be the season that The Ranch proved itself as the top team in the county, pulling off slight upsets against the Cardinals and Jaguars by three total points in the last two weeks of the regular season. The Cougars started the season with a close win against Las Lomas but fell to a retooling Acalanes squad in their second game, firmly planting them under the radar. And while they filled the rest of the regular season up with strong wins, their week-over-week improvement on defense to get where they are now was remarkable. By the time they pulled off their NBAL – Oak title run, it was clear that they belonged at the top.

After taking over a program that went 0-6 in the spring, C.J. Anderson – yes, that C.J. Anderson, the former Pro Bowl RB – has the Mustangs sitting at 7-2. It’s not like they were an outright bad team in the spring, despite their record; the Mustangs’ losses against Acalanes, California High, Clayton Valley Charter, and San Ramon Valley all came down to one score; their other two losses were against De La Salle and Jesuit. But to come back just a few months later and start the season 7-0, with non-league wins including Liberty (Brentwood), El Cerrito, and James Logan, and league wins over Amador Valley and California? Impressive and resilient. They even secured a top-four seed and home game in the CIFNCS Division 1 playoffs.

Speaking of Clayton Valley Charter, one of just two teams to beat Monte Vista this season, the Ugly Eagles just secured their second straight EBAL – Mountain championship. They finished the regular season ranked second in the entire North Coast Section despite losing almost all their top statistical producers from the spring. That group, their 2021 class, was the core of their 2019 CIF 2-AA state Championship run. Murphy said before this season that they felt good about the key guys they had coming back, but the Ugly Eagles have still achieved what they have this fall with out returning their starting QB, their RB1, their three leading tacklers, anyone who registered an interception in the spring, and anyone who had more than four catches in the spring. Murphy’s last season before retiring has proven to be one of his best coaching jobs yet.

The last NCS team on this list, Antioch, has the tough task this week of taking on that Clayton Valley squad in the playoffs. But the Panthers have already had a tremendously successful fall season after a rough spring. Last season, they went 1-4 in the Bay Valley Athletic League, and other than their 28-0 rout of Deer Valley, their four losses came by a margin of 28-128. Antioch is somewhat senior-heavy, but not so much that its leap from near the bottom of the BVAL to near the top can be written off due to lots of returning talent. The Panthers did a resilient job of shaking off that challenging spring to go 6-4 this season, 4-1 in BVAL play, with revenge successfully inflicted on league foes Freedom, Heritage, and Liberty. Even their season finale against Pittsburg, a 34-13 loss, showed that they at least belong on the same field with elites.

Raise your hand if you had Jesuit getting a top-two seed in the CIFSJS Division 1 playoffs this season.

Unless you’re part of the Jesuit community, you’re either not raising your hand, or you’re probably lying.

A solid season seemed to be in the books for the Marauders, who returned a decent chunk of their core as seniors coming into the fall. But with a lot of key seniors gone and no league titles under their belts since 2017, it’s hard to easily explain how they turned into world-beaters this season. Even with a few nationally-ranked players, the Marauders have been annihilating teams with as much or more established talent all season long. They got blown out by Folsom to start the year, beat Granite Bay 28-14 the following game, and since then blew out the likes of Christian Brothers, Inderkum, Cosumnes Oaks, and Elk Grove for an emphatic Delta League title. Now, they’ve ascended to the elite ranks of not only the Sac-Joaquin Section, but all of Northern California.

Sacramento wasn’t at or near the top of its league this season, but Justin Reber still had a COY-worthy campaign in his second season back with the Dragons. They went 2-2 in the spring and 2-8 the previous season. Up until this fall, they hadn’t had a winning season since 2017, and while their extremely young core had a promising four-game spring, it was hard to foresee the explosion they’ve had this fall. Now 9-2, with a playoff win over Golden Valley under its belt, Sac High is playing some of its best football in a long while with underclassmen leading the charge. Reber has the Dragons positioned to continue rising for a long time.