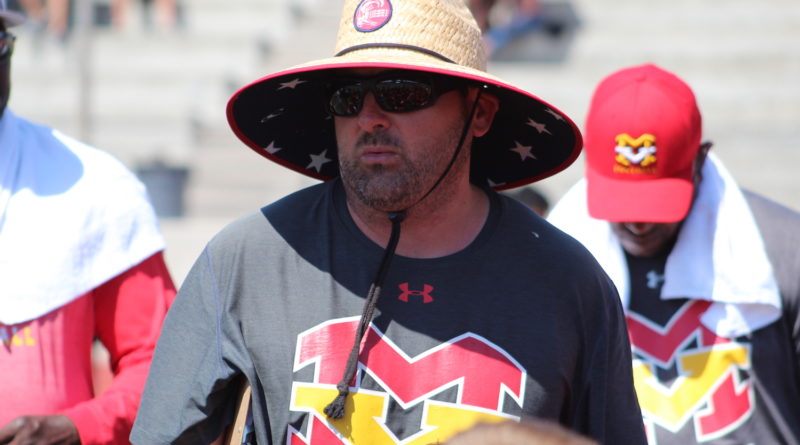 Before this season, the Eagles had last won a Baseline League title in 2009 when they split it with Los Osos. This year, Etiwanda won it outright.

“I’m just really excited for our players, especially the seniors who have worked so hard for this moment,” Baiz told the Daily Bulletin after Etiwanda beat Rancho Cucamonga 30-28 to clinch at least a share of the league title in October. “We came here looking to establish a championship culture. The kids bought into that and made this happen.”

In only three years on the job, Baiz has succeeded in establishing a championship level culture at Etiwanda — the results speak for themselves. The Eagles are the No. 2 seed in Division 3 and are now favorites to win the title after No. 1 seed Citrus Valley fell in the first round to Apple Valley. Plus, Baiz’s Eagles team won a league title for the first time in over a decade. The third year Etiwanda coach is certainly on the shortlist for Southern Section high school football coach of the year.

Batdorf’s Norte Vista team had a strong spring going 4-1, but this season the Braves are even better. In the spring, Norte Vista fell to Hillcrest 29-21. This year, the Braves blanked the Trojans 28-0. In the first round of the Division 6 playoffs, Norte Vista held previously undefeated Monrovia to their lowest point total of the season in a 27-25 win. There are some heavy hitters left in the Division 6 playoff field including Camarillo and Culver City as well as the Braves’ second round opponent, Temecula Valley. Each Norte Vista postseason win beefs up Batdorf’s coach of the year resume more and more. The Braves are extremely well coached and are having a special season.

Similarly to Norte Vista, Carson’s Rio Hondo Prep team had a very strong spring but are having an even better fall. Last week in the first round of the Division 7 playoffs, the Kares knocked off traditional San Gabriel Valley power Charter Oak 37-30. That’s the type of victory that puts a coach on the map for coach of the year honors. Rio Hondo Prep has a realistic chance to make the Division 7 title game. If that happens, the Kares may meet Pasadena which would set up an All-SGV championship where Rio Hondo Prep would be definite underdogs. If they were to win that matchup, Carson becomes a shoo-in for coach of the year.

Not many coaches could win their first round playoff game 42-14 with a backup QB, but that’s exactly what Grady pulled off last Friday as quarterback Tyler Gioia threw for 294 yards and four touchdowns in a victory over Murrieta Valley after starter Parker Awad was ruled out due to COVID-19 protocols.

From going toe to toe with Los Alamitos, a Division 1 playoff team, to last Friday’s big postseason win, Grady has put together an impressive coach of the year resume so far in 2021. This week, the Chargers play an Inglewood team on the road loaded with Division 1 commits. It’s another opportunity for Grady to show why he’s considered one of the top coaches in the Section. If Edison ends up winning the Division 2 title this year, the coach of the year race would be over, the honor would belong to Grady.

Before the season started, Johnson tried to temper the expectations for his Diablos team.

“We have a lot of non-league games where we’ll be the underdog, where in past years that I’ve been there, we’ve been picked to win most of our non-league games,” he said.

There were legitimate concerns about Mission Viejo’s defense since they’d lost ten starters from the spring season.

“We don’t have the Division 1 studs on defense like we had in the past, so we’re doing some more creative things with our front to try and create some chaos,” Johnson said in the summer.

Since then, the Diablos have gone 9-1 and qualified for the Division 1 playoffs in the Section. Mission Viejo’s defense gave up an average of 8.3 points per game in South Coast League play this season — they’ve been terrific.

Finishing as the fifth best team in the Southern Section is a major overachievement for Mission Viejo and for that, Johnson is a prime contender for Southern Section high school football coach of the year.