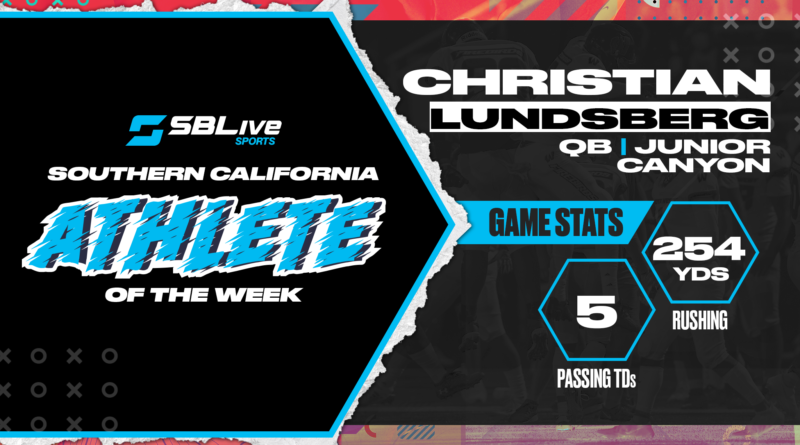 Congratulations to Canyon quarterback Christian Lundsberg for being voted SBLive’s Southern California High School Athlete of the Week for Oct. 25-31!

The junior passed for 254 yards and five touchdowns against Esparanza on Friday.

Lundsberg received 43.94% of the vote, beating out Walnut RB Ruben Rivera who finished second with 36.21%. Trabuco Hills RB Drew Barrett finished third with 8.33% and Vista Murrieta RB Gavin Galzote finished fourth with 6.43%. There were over 125,000 votes tallied this week!

Samuel Cooper IV, Lincoln QB: Cooper passed for 112 yards and two touchdowns, rushed for 205 yards and four touchdowns and even caught a 27-yard touchdown pass in Friday’s win over Coronado.

Kian Salehi, Campbell Hall WR/DB: Salehi caught four passes for 102 yards and three touchdowns, rushed for a 23-yard touchdown and had an interception in Friday’s win against Brentwood.

Ben Emery, Verdugo Hills WR: Emery had five catches for 197 yards and two touchdowns and also returned a punt for a 62-yard touchdown against North Hollywood.