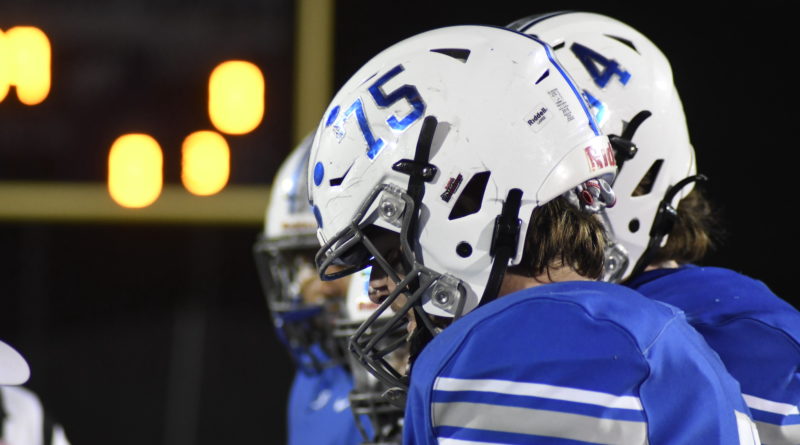 RANCHO BERNARDO, Calif. — Everything was lining up for Bishop’s to grab a huge playoff win at Rancho Bernardo on Friday night until the Knights’ game-winning field goal attempt from 20 yards out hit the right upright and bounced into the end zone as the game clock hit triple zeroes.

Rancho Bernardo’s sideline erupted, rushing out on the field to celebrate their 15-14 win over Bishop’s in the San Diego Section Division 2 playoffs as the ball came to rest on the field.

HEARTBREAK FOR THE KNIGHTS

After surrendering the go-ahead touchdown with 1:21 left in the game, Bishop’s started with the ball on their own 24-yard line and a full complement of timeouts.

Junior quarterback William Fierro connected with Jaden Moore near the right sideline on the second play of the drive before Moore began to dart and weave his way around tacklers and across the field, eventually getting pushed out of bounds at Rancho Bernardo’s ten-yard line. Back-to-back running plays gave the Knights third down and goal from the three-yard line.

Bishop’s head coach Shane Walton allowed the clock to run down to two seconds before calling timeout to setup the potential game-winning kick.

Rancho Bernardo countered by calling their final timeout to ice Bishop’s kicker Will Cluskey. Following the timeout, Rancho Bernardo was called for consecutive offsides penalties after a player hopped over the center, trying to time the snap and block the upcoming kick.

I’ve seen the icing thing backfire, so I was kind of rolling the dice… I told the kids to time it, maybe get an offsides penalty to get them closer for a worse angle,” Rancho Bernardo head coach Tristan McCoy said. “We were just trying everything.”

The field goal attempt went up and banged off the right upright, sending Rancho Bernardo a new lifeline while the Knights looked on in agony.

RANCHO BERNARDO’S OFFENSE COMES THROUGH WHEN IT MATTERS

Rancho Bernardo’s rushing attack was stifled for much of the night against the Knights’ crew up front, forcing them into five punts across their nine possessions.

But when it mattered most, Rancho Bernardo extended their passing attack just enough to keep Bishop’s honest. It worked immediately, sending the Broncos down the Bishop’s side of the field and into the red zone. Knowing that senior Frankie Franchina is the target around the goal line, the Broncos dialed up something different, finding senior fullback Antonio Barcelos for a one-yard touchdown dive that put them ahead 15-14.

“We’re playing our fourth-string quarterback,” Tristan Mccoy said. “He managed to hit one of our guys in open space and he made a play and got us down there.”

The Broncos missed the ensuing two-point conversion and found themselves defending a one-point lead with just over 80 seconds remaining.

Poway and Rancho Bernardo have been playing their annual rivalry game each season since 1992 but next week’s battle will only be the second time that the pair have met in the postseason.

In last week’s matchup to end the regular season, Rancho Bernardo moved the ball but hurt themselves with errors on offense and special teams that directly resulted in points for Poway.

“Well, we threw an interception for a touchdown, and we allowed a kick for a touchdown, take away those two plays and it’s a 14-14 game,” Tristan McCoy said. “Against good teams you just have to eliminate those dumb mistakes.

It won’t be easy for the Broncos to take on their rivals one week removed from a two-touchdown loss, but this Rancho Bernardo group is determined to not go home.

“These kids are pretty resilient, we’ve been down a few times this year and they keep battling and don’t give up,” McCoy said.