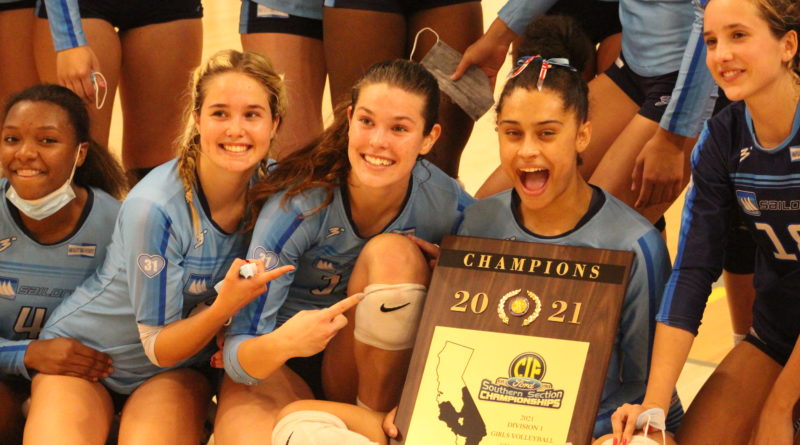 MANHATTAN BEACH, Calif. – Cari Klein still isn’t ready to crown this year’s Marymount team as the best she’s ever coached at the school even though her Sailors took down Mater Dei 3-1 in the Division 1 Southern Section championship game and enter the state playoffs with a perfect 31-0 record.

“They’re so good and they’re so poised, but you haven’t seen them at their best, they have another level in them,” Klein said following Marymount’s victory.

If the Sailers reach that level and go on to win an upper Division state title, there won’t be any more questions. Marymount has never had an undefeated girls volleyball team at the school.

In Saturday’s Southern Section championship match, each set was decided by two points. Mater Dei was a much improved team from September when they lost 2-0 to the Sailors in a tournament.

Marymount took the first 27-25 and the second 25-23 before Mater Dei fought back to win set three 25-23. Marymount won set four 25-23 to clinch the title thanks to a devastating kill from senior Stanford commit Elia Rubin.

“We’re so pumped,” Rubin said. “Mater Dei came out super strong and they wanted it. I think the pressure was definitely on our side of the net and at times it got to us but we knew to settle down and trust what we’ve been doing all season because clearly it was working. We were more focused on our side, simplified our game and do what we do. It ended up working out for us.”

In addition to Rubin, senior Duke commit Kerry Keefe played a big part in the championship win at outside hitter, as did junior outside hitter Torrey Stafford, a Pitt commit. Senior libero Megan Verblest, a USC commit, played like a true defensive specialist in the match reaching down for dig after dig.

Mater Dei senior setter Shanelle Puetz and senior outside hitter Jordyn Schilling played well for the Monarchs in defeat. Mater Dei showed they’re capable of potentially beating Marymount on a different night and they may get that chance. The two schools could meet for a third time in the state playoffs.

But Saturday belonged to Marymount.

“This feels like a relief,” Klein said. “We’ve lost so many close ones and heartbreakers against them, it’s just a relief, but we’re not done with this season yet.”