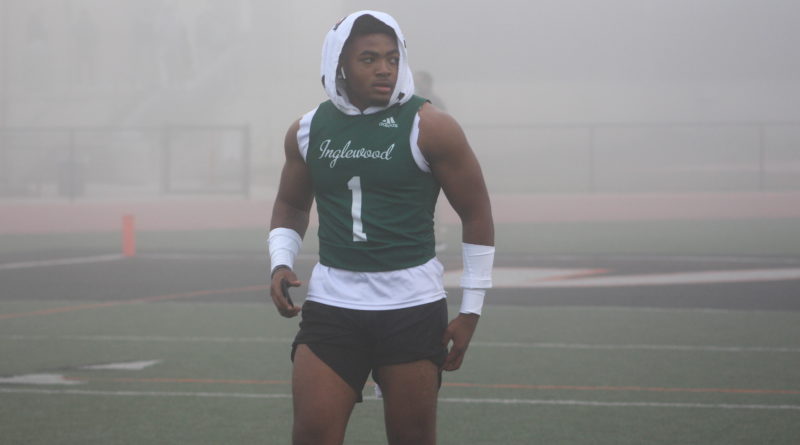 VENTURA, Calif. — A week after making national headlines in a 106-0 win over Morningside, Inglewood leaned on its talented defense to earn a 26-10 win over St. Bonaventure in the first round of the Division 2 Southern Section football playoffs on Friday.

The Sentinels played fast and extremely physical football on defense and only allowed two scores after a fumble recovery and an interception gave the Seraphs short fields. Inglewood was in control of the game from the jump after scoring on their first possession courtesy of a 14-yard touchdown run from TJ Harden.

Like every game they’ve played this season, St. Bonaventure came out running the ball with junior Delon Thompson. Coming into the first round clash, Thompson had scored at least one touchdown in all nine St. Bonaventure games this season. Inglewood kept him out of the end zone on Friday.

Senior Washington State commit Taariq Al-Uqdah made tackle after tackle for Inglewood including a key fourth down stop at the end of the first half that ended any chance the Seraphs had of taking momentum into the locker room at halftime. At the break, Inglewood led 20-3 following the Al-Uqdah tackle for loss.

St. Bonaventure cut the deficit to 20-10 in the fourth quarter following a Nick Miller interception that gave the Seraphs the ball at the Inglewood 14, but their inability to move the ball when not given a short field ended any hope of a comeback bid. The Seraphs longest scoring drive was that 14-yard one. Inglewood’s defense was simply too tough.

Harden, a UCLA commit, finished the game with 132 yards rushing and a touchdown. Inglewood forced a punt after Harden’s touchdown on their first drive and the Sentinels marched right down the field on their second possession and scored again on a 15-yard pass play from Justyn Martin to Justus Ross-Simmons.

In the second quarter, Martin connected with Jamari Johnson on a 60-yard completion which set up a one-yard Al-Uqdah touchdown. Al-Uqdah scored again in the fourth quarter from one yard out to put the game away, giving Inglewood a 26-10 lead.

The Sentinels move on to play Edison in the second round next week.

After Friday’s victory over St. Bonaventure, Inglewood’s coaches and players refused to speak to the reporters who were at the game. Most of their displeasure was directed at Sondheimer.

“We’re not doing any interviews,” an Inglewood football coach, who wished to remain anonymous, told SBLive after the game. “Nothing. One media outlet ruined it for everybody because they painted a picture that’s not true. What I will tell you is, you watched this whole game, every field goal we kicked, we missed. That’s why we went for two [against Morningside] because we don’t have a kicker. On top of that we got a penalty on that [final] score and it put us on the 20-yard line. If we can’t make it from the two, how can we make it from the 20? That’s the facts.

“You guys witnessed the game [tonight]. You were on our sideline and saw that we’re full of class and full of energy. It’s young energetic kids that play for their coaches. That’s what it’s about. The media portrayed us to be something that we’re not. You see that we only have 35 kids dressed. Every kid played last week on a 35 person roster and damn near every kid played today so how were we not playing everyone when we need every resource to play a game? … The media won’t get any quotes from this program, especially the head coach. Blame Eric Sondheimer.”