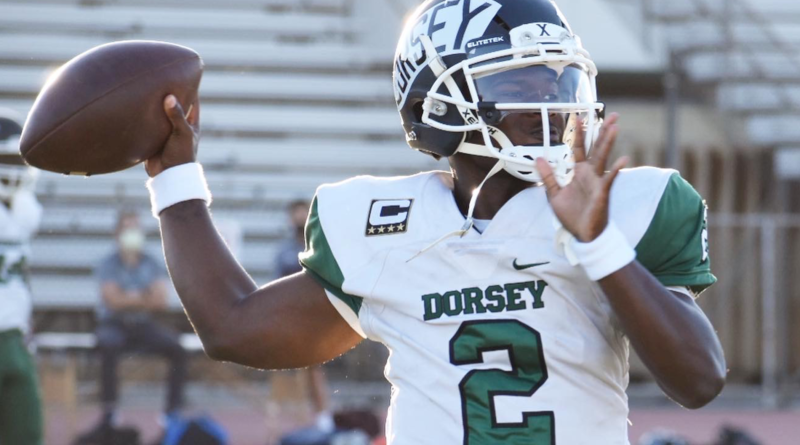 The LA City Section released its 2021 high school football playoff brackets for all four divisions on Saturday. Ahead of the first round games on Nov. 5, we’re previewing every playoff division from the Open Division to D3. Since the Open won’t start until next week, we’re starting with Division 1.

Here’s everything you need to know about the D1 bracket:

The No. 9 Cleveland vs. No. 8 Huntington Park opening round game should be a good one along with the No. 11 Dymally vs. No. 6 Eagle Rock showdown, but the most entertaining first round game on paper has to be No. 13 Canoga Park (5-4) against No. 4 Franklin (8-2).

For the high school football fans that like offense, this one’s for you. Assuming Canoga Park will be at full strength (the Hunters were waiting on some vaccination clearances earlier this week), both teams are capable of lighting up the scoreboard. Canoga Park will bring a balanced rushing attack to Franklin High on Friday led by senior Kayden Collins and junior Dane Reed. So far this season, Collins has rushed for 1,569 yards and 17 touchdowns.

Franklin takes the opposite approach on offense — the Panthers run a spread and try to throw the pigskin all over the field. Senior QB Isaiah Diaz has thrown for 2,456 yards and 35 touchdowns this season, but he’s also been intercepted ten times. Senior receiver Hector Ceballos has hauled in 18 of those touchdowns.

This game will come down to which defense can get a stop in crunch time.

Editor’s note: No. 7 Crenshaw had to forfeit due to not having enough vaccinated players, so No. 10 South East automatically moves on to the second round and will play the winner of the No. 15 Kennedy vs. No. 2 Venice game.

No. 16 Chatsworth (6-4) vs. No. 1 Dorsey (8-2): Dorsey has too much star power for a Chatsworth team that is on the rise, but got a bad draw as the No. 16 seed in the division. Dons’ senior receiver/defensive back Mychai Williams is a threat on both sides of the ball. He’s intercepted nine passes this year, a Dorsey school record.

No. 9 Cleveland (5-2) vs. No. 8 Huntington Park (6-4): This game is very tough to pick. Cleveland is hot having won three straight games, but Huntington Park has a really impressive victory on their resume, a 30-29 win over Garfield, an Open Division team. In last week’s 22-6 win over Chatsworth, Cleveland running back Messiah Jordan broke free for a 55-yard TD. He may be the difference maker on Friday for the Cavs.

No. 14 Granada Hills (4-5) vs. No. 3 Reseda (7-2): Star Granada Hills running back Dijon Stanley didn’t play for the Highlanders in their 30-14 win over Taft last week. If he’s out again this week, that’s a major break for Reseda. The Regents took down rival Canoga Park 22-12 last week to win the Valley Mission League. Anthony Morris threw a TD and rushed for a second in that game. He’ll be the x-factor on Friday. If he avoids turning the ball over, Reseda wins.

No. 11 Dymally (9-0) vs. No. 6 Eagle Rock (5-2): Dymally has beaten eight of their nine opponents by a minimum of 22 points this fall. The Challengers haven’t faced a team as talented as Eagle Rock so far this season though.

No. 15 Kennedy (8-2) vs. No. 2 Venice (4-3): This game will be closer than the 15 vs. 2 seedings indicate. Kennedy has had a great season led by senior running back/linebacker Sione Manu. The Gondoliers have one of the City’s biggest explosive play threats in junior Rashawn Jackson though. He should lead Venice to a victory.

WHO WILL WIN THE D1 TITLE?

This Division feels wide open. In the bottom half of the bracket, a 2019 Division 1 semifinal rematch is likely between Reseda and Venice. The Regents won that game 42-41 and went on to play for a state title. On the top half, Dorsey is the favorite, but the Cleveland/Huntington Park winner could definitely pull off a second round upset. Franklin’s high powered offense makes the Panthers a threat too, as does Arleta’s dominant running game.

Having to choose one, Venice getting revenge on Reseda and going on to win it all would make for a great story.