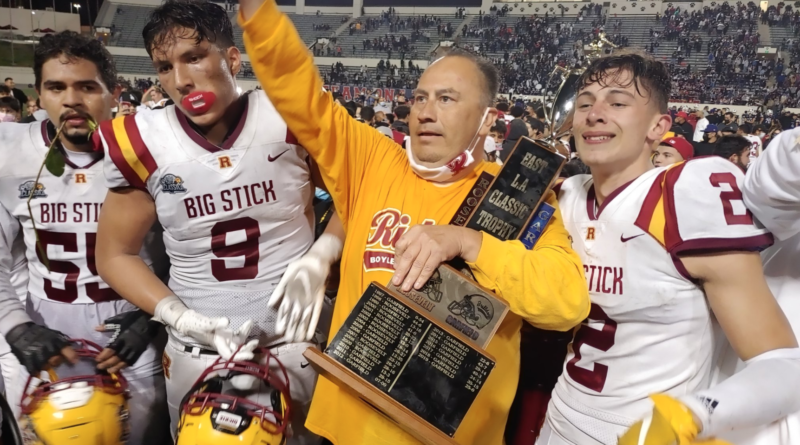 The fall 2021 high school football regular season wrapped up for teams in the LA City Section last week. In the marquee game of the week, Roosevelt snapped a ten season East LA Classic losing streak as they beat Garfield 22-19. The Roughriders are ranked No. 10 this week.

After the eleventh week of action across the Section, here are SBLive’s Top 10 LA City Section high school football rankings. The rankings are compiled by reporter Connor Morrissette and have been released every Monday throughout the fall 2021 season. Today’s rankings will be the penultimate set of rankings we release with the final LA City Section top 10 coming out the week after state champions are crowned in December.

Editor’s note: SBLive creates our own LA City rankings. We differ from the rankings from CalPreps that the Section used to determine playoff seeds and divisions.

Banning didn’t play for the second time last month due to a cancellation. The Pilots finish the year 7-1 and are the No. 1 seed in the Open Division playoffs.

Palisades beat Westchester 41-14 to finish the regular season 10-0. Moses Ross scored two touchdowns in the victory. The Dolphins are the No. 3 seed in the Open Division playoffs.

San Pedro blanked Narbonne 49-0. The Pirates are the No. 2 seed in the Open Division playoffs.

Birmingham got to 5-5 on the season with a 51-7 victory over El Camino Real. Delamonte Barnes and Arlis Boardingham each scored two touchdowns. The Patriots are the No. 5 seed in the Open Division playoffs.

Dorsey beat rival Crenshaw 27-6. Dorsey’s Javuan Lewis scored a 10-yard touchdown in the fourth quarter to put the Dons ahead by two scores. Mychai Williams added to his school record when he intercepted his ninth pass of the season in the victory. The Dons are the No. 1 seed in the Division 1 playoffs and will host Chatsworth in the first round of the playoffs.

Lincoln improved to 10-0 with a 51-6 win over Torres even without QB Ivan Plancarte who was suspended for being involved in a fight. The Tigers, the Open Division No. 4 seed, will host Birmingham in the first round of the playoffs.

Venice moved over .500 (4-3) thanks to their 40-7 win over Hamilton two weeks ago. Thomas Kensinger caught a 90-yard TD and played well at defensive end in the win forcing a fumble. The Gondoliers are the No. 2 seed in the Division 1 playoffs and will host Kennedy on Friday.

In the de-facto Valley Mission League title game, Reseda beat Canoga Park 22-12. Anthony Morris hit Jerry McGee on a 77-yard TD to give the Regents an early lead and they never looked back. Reseda is the No. 3 team in the Division 1 playoffs and will host Granada Hills in the first round on Friday.

South Gate won the Eastern League title outright thanks to knocking off Huntington Park 21-20. They’re the No. 6 seed in the Open Division playoffs and will travel to No. 3 Palisades in the first round.

In an epic East LA Classic showdown, Roosevelt stunned Garfield, last week’s No. 8 team, 22-19 ending a 10-year losing streak for the Roughriders. Julian Quezada rushed for two long TD’s and Carlos Velasquez made one of the plays of the game with a late interception. Roosevelt, the Open Division seven seed, will travel to No. 2 San Pedro in the first round of the playoffs in two weeks.