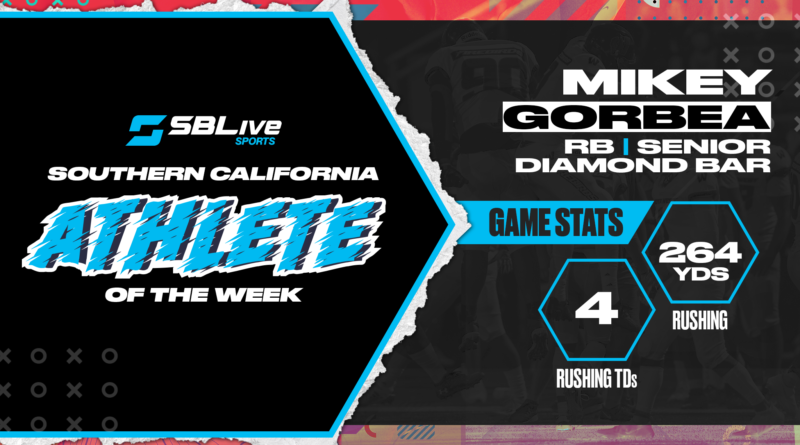 Congratulations to Diamond Bar running back Mikey Gorbea for being voted SBLive’s Southern California High School Athlete of the Week for Oct. 18-24!

The senior rushed for 264 yards and four touchdowns against Nogales on Friday.

Gorbea received 57.9% of the vote, beating out Villa Park QB Nathan Kornely who finished second with 27.28%. Tustin WR Dominick Flores finished third with 8.63% and Tustin QB Tobey Schmidt finished fourth with 3.37%. There were over 50,000 votes tallied this week!

Sergio Cervantes, Citrus Valley WR: Cervantes had a rushing touchdown, receiving touchdown, and returned a punt for touchdown in Thursday’s shutout over Redlands.

Hector Ceballos, Franklin WR: Ceballos had 16 catches for 201 yards and two touchdowns against Lincoln on Friday.

Dominick Flores, Tustin WR: Flores was on the receiving end of nine passes from Schmidt, finishing with 238 yards and three touchdowns.

Amir Bastine, Palmdale DB: Bastine had two interception, returning one for a touchdown in Friday’s win over Lancaster.

Nathan Kornely, Villa Park QB: Kornely passed for 325 yards and three touchdowns and added 58 yards and a touchdown on the ground against Foothill.

Jake East, Agoura WR/DB: East caught seven passes for 142 yards and a touchdown and also had 19 tackles in Friday’s loss to Thousand Oaks.

Kobe Boykin, Orange ATH: Boykin showed off his ability on Friday, finishing with 245 total yards and five touchdowns against Saddleback.

Raleek Brown, Mater Dei RB: Brown rushed for 163 yards and a touchdown in No. 1 Mater Dei’s highly entertaining 46-37 win over No. 10 Servite, in what was arguably the best high school football game of the fall 2021 season.

Donovan Harvey, Elsinore RB: Had 9 carries for 246 yards and 4 TDs as well as a 60 yard kickoff return for a TD.