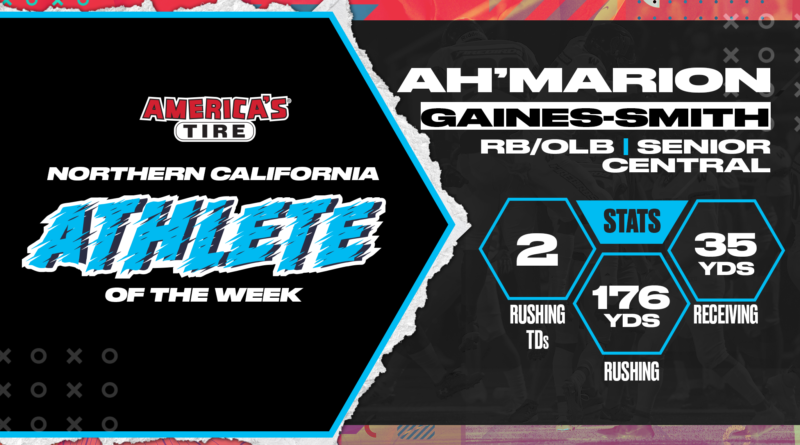 The senior helped lead the Grizzlies to a 35-14 win over Clovis West with 176 rushing yards, two rushing touchdowns, 35 receiving yards, a rushing two-point conversion, and an interception he returned 26 yards.

Gaines-Smith received 55.05% of the vote, beating out Hanford QB Cayden Muir who finished second with 32.4%. Pittsburg WR/DB Zack Card finished third with 5.79% and De Anza LB Justin Ibarra finished fourth with 4.88%. There were over 38,000 votes tallied this week!

Nicholas Coronado, Kimball QB: Coronado went nuclear again, throwing for 500 yards and seven touchdowns to lead the Jaguars over Manteca 58-41. He also ran for 38 yards and a touchdown.

Conner Stoddard, Downey (Modesto) QB: Stoddard completed 15 of 21 passes for five touchdowns and ran for a touchdown in a 49-20 win against Gregori.

Jaden Rashada, Pittsburg QB: In under three quarters of a blowout win against Deer Valley, Rashada completed 13 of 18 passes for 192 yards and five touchdowns, and had one carry for 40 yards.

Cayden Muir, Hanford QB: Muir completed all 14 pass attempts for 282 yards and four touchdowns and had two carries for 94 yards and a touchdown in a 63-0 annihilation of Golden West.

Noah Noyola, Hanford WR/SS: Noyola ran for a touchdown and a two-point conversion, caught for 83 yards and two TDs, led the team with eight tackles (one for loss), and made an interception that he returned 37 yards.

Carlos Moreno, Strathmore RB: In a 56-2 domination of Granite Hills (Porterville), Moreno ran for 75 yards and two touchdowns, had a 45-yard touchdown catch, and returned a kickoff 84 yards for a touchdown.

Sebastian Olivera, Dinuba RB: In a 49-7 blowout of Exeter, Olivera ran 17 times for 186 yards and two touchdowns, and also had a 21-yard touchdown catch.

Tanner Wilson, Sunnyside QB: Wilson only attempted eight passes in a 49-6 rout of Fresno, but he completed seven of them for 214 yards and three touchdowns, and also had three carries for 43 yards and a tub.

Anthony Fernandez, Firebaugh FS: Fernandez had a monster defensive game to lift the Eagles over Mendota 35-21, tallying 13 tackles, four tackles for loss, two sacks, an interception, a forced fumble, and five successful PATs in as many tries.

Demarreya Lewis-Cooper, Enterprise QB: Lewis-Cooper carried Enterprise to a 26-8 win over Shasta by completing five of six passes for 74 yards and two touchdowns to Jahari Johnson, and also running for 159 yards and another TD.

Jalen Moss, Menlo-Atherton WR: Moss went off for 236 yards and two touchdowns receiving in a 38-7 win versus Terra Nova.

Emilio Cruz, Archbishop Riordan QB: Cruz completed nine of 13 passes for 235 yards and four touchdowns in a 48-21 win against Sacred Heart Cathedral Prep. Zachary Jones and Zion Wells were his top targets, and Kemoeatu Kefu had a strong night running the ball for the Crusaders.

Sam Betz, Leigh RB/LB: In a 49-0 pounding of Willow Glen, Betz ran for 140 yards and four touchdowns on just eight carries, and also had nine tackles.

Liam Smith, Hillsdale QB: Smith completed 10 of 14 passes for 245 yards and three touchdowns in a 34-14 victory over Carlmont.

Gabriel Burns, Lincoln (Lincoln): Burns exploded for 213 yards and four touchdowns on just 12 carries in a 59-0 blowout of Rio Linda.

Deovion Hill, Liberty (Brentwood) RB: Hill ran for 184 yards and a touchdown in a 50-20 win against Freedom.

Avalon Agnelli, Branham volleyball: Agnelli had 34 assists and 9 digs in a 3-0 win over Evergreen Valley.