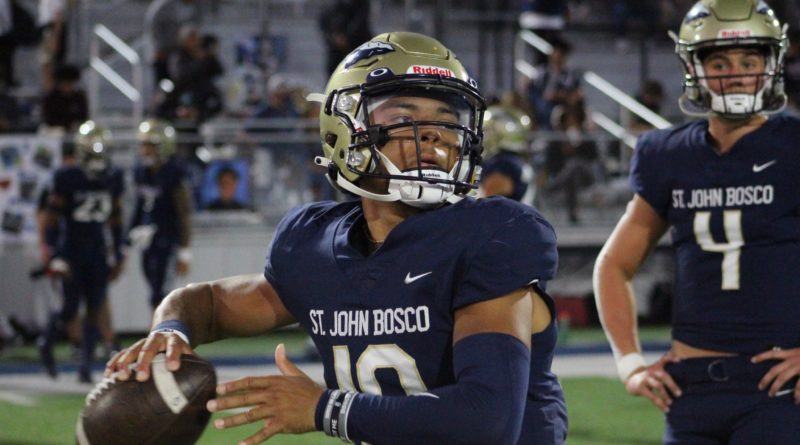 For every other team this season, slowing down Fifita and McMillan has been a major issue, but that wasn’t the case for St. John Bosco. The Braves held Fifita to 88 yards in the air on just 10 completions. McMillan caught only two passes for 23 yards.

It was a defensive masterclass.

“I thought we had a really good game plan tonight,” St. John Bosco head coach Jason Negro said. “We kept a lot of balance and made Noah play left-handed a little bit. I’m just overall pleased with the game plan and the kids executed it.”

Fifita was constantly under pressure Friday night scrambling on over half of his 24 drop backs. He was never comfortable and his receivers struggled to get open against the Braves talented secondary.

“I think sometimes our offense will carry us, but tonight our defense did really good,” Woodyard said. “I’m proud of my guys.”

Servite scored all 10 of their points in the first quarter. The Friars’ touchdown came after a Pierce Clarkson fumble resulted in Servite taking over on the St. John Bosco 19-yard line. Fifita went on to hit Mikey Welsh for a four yard TD that made the score 10-7 Servite with 22 seconds left in the first frame. That was the Friars’ only lead of the game and after the touchdown, Servite didn’t really come close to scoring again outside of an end of the first half desperation heave from Fifita that was intended for McMillan and intercepted by Ty Lee in the end zone.

All year long Servite had succeeded on explosive play after explosive play on offense before meeting St. John Bosco. The Friars didn’t have a single one in Friday’s game.

Before leaving the game in the third quarter with an ankle injury, Clarkson completed all five of his passes for 155 yards and two touchdowns. He hit Colin Chase on a 51-yard TD after evading some Servite pressure in the first quarter to put the Braves’ ahead 7-3 and then connected with Jabari Bates for a 50-yard TD with 1:32 left in the first half which put St. John Bosco ahead for good.

In the second half after Servite had pinned St. John Bosco at their own one yard-line with a punt, Clarkson faked a handoff to Bates and rushed 16 yards to give his team some breathing room before injuring his ankle a few plays later. He was the Braves’ best player in the game and Negro is hoping to have him back for the playoffs in two weeks.

“He’s got a couple weeks off now, we’ll get him ready,” Negro said.

The Friars will surely be frustrated following the loss, but their season isn’t over — they will most likely get the chance at revenge against St. John Bosco in the semifinals of the Division 1 Southern Section playoffs in three weeks time. The playoff seedings will come out on Sunday and St. John Bosco will most likely be the No. 2 seed and Servite No. 3, which will set up a semifinal playoff rematch if both teams win their first round games.

Despite St. John Bosco’s defensive dominance Friday night, Servite’s defense had their moments as well in this one and they kept the Friars in the game well into the fourth quarter. Senior defensive lineman Mason Graham especially stood out.

With 2:32 to play, St. John Bosco led 17-10 and faced a fourth down at the Servite 39-yard line after calling three runs to force the Friars to use all of their timeouts. Negro elected to go for it and quarterback Katin Houser, who switches off every series with Clarkson when he’s healthy, hit Chedon James for a 39-yard touchdown to ice the game.

Even with the struggles offensively, Servite could have had a chance to tie the game late if the Braves’ fourth down try was unsuccessful. The Friars were in this game until the very end. They’ll believe they can win a rematch if that’s the way things shake out.

St. John Bosco had multiple chances to kill the game off before the end of the fourth quarter. The Braves’ lost a fumble in the red zone and had a kick blocked in the fourth quarter, which allowed Servite to hang around.

“If we play these guys again, we certainly can’t do that,” Negro said. If you do, you’re going to end up losing the ball game. So we realize that. We’re going to go back to work on Monday and try to fix things.”