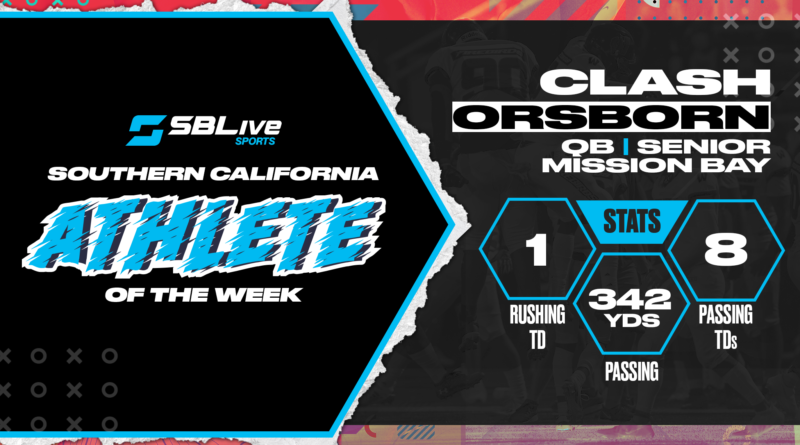 The senior put himself into the San Diego Section record books with his performance on Friday night. He threw for 342 yards and eight touchdowns against Kearny and also rushed for a touchdown in the 60-6 win.

Osborn received 52.82% of the vote, beating out Agoura QB Ty Dieffenbach who finished second with 40.35%. Adelanto QB Keith Reynolds finished third with 5.07% and JW North QB Jaidyn Gamble finished fourth with 0.75%. There were over 29,000 votes tallied this week!

Lucky Sutton, Cathedral Catholic RB: Sutton was unstoppable against St. Augustine, rushing for 272 yards on only 12 carries and finishing the night with four touchdowns.

Anthony Redix, Salesian WR: Redix had a huge night on Thursday, catching seven passes for 131 yards and four touchdowns while also returning a kickoff 85 yards for a touchdown against St. Anthony.

Adrian Perez, Sultana RB: Perez carried only six times on Thursday but finished the night with 229 yards and four touchdowns in the win over Burroughs.

Fox Haugen, Canyon WR: Haugen reeled in ten passes for 122 yards and two touchdowns against Brea Olinda and also returned a punt for a touchdown in the 41-28 win.

David Sagun, Cerritos QB: Sagun passed for 152 yards and three touchdowns against Pioneer and added 93 rushing yards and a touchdown on the ground in the 50-24 win.

Noah Fifita, Servite QB: Fifita was nearly perfect against JSerra on Thursday, going 15 of 16 for 189 yards and six touchdowns in the 53-0 win.

EJ Smith, Warren LB: Smith had 13 tackles, a forced fumble, and an 85-yard pick-six in Friday’s win over Paramount.

Tobey Schmidt, Tustin QB: Schmidt was 15 of 20 for 261 yards and five touchdowns against Kennedy on Friday.