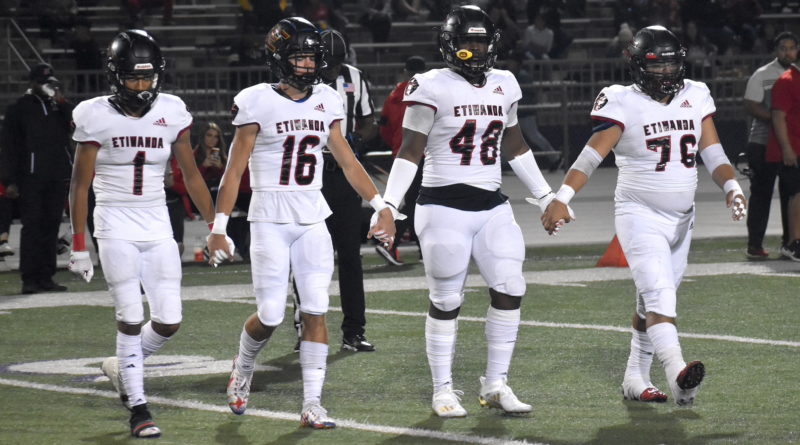 RANCHO CUCAMONGA– Etiwanda claimed at least a share of the Baseline League title for the first time in 12 years on Friday night with a 30-28 victory at rival Rancho Cucamonga. Here are five takeaways from the game:

The Eagles came out firing on all cylinders and jumped out to a 14-0 start in the first quarter. They executed seamlessly, and their size advantage on both sides of the ball was hard for the Cougars to work around.

Etiwanda’s O-line led the way for the team’s quick start on offense. First, Tony McGee capped off a methodical drive with a short rushing touchdown with 8:11 left in the quarter. Then with 3:05 left in the first, Norion Espadron returned a punt 78 yards for another touchdown. Etiwanda’s defense also brushed off Rancho’s first couple drives, and it looked like the Eagles were on the verge of blowing their rival out.

But the Cougars fought back quickly to tie the game up in the second quarter. Their offense’s ability to withstand significant pressure and disrupt tempo by extending plays was key in fighting back from their foe’s first punch. That’s been a theme this season, thanks largely to dual-threat QB Xavier Washington, one of the state’s leading passers, and Rancho’s host of talented receivers.

Rancho Cucamonga got on the board early in the second quarter when Nemo Harrison endured numerous hits to take a short pass to the house. Washington found Jason Harris Jr. for a touchdown on their next drive to tie the game up.

For the first time this season, Etiwanda was at risk of letting a game slip through its fingers. It wasn’t evident though, as the Eagles remained poised and played very fundamentally sound football to re-earn a win.

It started with a red zone stand on Rancho’s next drive, and Etiwanda took a 17-14 halftime lead on a Justin Ludovico field goal. The Eagles’ defense picked up where it left off in the first quarter, thanks in part to an interception from Espadron. Between his PR touchdown, pick, and handful of important receptions throughout the game, he was the top star of the night. By early in the fourth quarter, they stretched the lead to 23-14 via two more field goals by Ludovico.

Rancho Cucamonga wasn’t done battling though, and Washington capped off a strong touchdown drive with a pass to Julian Lundy. It came only two snaps after Lundy took a nasty spill leaping for a ball past the end zone, and landed on pavement. His catch cut the deficit to 23-21, but Etiwanda would stretch it to nine points again on a run from RB Saipeti Maiava J. with 4:13 left in the game. By 3:52, the Cougars had again battled back, as a second touchdown catch by Harris brought the score to 30-28. That would be it for Rancho though, as Maiava and Etiwanda were able to run out the clock.

While the Eagles’ star WR/RB Jordan Williams had a relatively quiet night, the defensive attention he commanded from the get-go helped free up Maiava, Espadron, and QB Zachary Congalton to have strong performances.

“There’s not really a better feeling than this,” said Espadron after the game.”To not only win league, but to win league at their home, is just a great, amazing experience.”

The majority of the Cougars’ games this season have been wins, or close losses, in which sheer grit and a devastating passing game made up for size disadvantages across the field. After the first quarter indicated that the game might turn into an embarrassment, they instead gave an undefeated powerhouse the only run for its money it has seen this season. It was an effort to be proud of.

THE EAGLES ARE BACK ATOP THE BASELINE LEAGUE – AND THEIR RIVAL

Etiwanda did defeat Rancho and Chino Hills in the spring season en-route to going 5-0, even though there was no official conference title race. But this win clinches at worst a tie atop the Baseline League, giving the Eagles their first conference championship since 2009. And they’ll of course be the favorite next week against Upland, against whom they can seal a 10-0 regular season.

Additionally, they’ve now won back-to-back games against their biggest rival. For a school known first as a basketball school – one of the best in the country, to be exact – knocking off multiple rivals known across the state for football is a particularly tremendous accomplishment. Regardless, a league title in the Baseline League, which is consistently one of SoCal’s most competitive, speaks for itself.

THE BEST IN SAN BERNARDINO COUNTY AS WELL?

If Etiwanda can defeat Upland next week to finish the regular season undefeated, they’ll be an undisputed top-two team in the county. Some have them ranked ahead of Cajon, and some don’t, but both San Bernardino County unbeatens have made a strong case this season. And for what it’s worth, the closest call for both was a one or two-point win against Rancho Cucamonga. Let’s just hope the Eagles run into Cajon in the playoffs so the two squads can officially settle the matter.

WHY BOTH TEAMS MIGHT BE IN FOR HUGE PLAYOFF RUNS

As it currently stands, Etiwanda could land in Division 2 or Division 3 if they beat Upland next week. And a loss to the Highlanders would almost certainly lock the Eagles into Division 3. Even if they end up in Division 2, there’s a strong case to make that a sweep of the Baseline League would make them one of the top few threats to go on a finals run. And if Etiwanda goes 10-0 and still gets lumped into Division 3… watch out.

Rancho Cucamonga, now 4-5, is one of the best sub-.500 teams in the section, if not the state. The Cougars have all the makings of an underdog contender in Division 3, which is their likely destination if they beat Damien next week. Should they land in Division 4, win or lose against Damien, they’d have to be considered one of the absolute top threats to take home some hardware.