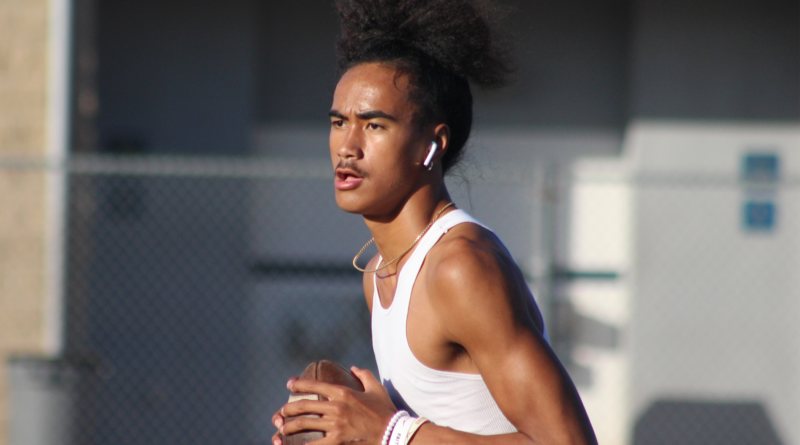 The most dominant defenders and explosive offensive playmakers throughout California high school football are hitting their strides as teams across the state look to lock up postseason berths in the coming weeks.

The brightest stars from every corner of the Golden State have begun making their cases on the field for the 2021 California High School Football Player of the Year award, presented annually to the most outstanding player in the state.

Here are 40 players throughout the state who have separated themselves from the pack during the first nine weeks of the season as SBLive’s leading candidates for the annual award:

Players are listed in alphabetical order.

TOP 40 CANDIDATES FOR CALIFORNIA FOOTBALL PLAYER OF THE YEAR

Anoh has been one of the surprises of the City Section so far this season. Through eight games, the senior has rushed for 1,083 yards and 16 touchdowns for 8-0 Palisades. He’s also caught two scores.

From a recruiting perspective, Berry is the best player in Northern California. The senior defensive back is fantastic in coverage and also an ace on special teams as a returner. Berry even gets some run as a running back and receiver for De La Salle, the No. 2 ranked team in Northern California. He’s a true three phase player.

“He looked like Megatron out there.” Leuzinger head coach Brandon Manumaleuna said of Boardingham after the two teams met in September.

Borders leads the state in rushing yards with 1,819 so far this season as well as rushing touchdowns with 28. He’s averaging a whopping 227.4 yards per game for 8-0 Antelope.

Brown has picked up from right where he left off following his fantastic freshman season. So far as a sophomore, he’s has completed 81 of 108 passes (75%) for 1,311 yards, 18 touchdowns and only three interceptions. Mater Dei is currently the No. 1 team in the nation. Brown’s favorite target is senior receiver CJ Williams, a Notre Dame commit. The two have connected for six touchdowns so far this season, including two against rival St. John Bosco. Williams could certainly emerge as another Player of the Year Candidate if he has a big postseason and the Monarchs win a state title.

Brus is committed to Northwestern. He plays both running back and linebacker for 8-0 Glendora. So far this season he’s rushed for 720 yards and 14 touchdowns. Defensively, he’s made 91 tackles with 17 coming for loss. Brus has also snagged one interception, recovered one fumble and returned a kickoff for a score.

Coronado leads the state in passing yards with 2,821 yards and touchdowns with 36. Kimball is 7-1 this fall.

Lincoln has been one of the top programs in San Diego for the past few years, but they’ve never had a QB as talented as Daniels during their recent run. The senior is putting together one of the best seasons of any QB in California in 2021. So far, he’s completed 79 of 126 passes for 1,829 yards and 15 touchdowns compared to only three picks. He’s also rushed for four scores.

Dickerson is an incredible special teams player. He’s returned four punts for touchdowns and three kickoffs for scores. He does a little bit of everything for Lompc including catching 40 passes for five touchdowns, throwing a touchdown pass and intercepting a pass on defense.

Among players who have played five games or more, Duran leads the state in rushing yards per game with 232.4. He’s amassed 1,627 yards on the ground so far this season to go along with 22 TD’s. Defensively, he’s made 41 tackles.

East has one of the best stat lines of any high school football player in the nation. He’s caught 61 passes for 1,147 yards and 13 touchdowns in addition to making 123 tackles and intercepting two passes on defense. He’s also forced two fumbles. East’s receiving yardage total ranks third in the state.

Fifita plays QB for the state’s top offense. The Arizona commit has completed 139 of 207 passes for 2,242 yards, 29 touchdowns and four interceptions. Fifita ranks seventh in the state in passing yards and 14th in passing touchdowns going up against one of the state’s toughest schedules.

Fletcher has been the best player for 8-0 Cajon this season rushing for 897 yards and 12 touchdowns. He’s also caught 22 passes for 334 yards and three touchdowns.

Fletcher has been another one of the surprises of the 2021 high school football season in Southern California. The senior excels on both sides of the ball. He’s rushed for 716 yards and 13 touchdowns in addition to making 33 tackles and recovering a fumble on defense.

Hernandez is having a monster season for Monrovia. He’s caught 56 passes for a state leading 1,210 yards and 17 touchdowns, which is good for No. 2 in the state.

In seven games, Iamaleava has completed 138 of 234 passes for 1,982 yards, 32 touchdowns and just one interception for undefeated Warren. Iamaleava’s 32 touchdown passes are tied for third in the state.

St. John Bosco has so many talented players on their roster, but James is the one who stands out the most as a Player of the Year candidate due to hauling in 34 passes for 582 yards and six touchdowns so far this season. He’s also rushed for a touchdown. Against Mater Dei, James caught seven passes for 141 yards and a touchdown.

Kelly is second in the state in passing yards with 2,854. He’s thrown 30 touchdowns to only six interceptions.

Lampkin’s 157.8 quarterback rating is the best out of any quarterback on this list. So far this season, the senior’s completed 60 of 76 passes for 919 yards and 11 touchdowns in addition to rushing for 290 yards and five touchdowns for 6-0 Serra. He’s yet to throw an interception.

Leatherwood hasn’t thrown an interception this season and tossed 29 touchdowns for 7-0 Scripps Ranch.

Mission Viejo has been the surprise team of the 2021 high school football season in large part to their defense, which is giving up an average of 16.75 points per game against one of the state’s toughest schedules. Lopez is the lone returning starter on the Diablo defense and so far this season, he’s made 67 tackles and snagged two interceptions.

Mandal has been one of the top players for the Central Section’s top team so far this season. Check out his junior tape here.

Marshall is a walking highlight video. The UCLA commit has rushed for 650 yards and nine touchdowns in addition to catching 22 passes for 447 yards and four touchdowns in his senior year. He’s also returned a punt for a score.

Martin is one of the premier quarterbacks in California and he’s led his Inglewood team to a 7-0 record. In a win against Loyola earlier this season, Martin completed 21 of 30 passes for 338 yards and a touchdown.

Through nine weeks, McMillan has to be one of the favorites for the Player of the Year award. He’s caught 52 passes for 911 yards and 15 touchdowns. He’s also a stud defensive back who’s intercepted four passes. McMillan is committed to Oregon.

Mickey is another stud defensive back. He’s Corona Centennial’s best player thanks his lock down coverage and skills as a kick and punt returner. In a 48-24 win over Norco earlier this season, Mickey returned a kickoff 85 yards for a TD.

Nelson won the California Gatorade State Player of the Year award for his play during California’s spring high school football season and he’s picked up right where he left off as a junior leading his Los Alamitos team to a 7-1 start so far this season. Nelson is committed to Oklahoma.

Nichelson leads the state in touchdowns with 30. He has 23 rushing, six receiving and one on a pick-six. He’s made 49 tackles on defense and forced three fumbles for 7-1 Manteca.

Nunez is second in the state in receiving yards with 1,154 and touchdowns with 17 for 6-2 Beaumont.

Piland is the best player on the Sac-Joaquin Section’s top team, Rocklin. The two-way Air Force commit has made 36 tackles with eight coming for loss so far this season.

Ramirez is arguably the best two way player in the Central Section. So far this season, the junior has rushed for 755 yards and ten touchdowns in addition to making 58 tackles on defense.

Rashada is the top QB in the North Coast Section. Last week, he completed 21 of 28 passes for 335 yards and three touchdowns in a 49-28 win over Brentwood Liberty.

Even though he’s only a sophomore, Sayin has played like the No. 1 QB in San Diego so far this season completing 120 of 173 passes for 1,918 yards, 22 touchdowns and only five picks for 8-0 Carlsbad.

Sutton is the No. 1 running back in San Diego, so he makes the list. He’s carried the ball 95 times for 1,055 yards and 17 touchdowns as a senior. He’s also caught three touchdown passes.

Teu is having a huge season for the state’s No. 1 team in Northern California. He’s rushed for 1,065 yards and 13 touchdowns so far this year. Teu came up huge in St. Francis’ 31-28 upset win over De La Salle in September when he rushed for 213 yards.

Thompson has been undefeated St. Bonaventure’s best player this fall. He’s rushed for 725 yards and 14 TD’s so far this season.

Valentino leads the state in receiving touchdowns with 20. He’s caught 51 passes for 1,048 yards for 5-3 Cathedral City.

Virgin is another fantastic two way player who makes the cut. So far this season for Mt. Carmel, he’s rushed for four touchdowns, caught a fifth and made 52 tackles with 14.5 of those coming for sacks. Virgin is committed to Boise State. He’s also intercepted a pass in his senior year, forced a fumble, recovered two fumbles (one of which he returned for a score) and blocked a punt.

Wallace has hauled in 52 passes for 1,139 yards and 11 touchdowns for undefeated Simi Valley. He’s also intercepted one pass on defense.

Williams has had a huge season for 8-0 Etiwanda catching 35 passes for 689 yards and nine touchdowns in addition to rushing for 221 yards and five touchdowns.