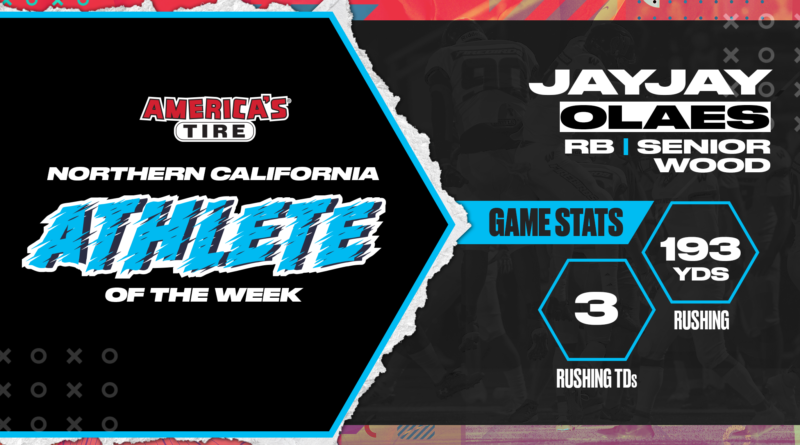 Congratulations to Wood running back Jayjay Olaes for being voted SBLive’s America’s Tire Northern California High School Athlete of the Week for Oct. 4-10!

The senior ran for 193 yards and three touchdowns to lift Wood over Rodriguez 33-25.

Matt McLeod, Menlo-Atherton QB: McLeod lifted the Bears to a 47-46 win against Half Moon Bay by completing 24 of 28 passes for 364 yards and three touchdowns, and running for 38 yards and another TD.

Chase Vehmeyer, Windsor QB: Vehmeyer was essentially perfect in a 56-7 demolition of Maria Carrillo, completing all 15 of his passes for 328 yards and three touchdowns.

Anthony Tarnatore, Bradshaw Christian RB: Tarnatore ran for 205 yards and three touchdowns, and caught for 58 yards and another TD in a 42-6 rout of Liberty Ranch.

Brandon Ramirez, San Joaquin Memorial RB/SS: Ramirez ran for 199 yards and all three of the Panthers’ touchdowns in a 24-17 win against Bullard. He was also second on SJM with eight tackles.

Carlos Moreno, Strathmore RB: Moreno ran for three touchdowns and over 100 yards in a 44-7 rout of Sierra Pacific.

Jaden Rashada, Pittsburg QB: Rashada completed 21 of 30 passes for five touchdowns and 363 yards in a 49-14 win against Heritage.

Casimiro Barragan, Dinuba QB: In a 60-14 win against Selma, Barragan threw for three touchdowns and 208 yards on just seven pass attempts – of which he completed six.

Brandon Graydon, Roseville RB/LB: Graydon helped lead the Tigers to a 51-28 win over Stagg with 159 yards and three touchdowns rushing plus an interception.

Noah Noyola, Hanford WR/SS: Noyola registered 94 receiving yards, three touchdowns and 35 yards rushing, and a team-high 10 tackles (one for loss) in a 57-29 win against Clovis West.

Andrew Moench, Lemoore RB: In his season debut, Moench helped lead the Tigers to a 34-30 win against El Diamante with 157 yards and two touchdowns rushing.

Jakob Hollingshaus, Vista del Lago QB: In not even three quarters of action, Hollinghaus threw for 238 yards and two touchdowns on a perfect 14-14 completion.

Kaize Steverson, Cardinal Newman RB/LB: Steverson helped lead the Cardinals to a 41-16 win against Ukiah with 48 yards and a touchdown rushing, plus five tackles (one for loss), a sack, an interception, and a forced fumble.

Johnny Bauser, Lincoln (Lincoln) QB: Bauser threw for 310 yards and five touchdowns on 10-18 completion in a 45-0 trouncing of Oakmont.

Ryan Vaughan, Vacaville QB: Vaughan completed seven of nine passes for 128 yards and three touchdowns, and ran just four times for 110 yards and a tub in a 49-0 blowout of Armijo.

Corie Radcliffe, Sacramento LB: Radcliffe led the Dragons with 10 tackles and made an interception in a 27-25 win against El Camino.

Jake Elorduy, Christian Brothers QB: Elorduy completed 15 of 23 passes for 293 yards and three touchdowns in a 55-12 rout of McNair.

Joe Repass, Union Mine WR/K: Repass caught for 129 yards and two touchdowns, and went 3/3 on PATs in a 29-8 win versus Rosemont.

Josiah Machado, Sheldon QB: Machado threw for four touchdowns and 198 yards on a whopping 10-11 completion in a 56-7 rout of Davis. He also ran for a touchdown.

Ethan Day, Ripon DE: Day recorded 12 tackles (one for loss), four QB-hurries, and a forced fumble in a 20-7 win against Livingston.

Anthony Garcia, Capital Christian QB: Garcia completed eight of 15 passes for 275 yards and five touchdowns, and ran for 63 yards in a 47-28 win against Del Campo. Kanye Clark was his top target.