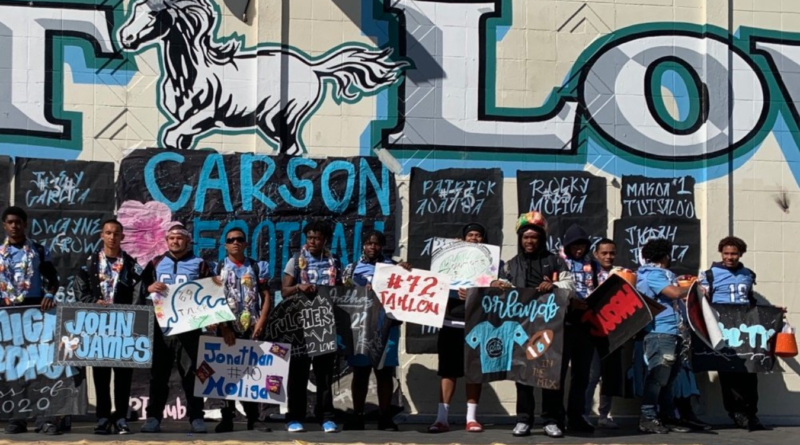 The fall 2021 high school football season continued last week in the Los Angeles City Section. No. 4 Birmingham had the best week of any team as the Patriots shutout Granada Hills 49-0, last week’s No. 6 team.

Check out SBLive’s LA City Section Top 10 football rankings below. The rankings are compiled by SBLive California reporter Connor Morrissette and are released weekly throughout the 2021 season.

Star Banning running back Jakob Galloway may miss the remainder of the season after getting injured in the Pilots’ 56-24 win over No. 10 Carson two weeks ago. The Pilots have a few capable backups including Seth Fao and Caleb Nuhi-Yandall, but losing Galloway would be a major obstacle to overcome.

Palisades won over previously undefeated Hamilton 63-8. Moses Ross caught two touchdowns and returned a kickoff for a third TD in the win. Daniel Anoh rushed for 113 yards and one touchdown.

San Pedro beat up Gardena 69-0. Rob Sarmiento returned a kickoff for a touchdown and then caught four more scores in the victory. All five of his touchdowns came in the first half.

Dorsey improved to 6-2 with a 45-0 win over Hawkins on senior night. They’re clicking at the right time.

Lincoln shutout Marshall 49-0 to improve to 8-0. The Tigers play No. 7 Franklin this week to decide the Northern League championship.

Franklin shutout Torres 47-0. They move up two spots because their offense is becoming one of the City’s best. Last week, receiver Hector Ceballos caught 27 passes in a 28-21 win over Eagle Rock.

Venice squeaked by Westchester 14-13. The Gondoliers stay at No. 8 this week.

Reseda shutout Van Nuys 53-0 and move up one spot.

Carson debuts at No. 10 this week after a 42-6 win over Narbonne. The Colts secured the No. 10 spot because they’ve beaten the teams they were supposed to so far this season.