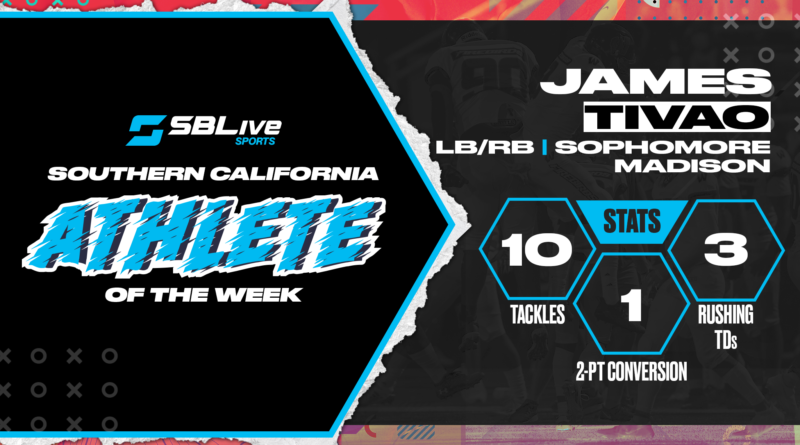 Congratulations to Madison LB/RB James Tivao for being voted SBLive’s Southern California High School Athlete of the Week for Oct. 4-10!

The sophomore rushed for three touchdowns, converted two two-point conversions, and had ten tackles to help the Warhawks take down St. Augustine.

Tivao received 34.1% of the vote, beating out Franklin WR Hector Ceballos who finished second with 25.23%. Westview WR Brody O’Brien finished third with 11.53% and Vista Murrieta WR Grant Wayne finished fourth with 9.4%. There were over 50,000 votes tallied this week!

Katie Carpenter, Poway volleyball: Carpenter had 45 assists, 18 digs and 6 blocks in a 3-2 win over Rancho Bernardo on Oct. 5.

Brody O’Brien, Westview WR: O’Brien reeled in ten passes for 148 yards and three touchdowns to help the Wolverines take down Vista. He also returned a kickoff 60 yards for a touchdown in the win.

Norion Espadron, Etiwanda WR: Espadron had a 66-yard rushing touchdown and a 95-yard kickoff return for a touchdown against Los Osos.

David Herrera, Norwalk RB/DB: Herrera rushed for 175 yards and three touchdowns and also returned an interception 29 yards for a touchdown.

Thomas Rosso, Chadwick QB: Rosso was 14 of 21 passing for 214 yards and four touchdown passes against Rolling Hills Prep on Friday.

Jacob Orozco, Salesian RB/LB: Orozco rushed for 69 yards and two touchdowns and returned a fumble 75 yards for a touchdown against Harvard-Westlake.

Brady Jones, Vista Murrieta QB: Jones was 8-of-11 for 311 yards and six TDs in a win over Temecula Valley

Hector Ceballos, Franklin WR: Ceballos had 3 TDs and 224 yards on 27 receptions as well as 1 interception in Franklin’s 28-21 win against Eagle Rock.