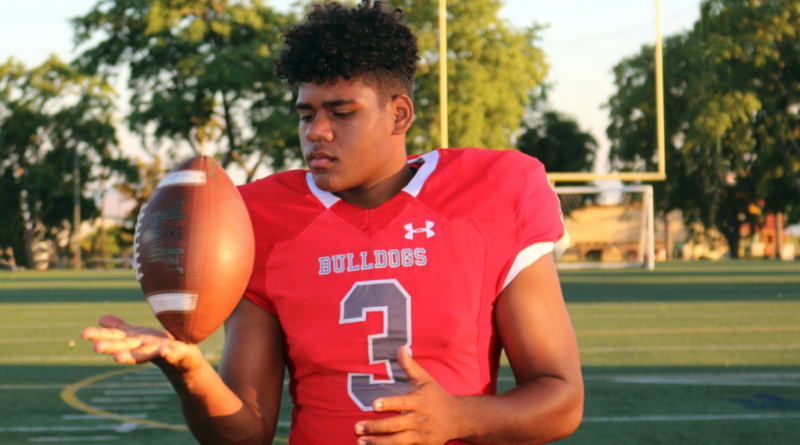 CHINO HILLS, Calif. – When Ayala fell 21-7 to Glendora on Oct. 1, it was an unfamiliar feeling for the Bulldogs. Up until that non-league defeat, they had put together one of the most impressive winning streaks in the Southern Section, previously racking up 22 straight regular season wins dating back to 2018. That stretch included back-to-back league titles in the 2019 and 2020-2021 seasons, during which Ayala was ranked in the top 500 nationally at multiple points.

Football dominance is not unheard of at Ayala, which made three upper-division CIFSS title games as one of the section’s elite programs in the mid-to-late 1990s. Afterwards, the Bulldogs fell off from that premier level, but still remained a very solid program over the past 20 years. Now, they’re on a steep trajectory towards rejoining the Southern Section’s top echelon.

The resurgence can be traced back to 2016, the year that head coach A.J. Gracia and his staff took over at Ayala. It started with steady improvement and incremental successes on the field in the first three seasons, during which the coaches were also developing the talent of the future.

“The fall of 2016, my first year here, we started off 1-4, and made a 5-0 run in league to win the Palomares League,” said Gracia. “We had a great freshman class, and we backed that up with two more great freshman classes. By the time our [first] freshman group was seniors, all they ever knew here was our coaching staff, our culture. By then, they had a sense [that they could] win here. We put together a nice little run.”

Ayala took its biggest leap when it erupted for an 11-1 season in 2019, which included an eye-opening 13-7 upset of Glendora to win the Palomares League.

Despite losing a laundry list of cornerstone seniors, especially on offense, the Bulldogs were at least as dominant in the 2021 spring season. They would defeat Temescal Canyon, Bonita, Charter Oak, Glendora, and arch rival Chino Hills by an astonishing combined score of 177-28.

This season’s 6-0 start included a third straight Battle of the Bone victory against Chino Hills, and more dominant wins over strong programs, such as a 42-7 rout of Tustin. Even after the loss this month, the Bulldogs are still in great position heading into league play. At 6-1 and in good health, they currently project as one of the top playoff contenders in CIFSS Division 3.

One of the most pivotal reasons for the program’s continued success in the 2021 calendar year is also one of the biggest reasons to believe Ayala isn’t even close to done rising. And that would be its star quarterback, Bryan Wilson, who’s already on the verge of a special high school career – and on pace to be by far the top prospect of this era for Ayala.

Not long after starting his sophomore campaign this fall, Wilson became a bona fide Power-5 prospect, earning his first offer from Florida State. Since then, he’s also been receiving significant interest from multiple Pac-12 and Mountain West schools.

As just a freshman, Wilson was the Bulldogs’ day one starter in the spring, and one of its top players throughout the 5-0 season. He’s been even better as a sophomore, throwing for 11 touchdowns 815 yards to just two picks, and also rushing for 82 yards and three touchdowns through six games. The 6-0, 190-pound dual-threat signal caller is a standout physical specimen with an accurate arm that can launch downfield.

He’s is a high school football anomaly in a few ways.

From the get-go, it’s rare to see a freshman starting QB be one of the top players on a great team. Ayala’s recent loss ended any ideas about Wilson potentially going undefeated in the regular season throughout his entire high school career, but he still has a chance to finish his high school career as one of the winningest varsity football players in recent CIFSS history.

Additionally, the poise and consistency Wilson exhibits on the field have been rare for any underclassman QB. And the humble, personable air he maintains off the field belies the fact that he’s already on a steady path to stardom.

As the Bulldogs have risen to prominence, they’ve been routinely beating teams with more established D-1 prospects, or a good few national recruits. Wilson marks the first time in this era that the Bulldogs have had a big-time college prospect of their own.

“The easy part on the field, first of all, is his unbelievable skill set. It’s easy to coach that, but it’s also his coachability,” said Gracia.

“He’s listening, locked in, ‘yes sir’ or ‘no sir’, he’s asking questions. He’s so smart and cerebral, he’s been so well-tutored by previous coaches… Off the field he’s here every day with me, in our meetings, sometimes just hanging out, talking with me or the guys. He comes from a good home, a good upbringing, and I have nothing but respect for him.”

Wilson came aboard at the perfect time, as the program had been surging coming into his freshman year, but needed new young talent to reload around. Despite the challenge of taking over at quarterback as a freshman during the COVID-19 year, Wilson has felt well-positioned to succeed since he first started at Ayala.

“Our seniors this year just lost their first varsity game in a very long time,” said Gracia. “They’ve really only experienced winning… For Bryan, he’s coming into a program where he’s only seen one thing. It took a couple years to build it, and now thankfully I have players like him, and others, to keep it rolling.”

“It was tough last year for me. I felt pressure, but I also was confident in my abilities, and all the seniors believed in me and helped me,” said Wilson. “It was actually the perfect situation. My O-line didn’t allow men to get touched once the whole season… I’ve played with some great players, and a lot of [upperclassmen who are] great leaders.”

“I’m just never satisfied, I always want more… There’s always more you can accomplish,” he said. “We feel like we can go far. People were doubting us last year. We feel like we never get our respect, so we just stop caring about people who doubt us. If anything it gives us motivation and a chip on our shoulder.”

Wilson’s readiness and determination to compete right away was a perfect fit for a program that is hungry to take its next steps. Last season, a bevy of impactful upperclassmen sought to joint the Bulldogs via transfer.

“I grew up in Chino Valley, I’ve coached in this area, there’s plenty of talent in this area,” said Gracia. “This school has some great history, some great teams in the late 90’s and early 2000’s, I’d like to think we’ve put together some great teams. I know Bryan came here to win a CIF championship in the higher divisions. That’s the goal. We plan on beefing up our schedule even more next year.

“We haven’t started league yet, and Bryan is already entering his 13th game. And we plan on playing a lot more games this year. To think that there’s two years more, it’s going to be something to see. I know a lot of guys are going to want to play for him, and we as coaches want to coach him. The sky is the limit.”