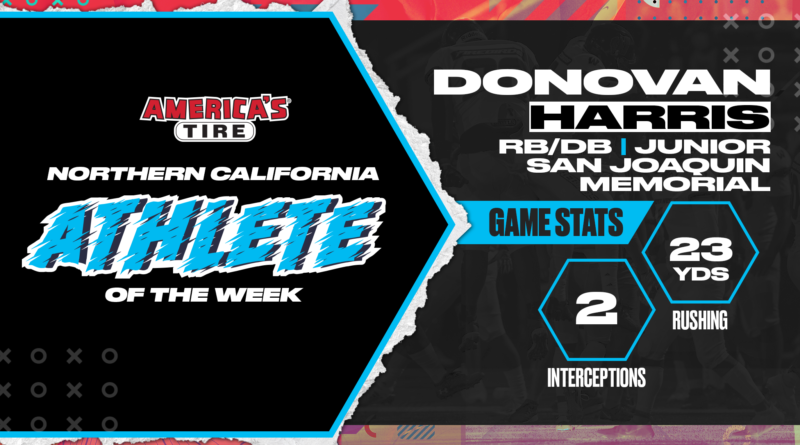 The junior grabbed two interceptions and ran for 23 yards in the Panthers’ 42-7 win against the Madera Coyotes.

Harris received 35.94% of the vote, beating out Hanford QB Cayden Muir who finished second with 23.52%. San Joaquin Memorial RB/LB Aidan Fortenberry finished third with 11.32% and Sunnyside DB Isaiah Lopez finished fourth with 4.17%. There were over 36,000 votes tallied this week!

Kenneth Lorenzo, Encinal DB: Lorenzo racked up a whopping four interceptions and took a kickoff to the house in a 32-22 win against Berkeley.

Michael Bell, San Joaquin Memorial QB: Bell completed 11 of 14 passes for three touchdowns and 161 yards, and also ran for a touchdown in a 42-7 rout of Madera. TJ Hall caught for two touchdowns and over 100 yards.

Ethan Winslow, Kingsburg QB: Winslow threw for 145 yards and four touchdowns on 10-13 completion in a 35-7 victory against Exter.

Davis Smith, Foothill (Palo Cedro) QB: Smith completed five of eight passes for 149 yards and two touchdowns, and also ran for two TDs and over 100 yards in a 56-7 rout of West Valley.

Dyllan Devitt, Monte Vista QB: Devitt went nuclear in a 48-7 rout of Livermore, completing 16 of 18 passes for 396 yards and five touchdowns, and running for 24 yards and another TD.

Cole Boscia, Monte Vista WR/K: Boscia caught for 191 yards and two touchdowns, and also turned his lone kickoff and PAT attempts into a touchback and an extra point, respectively.

Tyler Tremain, Folsom QB: Tremain threw for six touchdowns and ran for a touchdown in a 58-6 trouncing of Del Oro. All his production except for one touchdown pass came in the first half.

Elias Mullican, Rocklin WR/DB: In a 26-6 victory against Granite Bay, Mullican caught two interceptions and a touchdown pass, and finished with over 50 yards of total offense.

Derek Houston, Rocklin LB: Houston racked up 20 tackles, 15 of which were solo.

Aiden “Ponyboy” Taylor: Taylor ran for 125 yards and two touchdowns in a 32-14 win versus Oakdale.

Ethan Archuleta, Elk Grove QB: Archuletta led the Thundering Herd to a 42-35 win against Sheldon by completing four of five passes for 142 yards and two touchdowns, and running for 159 yards and three tubs.

Nicholas Coronado, Kimball QB: Coronado was one of numerous Jaguars who dominated in a 58-6 crushing of Linden. He threw for 271 yards and six touchdowns on 21-30 completion and running for 63 yards and a TD on just three carries.

Naaman Branyan, Sacramento QB: Branyan completed nine of 11 passes for 249 yards and four touchdowns as the Dragons blew out Oakland 56-0.

Derrick Kirkendall, Downey (Modesto) RB: Kirkendall ran for three touchdowns and had a touchdown catch in a 57-6 demolition of Modesto.

Jake Boyd, Los Gatos QB/K: Boyd completed 13 of 22 passes for four touchdowns and 327 yards in a 35-0 rout of Santa Clara. He also averaged 65 yards a kickoff on four kicks, and went five for five on PATs.

Frank Arcuri, Monterey Trail QB: Arcuri helped lead the Mustangs to their first win of the season, 38-7 against McClatchy, by completing four of eight passes for 77 yards and a touchdown, and running for 70 yards and three TDs on just six carries.

Jacob Guevarra, Patterson QB: In a 52-7 blowout of Atwater, Guevarra carried the ball just five times for 128 yards and three touchdowns, and threw for two touchdowns as well.

Anthony Tarnatore, Bradshaw Christian RB: Tarnatore ran for 133 yards, a touchdown, and a two-point conversion, and also caught for a touchdown in a 36-7 win against El Dorado.

Scott Smith, Union Mine RB: Smith ran for 120 yards and four touchdowns in a 41-0 rout of Galt.

Matt Macleod, Menlo-Atherton QB: McLeod threw for 241 yards and two touchdowns and ran for a TD in a 35-24 win against Oak Ridge.

Jakson Berman, Valley Christian QB: Berman completed 10 of 14 passes for 138 yards and two touchdowns, and ran for 71 yards and a tub in a 28-12 win against St. Ignatius. Jurrion Dickey was his top target.

Luther Kemauri Glenn, Wilcox RB/DB: Glenn exploded for 329 yards and six touchdowns rushing to lift Wilcox over Mountain View 42-27. He even added a forced fumble on defense, and led the team with 25 receiving yards.

Darrell Carr, Liberty (Brentwood) WR/DB: In a 42-14 win against Bishop O’Dowd, Carr led the Lions with 52 yards and a touchdown receiving, and also grabbed a pick.

Dylan Smith, Vintage RB: Smith ran for 186 yards and five touchdowns in a 55-14 victory against Petaluma.

Jorge Hernandez Jr., Antioch RB: Hernandez helped lead the Panthers to a 31-12 win against Casa Grande with 188 yards and two touchdowns rushing. He also caught Antioch’s only two receptions of the night to put him at 200 yards of offense.

Liam Keaney, Rancho Cotate QB: Keaney lifted The Ranch over Pleasant Valley 46-33 by completing 16 of 21 passes for 283 yards and two touchdowns, and also running for a pair of TDs. Sailasa Vadrawale had a strong night as his top receiver.

Luke Souza, Acalanes QB: Souza threw for 312 yards and five touchdowns on 13-16 completion, and also ran for a touchdown in a 56-18 win over Castlemont. Dante Montgomery and Will Berrien had big nights catching the football, and Trevor Rogers had two touchdown catches as well.