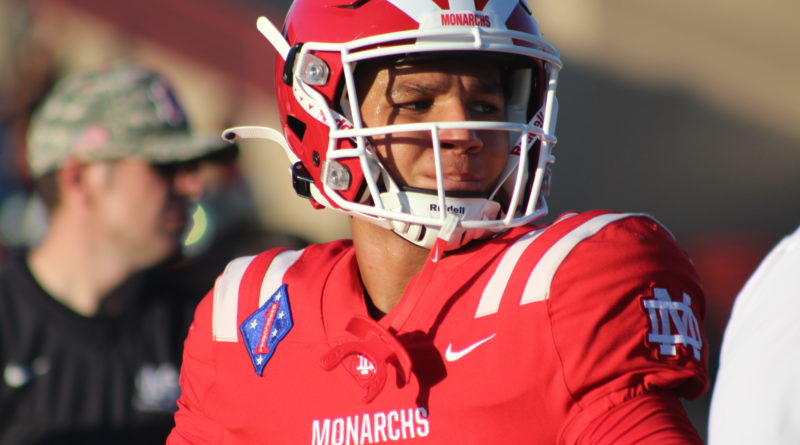 SANTA ANA, Calif. — Mater Dei sophomore quarterback Elijah Brown is so calm and cool on the football field that one teammate jokingly accused him of apathy.

“Sometimes it looks like he doesn’t care,” Mater Dei senior receiver CJ Williams said with a smile before a midweek practice. “But you know he does.”

“Everything Elijah does is at a different pace,” Mater Dei head coach Bruce Rollinson said. “He’s slow. It’s not arrogance, it’s just the way he moves. From afar I watch him and he just kind of saunters.”

Brown plays like that too. The game isn’t too quick for him. He’s seemingly never rattled.

“The words that I use to describe Elijah are cool and collected,” Williams said. “I saw Bryce Young all throughout high school. I spent my freshman and sophomore years with him. You can compare those two in that light. They’ve got a similar demeanor.”

With so many accomplished Mater Dei quarterbacks coming before him – including JT Daniels and Bryce Young – the comparisons were bound to come.

“Let’s face it,” Rollinson said. “It’s on people’s minds. We spoiled the crowd with JT and Bryce. Now everyone’s getting comfortable with Elijah.”

He isn’t on their level yet, but Brown has earned the right to be compared to Daniels and Young — he’s been that good. Brown is 10-0 as a starter for the Monarchs and has thrown 28 touchdown passes to only three interceptions. He is 2-0 against rival St. John Bosco and he’s received scholarship offers from some of the top schools in the country, including USC.

His trajectory is clear. But how did Brown get here? And what is in store for him over his next two-and-a-half years at Mater Dei?

BECOMING MATER DEI’S STARTING QB WAS YEARS IN THE MAKING

Brown’s father, Kenny, is Mater Dei’s junior varsity offensive coordinator and he had his son attending camps at the school for years prior to enrolling.

“I remember Elijah being around here when he was in the fifth grade,” Rollinson said. “He was in all of our quarterback academies and he was in our four vertical program.”

Brown even shadowed Young at Mater Dei as an eighth grader.

“Bryce is a really cool dude,” Brown said. “He’s helped me and given me pointers throughout the year.”

After Monarch practices, when Brown was still a middle schooler, Kenny would have his son throw to Williams.

“Keep feeding Elijah some knowledge, talk to him,” Williams remembers Kenny telling him.

All of this preparation made Brown comfortable at Mater Dei. When the Monarchs had a quarterback competition ahead of the 2021 spring season, he felt like he had a leg up, despite being a freshman.

“I was a lot more comfortable knowing somewhat what we were trying to do offensively and what kind of coaching staff we have here,” Brown said. “Having my dad coach here has also made it easier.”

Even with the added benefits from being around the school, Brown still had to perform in the spring to win the job. Back then, he didn’t always look as good as he does now.

“There would be days where I’d go, ‘Elijah’s the guy,'” Rollinson said. “And then he’d go out and lay an egg and I’d start looking at one of the other kids and think maybe they’d be the guy. But we settled on Elijah because when we mapped it out, he had the most consistency.”

Looking back seven months later, that decision clearly ended up being the correct one.

“You look at where he’s at, it’s pretty remarkable to me,” Rollinson said. “I won’t lie.”

Despite the success, Brown still has much to learn.

Before he was asked about it, Brown didn’t know about the offseason lunch meetings he’ll begin to have with Rollinson in January.

The two will discuss spring football and watch film. According to Rollinson, the lunchtime sit downs “are just what has to be done if you want to be great.”

Brown also hasn’t been truly subjected to an old fashioned Rollinson ream out yet.

“I learned this in the 90’s with some of the great ones – it’s wrong to take their heads off in practice even though you want to and even though once in a while I do it, but it’s not good for the kid or the offense,” Rollinson said. “Behind closed doors, the great ones, which Elijah’s going to become, you can motivate them and say, ‘hey you weren’t worth a (darn) yesterday. Get it done today.’ I haven’t done that with Elijah yet, but it’ll be coming, sure.”

To the outside world, Mater Dei’s sophomore quarterback is already great, but Rollinson sees a lot of room for improvement.

“We’ve given him some fuel for the race car, but the race car can go a lot faster,” he said.

Rollinson wants to see Brown continue to work on strength training and the mental side of football.

“That mental part comes with game and practice experience, but more importantly it comes through video and studying and working with our QB coach Taylor Kelly,” Rollinson said.

Brown, who traveled to Oxford, Mississippi on Saturday to take in the Ole Miss vs. Arkansas game, already possesses many of the qualities consistent with the “great” Mater Dei quarterbacks. He’s tough. He’s a natural athlete. He’s a hard worker. Now it’s all about refining his game – at least the parts that need refining.

“He can always keep developing his footwork, his drop backs and arms strength, all of that stuff he can improve on but in terms of the intangible stuff, he already pretty much has it down to a T,” Williams said.