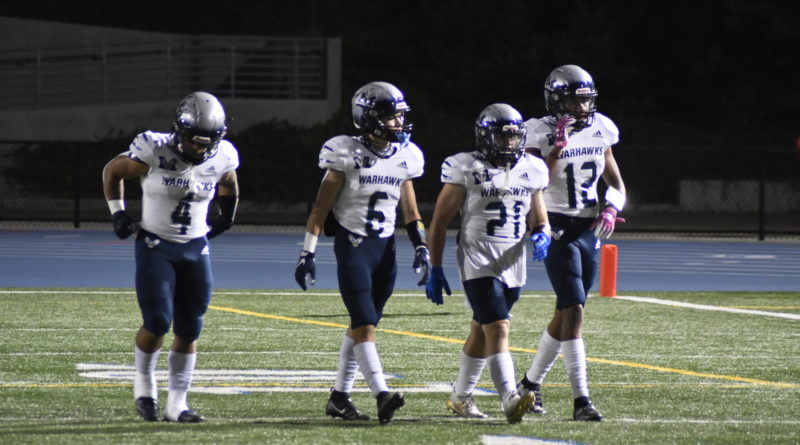 SAN DIEGO, Calif. – It took nearly three quarters for Madison’s offense to find a rhythm in Friday’s Western League showdown against St. Augustine, but when they did the Warhawks responded with a big final quarter to secure their fifth win of the season, 29-22. Below are three takeaways from the game.

James Tivao’s 12-yard touchdown run as the third quarter buzzer sounded and subsequent two-point conversion rush knotted Madison and St. Augustine at 14 to begin the fourth quarter. After stopping the Saints, Madison drove back down the field and scored their third touchdown of the night when Reggie Johnson connected with Jake Jackson on a 22-yard post across the middle. Battling field goal issues earlier in the game, the Warhawks gave Tivao a chance at a second two-point conversion. He delivered to give Madison a 22-14 lead.

St. Augustine responded with a drive of their own that was capped by an Isaiah Pressley 43-yard touchdown run on third and long that looked to catch the Warhawks off guard. Pressley, who led all rushers with 201 yards on the night, then equaled Tivao with a two-point conversion of his own, squaring the game up at 22.

After Madison was forced to punt, St. Augustine’s plans for a game-winning drive were shuttered when Madison defensive back Sean Webb jumped the pass, grabbing an interception and setting the Warhawks up with excellent field position.

“I was ready to jump on it,” Webb said postgame. “I was watching film and watching their tendencies, I’d seen the quarterback look and I went for the ball.”

Madison utilized their power rushing attack to drive down inside the Saints’ five-yard line and following a lengthy injury delay, saw James Tivao punch in his third touchdown of the night with only 72 seconds left to play.

The Saints were unable to do much with the ball, completing a pass to midfield as the game clock expired, handing Madison their fifth win of the season and their first in the Western League.

MADISON LEANS ON THE GROUND GAME

Outside of a 22-yard hookup between Reggie Johnson and Jake Jackson, Madison made a conscious effort to run the ball throughout against the Saints.

“I think our offense was okay, we just kept stubbing our toe and kind of ending drives with stupid stuff,” Madison Head Coach Rick Jackson said.

In the second half the Warhawks employed a power run formation that resulted in two successful two-point conversions and the game-winning touchdown by James Tivao.

“Usually, it’s hard to run (power sets) against St. Augustine,” Rick Jackson said. “We just felt like some of our run game up front when we were matching up, they were winning those battles so we tried to get a little bit more leverage and they really didn’t adjust as much as we thought they would so we stayed with it down the stretch.”

Madison, who relies heavily on their underclassmen this year, got significant contributions from that group on Friday night.

Junior’s Reggie Johnson and Jake Jackson connected in the third quarter for their sixth touchdown hookup of the season, a score that gave Madison their first lead of the night.

Junior defensive back Sean Webb made the defensive play of the night when he jumped a pass by St. Augustine’s Carlo Salvatierra and grabbed an interception, setting up the game-winning score for the Warhawks.

“We’re really young, we start two seniors,” Rick Jackson said of his group. “We started the year rough and really didn’t play good football and made a lot of mistakes… I love our resiliency and how we stay together as a team, it’s a really good group and the chemistry is awesome.”